by clibinarium September 02, 2013
Clibinarium- A while back we previewed the first of our Garde Françaises models, and it would be fair to say they have caused us nearly as much trouble as they did their Anglo-Dutch adversaries.

First though, the good news; the Garde command. The first thing to note is that these are the first Warfare Miniature figures to be done with the new blank dollies that we've spent so much time over. They are practically invisible under the sculpting; only really the bases show.  However they do lend a high degree of consistency in terms of proportion and posing. this will become more apparent as we continue to build up figures using these dollies.

I tried to follow the wonderful Giffart plates as much as possible. My favourite figure by far is the officer doffing his hat in the plate Le salut de L'Esponton  sur le poignet ; there was no way I was neglecting the possibility of sculpting that pose, as there was something quintessential about the period held within it.

One rather peculiar thing about these officers' uniforms is the fact that they are quite varied. The sergeant does not seem to have much lace on his coat; much less in fact than the rank and file. The officers have different patterns on the cuffs and coats in some cases. It is perhaps easier to see these differences in the coloured Knotel plate which clearly takes Giffart as its source. The officer with the zig-zag lace pattern on his cuffs is an ensign, but as he and the other officers are open-handed they can be used as either officers or ensigns, if you are not picky about absolute accuracy. Indeed with a change of colour scheme they could probably serve as any regiment's officers. Note also the sergeant's odd polearm; the lower cross bar has one straight arm and one bent upwards. While it would be more usual to see symmetry here it is very clearly depicted by Giffart so I have followed his work in this instance.


Again I have gone with the early, informal tricorn look on some of the officers, the brims of the hats depicted by Giffart are very wide and would look huge if worn plain and unpinned. An awkward technical aspect of these men is that all but the drummer appear to have carried their swords on a belt under the coat, which then protrudes though a vent in the skirt. This means that the swords have to be a part of the figure, rather than a separate item, as with most Warfare figures. Separate swords make for easier casting and a more realistic look to the finished figure, but can only be done properly when appended from an belt worn over the coat.

Because the book concerns itself with drill in the main there are no close up images of the drummers, though tantalisingly they can be seen as small figures in the background of many of the plates. Though French drummers are sometimes depicted with the drum secured high under the left arm they can be seen in these pictures to have the drum at the more usual waist height, so I went with that (in some instances they appear to have it on the right hip, which is somewhat unusual). For the drummer's lace, it was hard to find any good contemporary images, most being from well after 1700. I had suspicions that the "chain" pattern familiar from the 18th century may not have been adopted at this point. The only image I could find that was identifiably from the 17th Century appeared to be dated around 1680, which while a little early seemed to me to be better than a little late (the high position of the cuff suggests the 1670s onwards). I should write "identifiably depicts" rather than "identifiably from" as it is likely a Victorian era painting, so I don't have complete confidence in it, but the other figures in the set do seem to follow Giffart. There is a set of plates by the artist Eugene Leliepvre, which cover the French army from about 1660 to 1790 which do have an illustration of a drummer from this time, but unfortunately I don't have a copy and they are quite hard to come by. The thumbnail version of it that I have seen seems to follow this plate, so I was willing to take the risk on it


As an aside the link I gave to the plates of L'Art Militaire François seem now to be broken, but you can see many of them in this Youtube video (courtesy of Ralph Mitchard). Great music too. 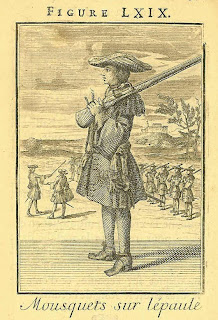 You may recall from the previous post that the rank and file Garde figures had a bit of a tortured gestation. It turned out not to be over; they were cast up and while the pikemen turned out fine, but there was a problem with the musketeers.

I had selected the pose Mousquets sur l'épaule for these figures as seen in the Giffart plate. However, metal figures have to be cast in a flat mould, so while they are 3D models, they have to have a 2D aspect so they fit in a mould which is in two halves. Imagine taking any figure and putting it between the palms of your hands, as if closing a book. Generally there won't be a part of the figure sticking out into the flesh of your palm. The figure will have a single axis, usually running from shoulder to shoulder, if there is another axis, especially if it is a right angle to the primary axis, then there will be problems in casting.

If you think of the Mousquets sur l'épaule pose you can imagine an axis running from shoulder to shoulder and the rest of the body is pretty much in that plane. However you'll also notice that the musket balanced on the shoulder forms a right angle with that axis, and projects backwards and forwards from the primary axis.
In order to get round this problem I decided to reduce the degree of this projection by keeping the pose but moving the musket to a more vertical position so that it projected "up" more than "back", which you can generally get away with because it then doesn't project back any further than the depth the body of the man makes in the the mould. Problem solved.

Except...by moving the musket to a more vertical angle it contacts the brim of the hat, so I anchored each musket to the side of the hat with a small amount of putty. It becomes entirely evident why hats started to be turned up at the side and why tricorns were worn at an angle; the musket will tend to knock off the hat if shouldered vertically. There is very little to no space between hat brim and musket barrel, so it was thought better to attach them at  the point of contact to ensure a tiny space between would not cause casting problems.
The figures were cast up and they came out all right, but there was a slight flaw. The pressure of the moulding process had bent the musket a bit. This is not unusual, and the musket can be bent back by hand easily enough, this time however the fact that the musket barrel was attached to the hat meant that part stayed put and the portion below bent, giving a distinct kink on a couple of the figures which was not easy to bend back. Then it dawned on us that not only was that an issue, but after all the initial problems with proportion the original musket had been slightly too short anyway. Neither of these two issues were major, but both Barry and I tend to be unhappy with even slight flaws, and we weren't content to let these figures go ahead.

We chatted about how to solve it and I thought the ideal solution was to have left separate arms, but I didn't expect that to be practical as generally speaking castings have to be single piece, because often customers don't like sticking figures together. To my surprise Barry wasn't averse to that suggestion, and since we didn't think it was a huge amount of work ( nobody had complained about having to do so with the cavalry ), we decided to go ahead with that approach.
With that decision came distinct bonuses; now the original pose of the figure in Mousquets sur l'épaule could be much more closely depicted as the issues with two axes rather than one were no longer present. Also the original decision of  having to pick either matchlocks or flintlocks (but not both) was no longer necessary, as the arms were separate we could do two arms, one with a flintlock and one with a matchlock, allowing people to decide what sort of mix their Gardes would have. As far as I could tell the arrangement of equipment did not differ significantly depending on the type of firearm (i.e. the matchlock armed men don't wear the twelve apostles), so this idea seemed to work. 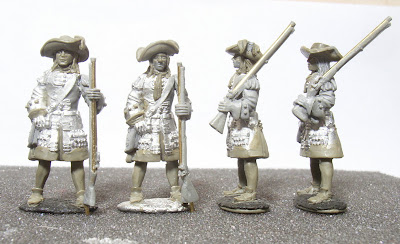 So the musket arms were amputated, new arms were made, and at Barry's suggestion we did two more arms with grounded muskets to widen the possible poses further. Not being completely happy with how I had done the cartridge boxes I took the opportunity to improve them. Originally I had just etched in the pattern on the flat surface of the covering flap as that's what seemed to have been done in reality on its leather surface. Having seen how that came out on the first group cast figures I wasn't convinced that it worked; the detail was quite shallow and might disappear under a layer of paint. I decided to make it much more raised and slightly exaggerated, so that a wash or drybrush would show it up nicely. Had I know how long this would take I might not have started; it had to be done on each of the figures separately, since the correction was being made after the dolly stage (had it been caught earlier a correction to the dolly alone would have solved everything). You can see in these photos that the putty that has gone a nasty green colour shows that they have been through the moulding process once already (the heat discolours it), the light grey putty shows where corrections or alterations have been made. 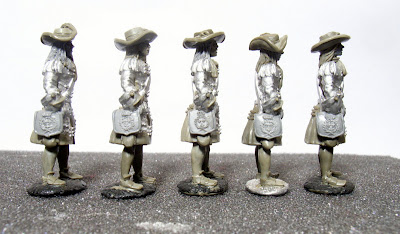 Now we  have to keep our fingers crossed and hope that these revisions cast properly. A lot of issues are in the lap of the casting gods, and it is as important to the final outcome to have a good caster as it is a sculptor. This will have hopefully given you some insight into the process of getting figures made, and the little pitfalls that can delay things. Sometimes particular figures can feel jinxed, so I am somewhat wary of the Gardes Françaises until I see them successfully moulded and in the palm of my hand.
Share Share on Facebook Tweet Tweet on Twitter Pin it Pin on Pinterest
Back to The League of Augsburg