Glorious Obsession Part 1; The War diaries of my toy soldiers 1990 - 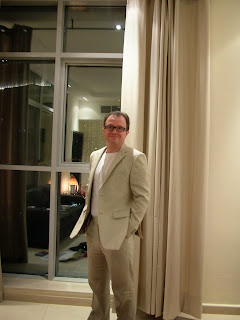 Barry Hilton - I would admit to having some form of OCD. I recheck plugs and door locks a lot. I am always looking at my passport (yes I have forgotten it on the odd occasion so that possibly justifies the frequent safety checks). I think all of that is trumped by my strange need to record my wargaming exploits in private journals. These secret dossiers have been seen by a handful of other people apart from myself over a 20 year period.
﻿﻿
I recently cleared out the loft in my late Mum's house (my childhood home) and came across acres of stuff I had typed on an old Remington manual typewriter belonging to my Dad (he never used it like most of the gadgets he bought). I found campaign stories following the epic fights of my Airfix Assault Regiment Wotan (converted with bits of loo paper painted as SS camo capes). This unit was fired by my consumption of the Leo Kessler (aka Charles Whiting) novels popular around 1972-76 which were quite racy reading for a 12 year old! 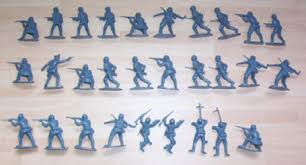 I found naval battle narratives from my other obsession which was drawing plan views of warships on paper, cutting them out and fighting sea actions on my bedroom carpet (authentic blue acrylic weave). Hardly C.S. Forester but I seemed to enjoy writing it. All of this was done before my 13th birthday.

At high school I ran a NATO v Warsaw Pact Naval campaign and recorded it in the form of newspaper cuttings and articles illustrated with pen drawings and harbour diagrams of air raids. This was done in a series of little red notebooks which I also found. 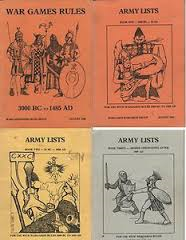 I recorded every single battle fought using WRG 6th Edition with my two 15mm armies: Viking & Mongol. In two hardback ledgers I drew up every battle map, orbat, points value, casualty and enemy casualty in points loss.Each entry has four disposition drawings; The set up T3, T7 (if it got that far) and End. I have no idea why.I remember when first married, coming home from the club on a Sunday evening, lying on the floor in front of the TV and writing up my journal with my coloured pencils. My wife has stuck with that for 28 years! The Viking-Mongol phase was back in 85-87.

When I finally got into the Grand Alliance (aka Grand Dalliance or Glorious Obsession in my case) my compulsion to record seemed to assume pandemic proportions. I created eight enormous ring bound books (on a binding machine borrowed from work!). A4 sized, 200 pages in each, plastic covers with occasional sketches. Each 'volume' represented a different army and army of service. I had books for Louis XIV's Foot and Horse, Grand Alliance Foot and Horse, Swedish & Russian units, British regiments and two battle compendiums. Things were truly getting out of hand. 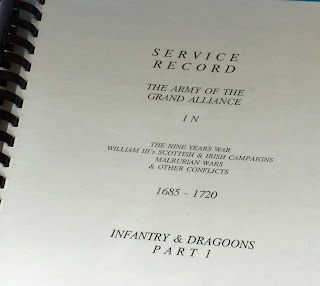 I have decided to allow you fellow obsessives a peek into these strange volumes mainly because it is something that people have asked about many times but never been able to see.  Read more in my next Blog on my chronic wargaming condition!
Share Share on Facebook Tweet Tweet on Twitter Pin it Pin on Pinterest
Back to The League of Augsburg