Getting more used to the rules, having added in some of my own detail and generally loving the game play, I decided it was time to get a bit more ambitious with the Dutch Wars naval action.

I now have enough ships painted and had so far resisted putting anything larger than a 3rd Rate on the table but that self-denying rule is now by the boards.

This battle was a surprise in that I thought it would last longer than the 15-18 turn games thus far played. Not a bit of it. It was done and dusted by the end of Turn 6. It was carnage from Turn 2 and the result was not as anticipated.

It is a pretty straightforward action set somewhere off the Suffolk coast. A raiding squadron of Dutch warships in search of prey is unfortunate enough to run into a powerful but numerically inferior group of ships of the English Red Squadron.

The objective is to vanquish the enemy! . 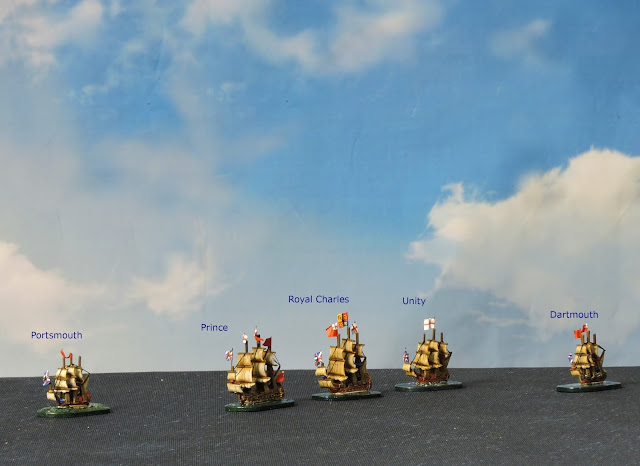 
The English held the windward position but both commanders had equal ability meaning neither gained advantage for initiative. As it happened the English admiral won the initiative in four of the six turns including the first.

As the Dutch were sailing towards the coast from a north easterly direction they had to steer a course between two islands to gain the open coastal waters beyond. Both sides used strategic movement in T1 but the independent English 5th rates made great speed and so the remarkable battle fired up from the outset.


HMS Portsmouth with the wind to her back sailed right across the channel and was able to rake the Dutch flagship with an astonishing first broadside. She scored six hits which caused a 'catastrophic damage' check on De Zeven Provincien. This resulted in the flagship's steering gear being shot and the rudder jammed dead ahead which meant for the entire battle her course was set!

The Dutch won the initiative on T2 and used it to throw their Battle Division forward. The flagship had no option but to steer dead ahead but the following ships turned to starboard to brings their guns to bear on the enemy. The Fireships also bore to starboard to squeeze through the channel into the open water whilst the English battle line turned to port veering away from the channel.

With the English also winning the initiative on Turn 3 and many ships cramming  around the tight channel three spectacular events occurred. HMS Dartmouth had raced to box in the line of fireships trying to sneak into the open water. She raked the lead vessel Rotterdam at close range causing at catastrophic damage check.


The highly combustible fireship exploded and vanished in a matter of seconds. Simultaneously, the formidable HMS Prince was subjected to heavy fire from three ships causing her magazine to explode and rendering her partially disabled. The unmanouvreable De Zeven Provincien had no option but to plough straight into HMS Portsmouth causing terrible damage, demoralizing her crew and killing her captain in the process.

Things were not going to plan for the Red Squadron but on T4 the initiative again went to the English who had to work hard to try and protect the damaged HMS Prince.

The Dutch Battle Division left the flagship to disentangle itself from the now sinking HMS Portsmouth and tried to cut the enemy line in front of HMS Royal Charles.The fireship Susanna  attempted to attack the English flagship but was easily fought off. The English crew in turn grappled the smaller ship, boarded and captured her. Susanna had already been abandoned by her crew.  Every Dutch ship passing the stricken HMS Prince shot into her forcing the giant to strike her colours having been reduced to a wreck.


The Groot Hollandia came alongside HMS Royal Charles, both intending to board each other but the Dutch 3rd rate had the initiative and attacked the English flagship. In a fierce back and forth combat the English marines prevailed and the Groot Hollandia  was taken and quickly cut adrift with a small prize crew aboard because De Zeven Provincien was looming through the smoke astern of the English ship and on course to smash into her on account of having no control of her steering.

The Dutch at last grasped the initiative in T6. De Zeven Provinicen crunched into the stern of HMS Royal Charles further damaging both vessels. They grappled and the Dutch boarded the English ship capturing it in a lightning move which saw a dice differential of 7 points meaning - immediate surrender. At this point with both capital ships lost and one frigate partially sunk, the remaining two English ships broke off and ran for port.

It was a bloody battle, over quickly and containing several notable incidents. I declared it a Dutch victory. The Dutch lost one vessel sunk, two captured with damage to three more including the Vrede being partially de-masted however, their flagship was intact and two well armed ships remained operational. The English lost their two largest vessels one destroyed and the flagship captured. A frigate was destroyed and remained barely afloat whilst both HMS Unity and HMS Dartmouth were damaged to an extent.