by augsburgeroberst May 03, 2019
Friend of the blog and GNW enthusiast Dannie Fogleman undertook some evangelical work on behalf of Beneath the Lily Banners at South Bend, Indiana recently.
Here is the tale of his adventures with some BLB novices.....


We did a BLB3 GNW game at the Seven Years War Association in South Bend, Indiana recently.  It was based on the actual battle of Malatitze in 1708. This was a dawn attack by about 9,000 Russian infantry and three regiments of dragoons against a rather isolated camp of eight Swedish battalions and the Östgöta cavalry regiment.  We thought this would be a good game to teach novices the mechanics because there is no artillery and no terrain issues.
We used eight Swedish battalions and a regiment of four squadrons of cavalry.  Amazingly, most of the regiments I had to use were actually at the battle.  The Russians had 16 battalions of infantry in four brigades, including a brigade of Guards, and three four squadron regiments of dragoons.  To keep it simple, all the Swedes were Veteran and all the Russians were Drilled, with the four Guard battalions as Elite.
As in real life, the Swedes were encamped in a large meadow, a couple of miles from their main army.  The Russian plan was to attack the camp with their infantry across a marshy, shallow river area, while the cavalry came out of the marshy woods (at one end of the table in our game) to attack the flank.  The idea was to destroy the whole detachment.  In real life, the cavalry showed up late, if at all, having gotten lost, and the main fight was with the infantry.  The Swedes fought off the Russians until Charles XII arrived with the vanguard of the relieving main army and the Russians retired.  Both sides claimed victory.
In the game the camp was in the middle of the table with the Swedish units spread around in it.  Two  brigades of Russian were set up 15 inches from the nearest Swedish unit.  The Russian commander was average and the Swede one level better.  On the first turn the Swedes could give orders to no more than half of their units, which were mainly to form.  The Russians fired with four dice and the Swedes with three and the Swedes were treated a pike and shot for close combat.
The interesting thing about this scenario is that the Russians are the attackers.  Anyway,  both our play test and the actual game came out close to historical results.  The Russians inflicted significant damage but were unable to overrun the Swedes, who caused more casualties.  My regular group, who had played BLB3 before, and who did the play test, and all the players at the convention, most of whom were novices, went out of their way to say they really liked the rules.  You can tell when people are just being polite and when they really mean it.  Lots of people at the convention asked about the figures and complemented me on them.
Unfortunately, I only have one picture.  It is of the Östgöta cavalry giving the Russians a hard time after having already chased a third regiment back into the woods. 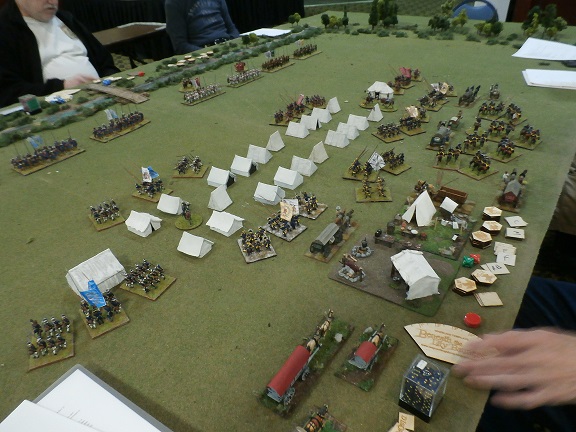 Initial set up.  The Swedes are scrambling after finding eight battalions of Russians almost in their camp.  They don’t know how many more Russians will show up or where they are coming from.  In fact, up to twelve squadrons of dragoons may show up out of the woods at the far end of the table. 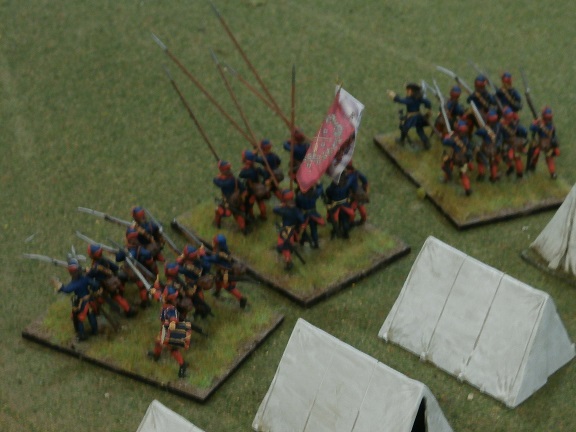 Narke-Varmland hoping to get a form order! 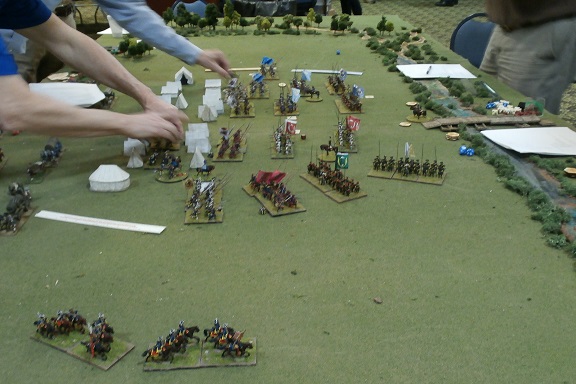 The Russians are close by the time the Swedes can form a line, but it looks like the Swedes will follow the saying that a good offense is the best defense.  Note the Östgöta cavalry swinging around for a flank attack. 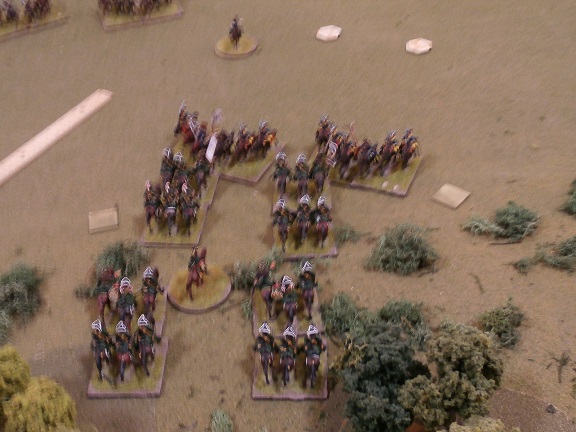 The flank attack did not occur because the Swedish cavalry had to turn to face a brigade of Russian dragoons coming out of the woods.  Unfortunately for the dragoons, the Russians were still in column when the Swedes charged them. 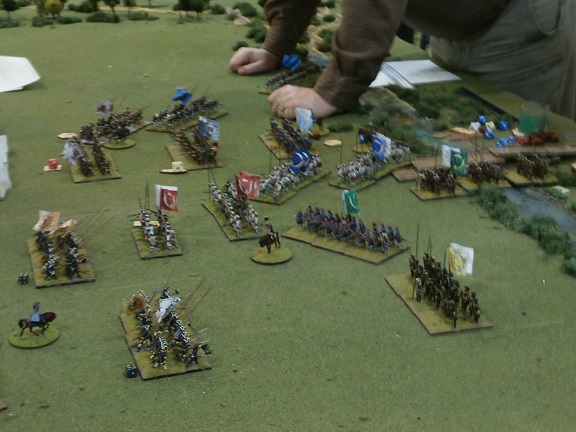 Several charges by the Swedish left pushed the Russian Guards Brigade back, making it difficult for the Russian second line to get onto the field, but, eventually a third brigade began to arrive. 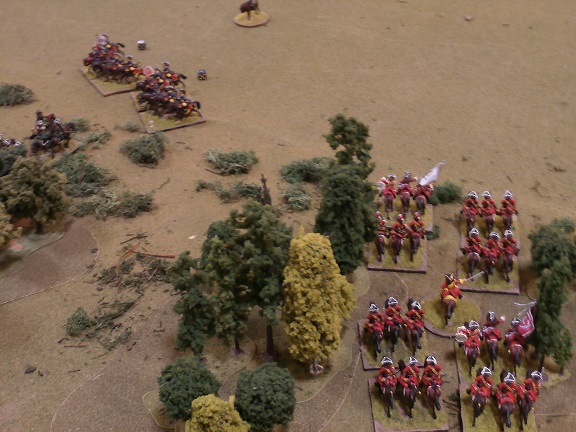 Having chased off the first Russian brigade, the Swedish cavalry found another coming out of the woods. 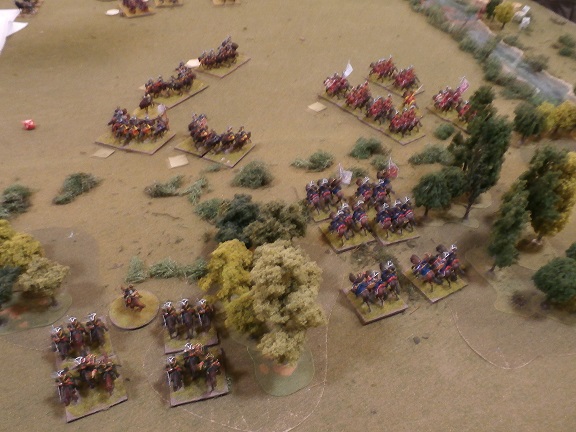 The Östgöta cavalry send a squadron to stop the red-coated Russians, only to see yet another brigade of blue-coated Russian dragoons in the wood. 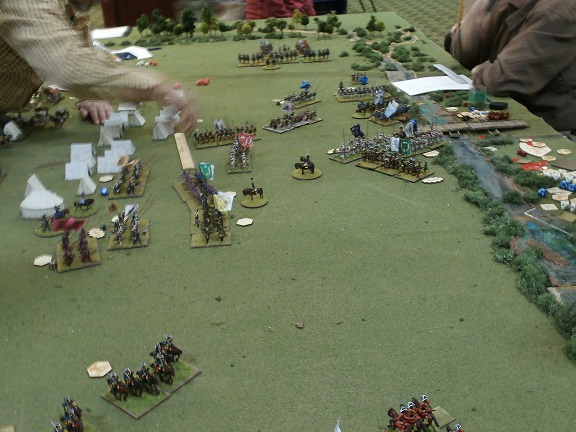 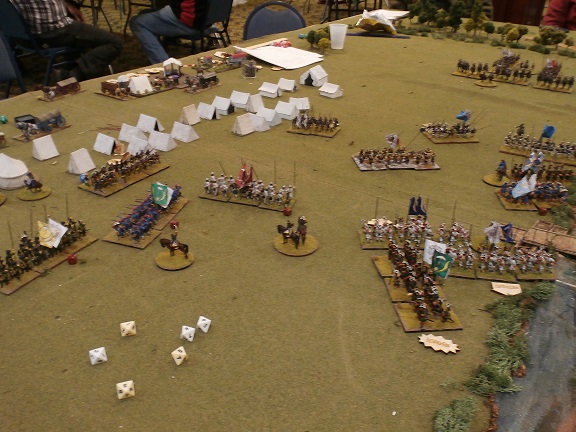 The Russian left has caused serious damage to the Swedish right, but Charles XII appears in the distance with a regiment of dragoons and a couple of battalions.  The Russians know that this is the vanguard of the main Swedish army and decide to call it a day.  As in real life, both sides claimed victory.