Guest post: On the trail of the Jacobite War in Ireland Part 3 - The Fort

by Barry Hilton July 16, 2017
Friend of the blog Peter A shares his some of his Irish campaign experiences from Kinsale 1690....
The Fort – Kinsale
Kinsale at 7.30am on a Sunday morning. Clear, bright, cold. Sun rising over the remains of the old James Fort. The harbour still and quiet – waiting for the day. 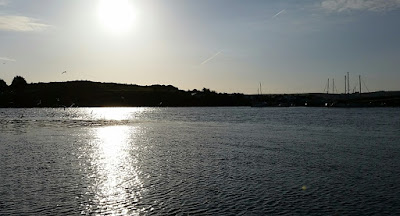 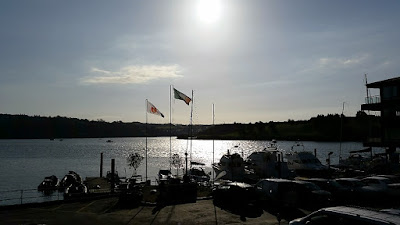 That peace – an enchanted moment – the sea and the shape of the hills is a view untouched for a thousand years – any modern intrusions fade away - what we see today is what they saw in 1690.
And the memories of that time flood back… the old Fort was taken by the Dane General Tettau at the head of 800 men. The garrison was far more numerous than had been reported by deserters – suggesting only 150 men. In fact, there were 450 but as the assault went in an explosion amongst the barrels of powder killed many of the defenders and the Fort was quickly carried – 220 Irish were killed and the rest made prisoners… some tried to escape across the water in boats to the New Fort. But the tide was against them and shot from the shore despatched most of them. 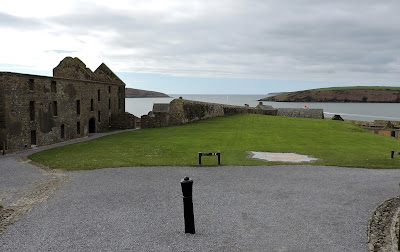 And so to Charles Fort. The new Fort. One of the best-preserved star Forts in Europe. It followed the principles of Vauban in terms of the ramparts, the bastions and the covered way. However, it was adapted to the uneven topography of the site and its principal role was seen as a coastal defence Fortification to prevent foreign naval forces entering Kinsale harbour. Since sieges rather than field battles were by far the most common form of conflict in our period, it is exciting to visit a place that witnessed a real siege in 1690. History seeps out from the massive walls… 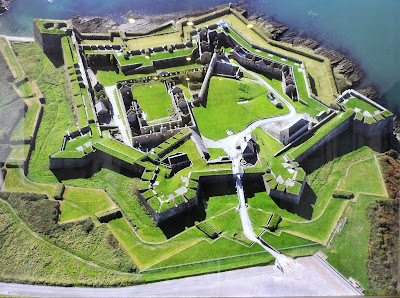 The best way to appreciate the shape and scale of a Vauban-style Fort is from the sky. This photo hangs in the gatehouse – which now serves as the entrance to the museum. The white gravel walkway from the carpark across the bridge to the main gate is at the bottom of the image. The huge bastions and grassed walkways look strong and not to be easily conquered… 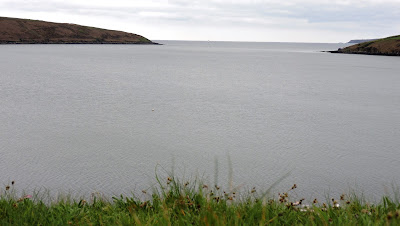 Once inside there are stunning views out to sea. What a vantage point! Head straight south and you would eventually hit Brest on the Brittany peninsula and then the Bay of Biscay and Spain. From beyond that horizon, James first arrived in Ireland here in Kinsale - full of hope and expectation of the recovery of his English throne. 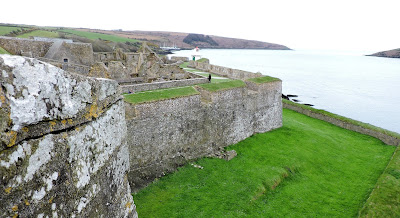 The sheltered nature of the wonderful deep harbour is clear – an attractive anchorage for an enemy fleet. When the Fort was built, the threat was anticipated to come from this sea – essentially from France…! It was constructed in the early 1680s, and Charles Fort was the most expensive Fortification in Ireland. William Robinson, Superintendent of Fortifications was the designer. The Earl of Orrery laid the first stone and when the Lord Lieutenant of Ireland, the Duke of Ormond visited the site in August 1681, for obvious diplomatic and sycophantic reasons, he named it after King Charles II.

The key weakness of the place - as is seen in these pictures beyond the scaffolding and the close-up view -  is the rising high ground where a besieger could look down on the Fort, bombard it with cannon and mortars and chose his point of attack. Despite its seemingly massive strength, the new Fort was in fact vulnerable to attack from land-based forces.
The sheer labour, the danger and difficulty of besieging a Fortification is brought to life in these models in a display in one of the garrison buildings. 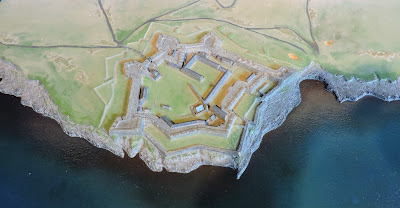 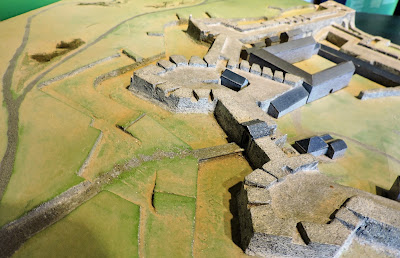 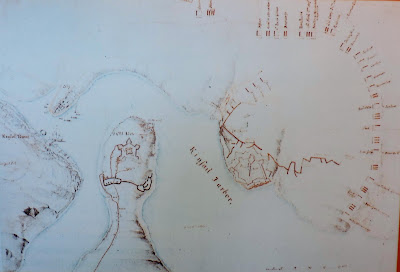 This siege map of the order of battle of the Williamites forces – attributed to Thomas Philips who did many drawings of Irish harbours and Fortifications - though frustratingly faint - is a great illustration of where the troops were camped and where their trenches ran.  Philips felt the new Fort was badly-sited being overlooked by the high ground inland. The English and the Danes prepared to make two attacks. As we look we see the Danes under the Prince of Württemberg positioned on the right or East– and the English on the left or West.
After his first success with the taking of James Fort, my Lord Marlborough now sent a summons to the Governor of the substantial New Fort. Sir Edward Scott was no pushover. He answered coolly that ‘it would be time enough to capitulate a month hence…’. Marlborough lacked the necessary siege equipment and artillery which was on its ponderous way from Cork. Once the batteries were in place however, the Allies expected to effect a breach in a few short days…
Trenches were opened and the saps which can be seen in the jagged red lines - headed steadily towards the counterscarp - while the heavy cannons were hourly anticipated. 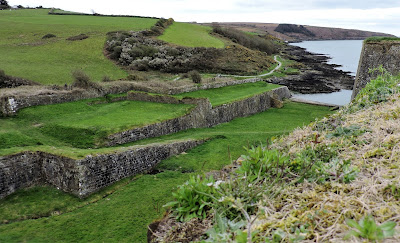 The Danish high ground, the covered way and the Cockpit bastion 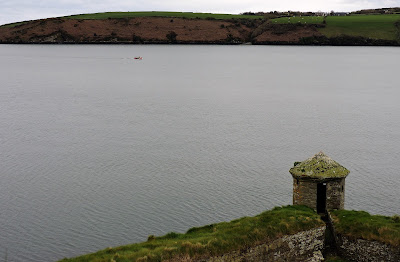 A guerite – a sentry box – one of my favourite Vaubanesque architectural features!
Here is the high ground where the Danes were encamped. They sapped from this ground towards the Cockpit or East bastion – aiming to make a breach in ‘the long wall’ that ran from here to the seaward Charles bastion on the cliff edge. 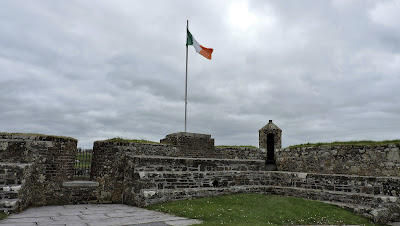 The Irish tricolour – it is April 2016 and memories and notices referring to the centenary of the Easter Rising are everywhere. Here is another brick sentry box on the outermost point of the Flagstaff bastion. Also note the musket firing platforms. The Flagstaff is the largest bastion and designed to be used as a citadel if needed as a last refuge.

A good view of the gun platform, with the grass ramp up to the firing position. The area alongside the ramp was used as a parade ground. The platform has commanding views and just like the casemated seaward facing Devil’s and Charles bastions, its job was to defend the harbour from enemy intrusion.
The dénouement came with the arrival of the cannon from Cork and the establishment of the batteries. A breach capable of being assaulted was soon made by the Danes in the long East wall in front of them. The saps there were now in pistol range of the covered way and the troops were ready to attack. The siege had lasted 13 days and the last 5 days had witnessed continual cannon fire. Sir Edward now felt that the honours of war had been satisfied and he opened negotiations with the Earl of Marlborough on surrender. The white flag was raised and the chamade was beaten.  Good terms were agreed and the Governor and his feisty wife Lady Scott led the garrison out through the breach – she in her coach - with drums beating and flags waving. Twelve hundred survivors marched out from Fort Charles and headed for Limerick. 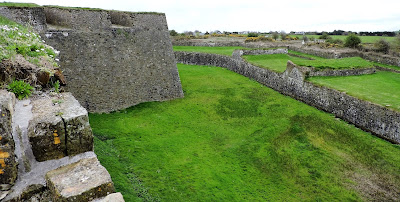 the Cockpit bastion. They exited here.
Final views of the Fort, the covered way

Kinsale in the background. Beyond the bridge and entrance point across the dry ditch. After the surrender, Brigadier General Churchill, Marlborough’s brother, became Governor of the Fort.
James Fort is visible on the brown promontory in the middle distance and the port of Kinsale and its landlocked, deep safe harbour is on the horizon.
These defeats closed the access to the south of Ireland for French shipping and support. It was the beginning of the end. James had landed here in Kinsale in 1689. And now also from here he scuttled away down these steps and into his lonely boat. ‘ Will ye no come back again…?’