by quindia January 07, 2020
Clarence Harrison - I hope the turn of the calendar finds everyone well! Looking across my various blogs, 2019 was a very poor year for posting, even though I was quite productive. I painted loads of things I didn't bother with photographing.

I wanted to start off the year with some new units for Beneath the Lily Banners!

The first was painted for my collection by THE Barry Hilton and based by me to match the rest of my armies. I'm calling it Hilton's Regiment (though it could be used for many different early regiments with a flag swap). 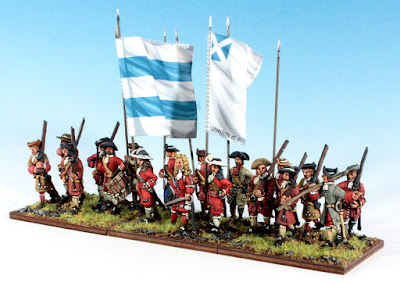 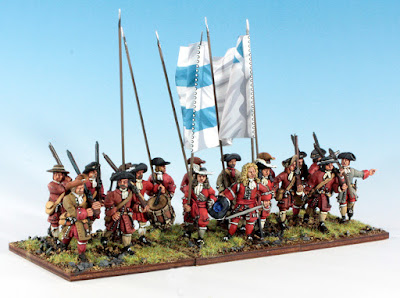 These were actually painted for me back in 2018, but I realized I hadn't gotten around to photographing them, so I wanted to have the properly displayed. They were blooded for King William's cause in three separate games at the Guns of August 2018... In one game they failed to get into the mix because of where they were deployed, were ignobly ridden down by horse in another, and routed TWO Jacobite battalions in the third... 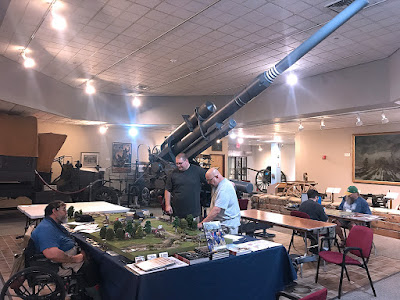 But wait! That's not all!

When Warfare Miniatures released the Volunteer/Militia codes (V01-06), the first thing I did when I got stock stateside was to pull three battalions for myself. I decided it was finally time to add these to my collection. Here is the first battalion, finished just this evening! 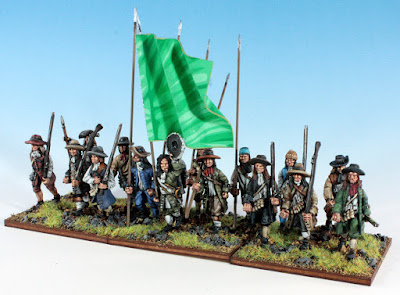 These models were a joy to paint and will be Irish Militia or early 1689-90 Irish Foot and may be used for either side. Not sure I like the color of that standard now that I'm looking at the photograph. As with all of my models, the flag is removable so it's easily changed. If I want to depict a two-flag unit, I can also press one of the pikemen into service as an ensign.

Finally, another project I hope to see come to fruition is the expansion of half a dozen units to five-stands for small-scale actions...

I painted these two stands for the Garden til Fods specifically for this project, but others will likely come as three-stand battalions in similar coat and facings to existing regiments that I can combine with said regiments - killing two birds with one stone. I already have two battalions of Dutch Guard and two battalions of grey coat/red facings foot so I'm currently at three battalions for this project so far. The cool thing is that a regulation BLB squadron is actually TWO scale squadrons, so my expanded forces can use my existing two-stand units for horse and mounted dragoons!

More on this in the future, but first up will be the other two battalions of militia!