by Clarence Harrison January 18, 2016
Clarence Harrison - Here's one of the units for the defenders of Derry at the Battle of Penny Burn Mill, Lieutenant Colonel John Cairns Regiment of Foot... 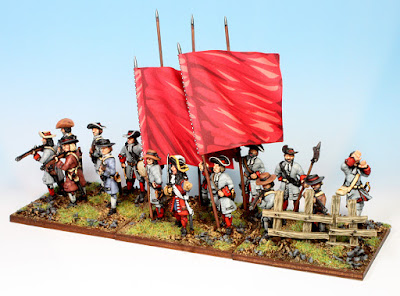 The uniform and flag of the unit are unknown. Many of the units on both sides at Derry were probably dressed in civilian clothes, so I've used a unit with a bit of a motley appearance. The flags are plain, the sort militia might carry, however in the case they are meant to represent the famous 'bloody flag' of Derry.

We're also not sure exactly which infantry units marched in support of Captain Murray's attack (most were detachments of musketeers rather than organized battalions), but Lieutenant Colonel Cairns was very active in the defense of the town and seems a good choice for our game.