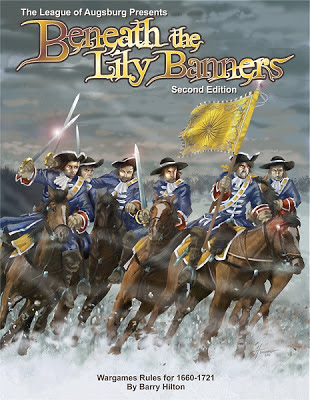 Clarence Harrison - Well, it is all but set in stone that Barry and I will be attending Historicon 2016. Vacation time has been scheduled, travel options are being considered, and plans are underway for a participation game of Beneath the Lily Banners that we will run at least once a day (and maybe twice depending on what else we get up to).

The theme for Historicon 2016 is 'Cavalry - Mounted Warfare Through the Ages'. Our game will feature the attack on Penny Burn Mill on April 21st, 1689 in which Captain Adam Murray led a sally from the walls of a besieged Derry in an attempt to clear lines of communication to the north of the city. There are various accounts of the battle and all do not agree on the details, force compositions, etc. but it is certain that the initial assault was carried out by several large formations of horse. Likewise, the Jacobite counter attack contained lots of mounted soldiers, including Galmoy's Regiment of Horse. You can expect to see piles of Warfare Horse scattered across the table!

We are still juggling the details and I'm sure things will evolve as we go forward, but all of it will be featured here (well, most of it - we're going to save a few surprises for July). We'll cover designing the scenario, some of the how's and why's to consider beyond man to model ratios when picking units, painting the models, building the terrain, vignettes, and anything else that comes up along the way.

I am looking forward to every aspect of this project - can you tell? It's still November right? We haven't been to Historicon since 2010 (which was a blast - see here). Is it too early to start getting ready? I don't think so - looking at my sketches for the table there is a lot of work to do, not to mention documenting it all for the blog!