Colin Napier explains how he came to love his Huguenot Brigade!

Call me soppy, call me naive (trust me I’ve been called a lot worse at home) but I firmly believe that at heart wargamers are gentle, romantic souls. Why else would they spend their time refighting long forgotten wars; researching failed causes and ineffectual dramatic gestures; worrying about shades of grey (of uniforms before the Google bot gets excited) and cuirass fashions.
And there’s nothing much more romantic than an exile, just ask any passing shortbread salesman who’s on his tartan tin. 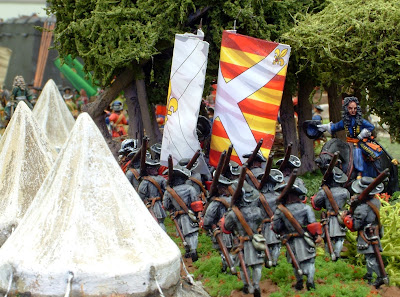 Colin's very own Huguenots muster from their camp to defend the lines at Athlone.
I was aware of the Huguenots in the same way I’m aware of say the X Factor or Marmite, astoundingly important to some people and likely to elicit a strong opinion one way or the other but I’d never really come across them until one Saturday morning in Derby when Barry (of this parish) introduced me to a brigade of grey coated infantrymen.
Whilst my eyes gradually squinted the finely painted (by Bob Talbot) Warfare minis into focus (there had been a long, heated and most importantly lubricated discussion in the bar the night earlier that morning about… something vitally important to Western civilisation that alas eludes me) Barry explained a little of the background to the three foot regiments and their history and in passing mentioned that giving La Caillemotte’s regiment some pikes was a bit of a joke, which I gave a weak smile at and resoundingly failed to get.
Despite my infernal die rolling, the Huguenot’s carried the day for that battle and acquitted themselves well in the longer engagement that followed over Saturday afternoon and in to Sunday (for those aficionados of my gaming style there were no officer casualties that weekend – the only weekend blip in the general carnage I tend to inflict on the upper echelons of any army that falls under my command). By the time I was trundling back up North (I was on a cross-country train – trundling is a generous adjective) I realised that another period bug had bit and my shelves were about to strain under a further weight of alloy in the shape of little metal men. Those who know me might wonder if I needed another army but when it comes to metal men and the wargamer, where does need come into it? 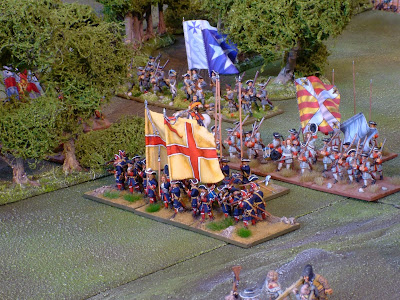 More Ireland action: Bob's Huguenot's at Partizan in 2012.
As Barry had mentioned at the weekend, the Huguenots make a good starter project for the Williamite Wars in Ireland if you’re considering nailing your colours to the Orange mast. There are only four units, three foot and one horse and the regiments were involved in many of the major engagements in the 1689-91 campaigns. Add a cannon, maybe a sprinkling of commanded shot and you have an effective brigade sized force for BLB provided you don’t bump into the fabled Saxon Horde.
And there’s that romance I mentioned too. How did a bunch of French Protestants find themselves in Ireland fighting for an English King against Bourbon troops (not to mention another English king)?
In part 2 Colin will treat us to more details of his Huguenot project.
Share Share on Facebook Tweet Tweet on Twitter Pin it Pin on Pinterest
Back to The League of Augsburg