by Clarence Harrison May 02, 2014
Colin Napier - And so to the final pieces in my Huguenot hugging extravaganza…
Following on from the infantry I picked a colour for the cavalry facings that matched the flag.
For each of the regiments I did test pieces using grenadier figures none of which made it on to the final stands. These have been used to make up a combined grenadier force which can either be used as commanded shot in BLB or a faction in Donnybrook.
Finally there are the officers and as regulars at League of Augsburg gatherings know, I go through these at a fair rate so I decided I would need more than the usual singleton for a BLB brigade.
First up is Schomberg himself receiving a dispatch from a mysterious officer clad in green facings (painted before a final decision on infantry uniforms was made). There are also three general officers - I was tired of grey by now and decided to embrace the idea that officers could pretty much wear what they like. 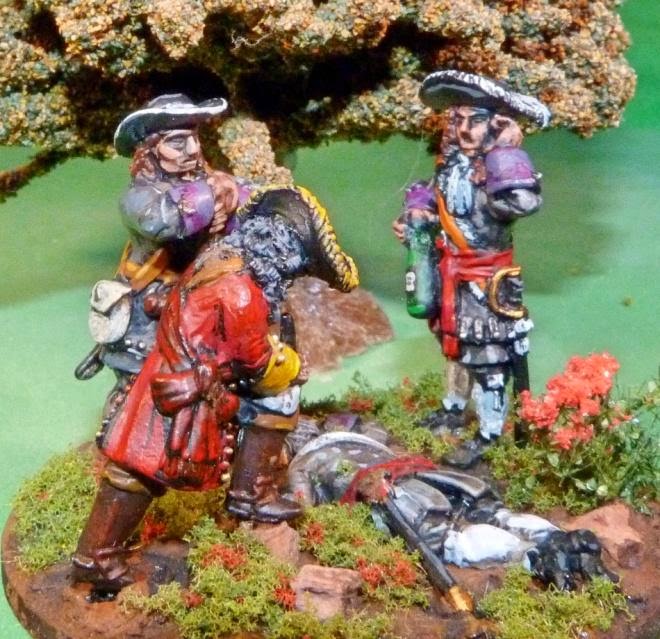 And finally an all too common occurrence in my campaigns, the battlefield promotion. Though this chap is being sensible having got hold of a bottle and is now dictating his will – guess there’s another round of close combat on the way.

And thus my collection of Huguenots for BLB was complete; though there’s always the chance Miremont’s Dragoons will make a late appearance. Currently I’m putting together a Donnybrook faction of Huguenots and coming up with some interesting special rules for them. To be honest these owe more to Dumas (and in one case Monty Python) than history but they’ll be fun…
(Editor: Thanks to Colin for sharing his collection... we will feature a part four when he gets his Donnybrook forces sorted!)
Share Share on Facebook Tweet Tweet on Twitter Pin it Pin on Pinterest
Back to The League of Augsburg