I am an Idiot

by Clarence Harrison September 01, 2015
Clarence Harrison - So, yeah. I have painted a pile of Warfare Miniatures infantry and I have an equally large pile to go. Changing it up always helps break the monotony of the grind when you have a lot of models to paint so I thought for King James II's Royal Irish Foot regiment I would use the excellent Warfare Miniatures Maison du Roi models. 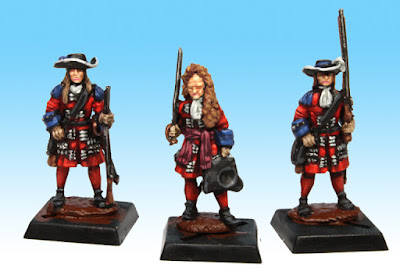 Pretty cool right? Of course, this regiment was one of the few to field two battalions. They also had pikes so I need to paint the pike stands to go behind them. I am only looking at another forty-five of these lace encrusted lads (yes, I could short the pike stands to three or four models, but where's the fun in that?)...

And, no, there is nothing to suggest they were any prettier than the rest of the Jacobite army in 1690 or had ribbons on their shoulders, so if you decide to take inspiration from this and the fashion police kick in your door, don't tell them the chap from Quindia Studios said this was right. I just decided the uniform was fitting of a guard unit and as I mentioned above I wanted to paint something different.

Actually, Clibinarium has done a wonderful job with the details and the lace bits are well defined so it isn't as painful to paint as I am on about. Remembering this is a Jacobite unit I may also mix in a few lowly plain coats from the standard range as well for a less uniform appearance. They should look really impressive en masse!