I obviously bought this for my 28mm projects about the time I was making merchant ships and pinnaces however it was long overlooked in a box, buried under other non started projects. During a recent wargaming colonic irrigation I cleared out much accumulated clutter. Purchases which never got off the stocks or even out of the bubble wrap.

I came across this. I remember buying it at Claymore two or three years ago but for the life of me I can't remember the name of the trader. Long stand, lots of 28mm resin ships, big Napoleonic frigates and the like. English company. I bought some guns, figureheads, crews and this. Anyone know what they are called? I have tried searching images etc 28mm resin ships, pirate ships, wargaming ships, age of sail..... they don't appear. 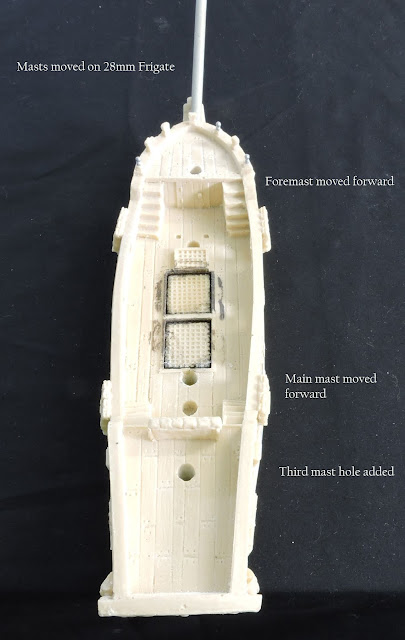 It was clearly meant for the Williamite campaigns in Ireland but recent diversions to the Medway in 1667 gave me an idea.... 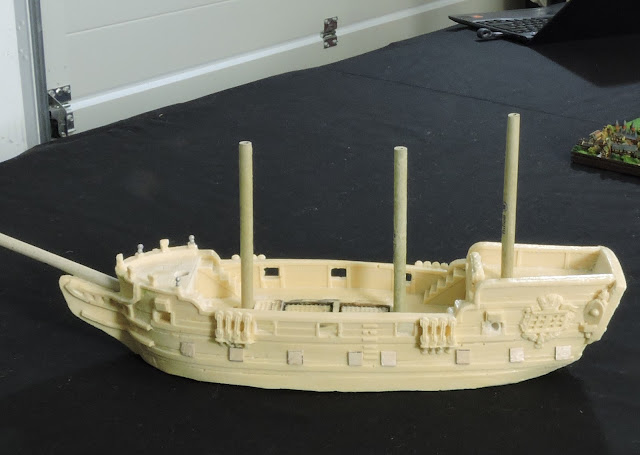 What kind of ship is it? Not sure. Possibly meant to be a frigate, pirate ship or 5th/6th rate. It had possibilities but needed a lot of work. Gwen was away abroad on hols, I had a Sunday to myself... right! Where's the drill, sandpaper, tools? Let's get working on this. 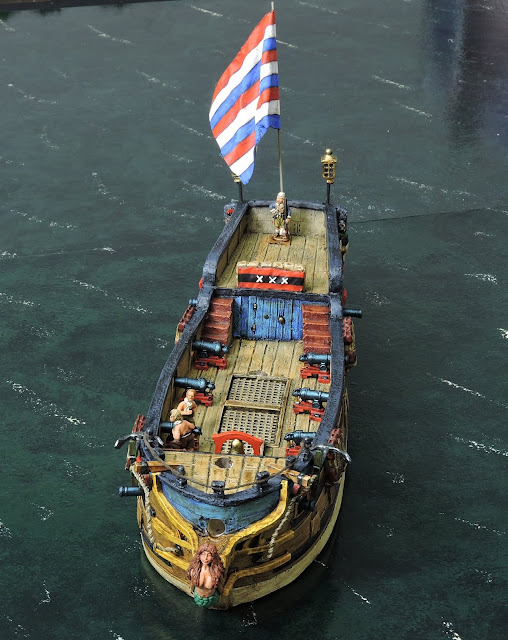 The resin casting is a bit crude so, I spent abouot 90 minutes filing lumps of clag from the bow and stern, filling holes with milliput but I could see the possibilities. I had a Dutch 4th or 5th rate in mind. Not enough guns ports. I can fix that - I added a row of closed ports with balsa. 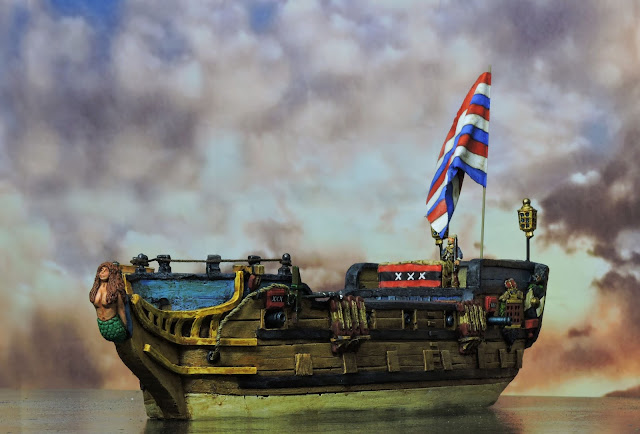 Are the masts in the wrong positions? I wanted three masts and so decided to move the mast hole positions with the help of messrs Black and Decker and make a third hole. 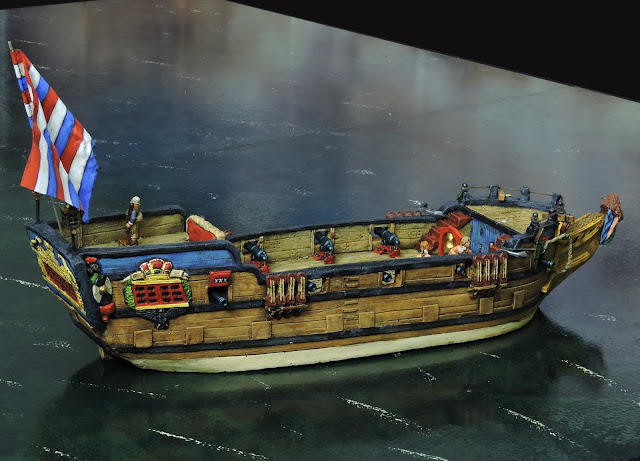 ;
The rails at the front were badly cast and brittle. I killed three during the clean up so I needed to do something about that after the big restructure was finished. I had an idea.... Ottoman standard finials - their do the job! 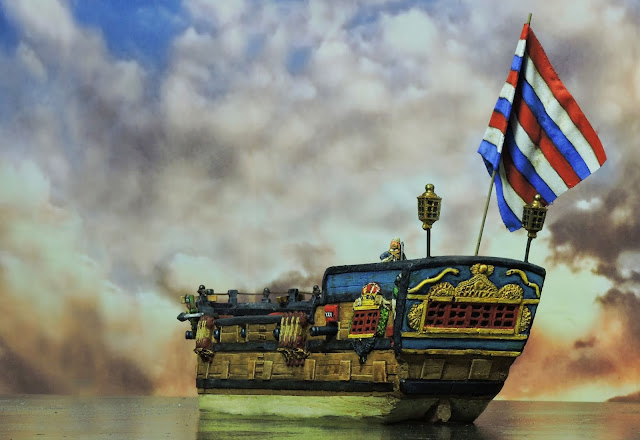 The stern was too low but I decided to leave that for now. If I every find out who made this I might buy another and do it again with a higher stern. 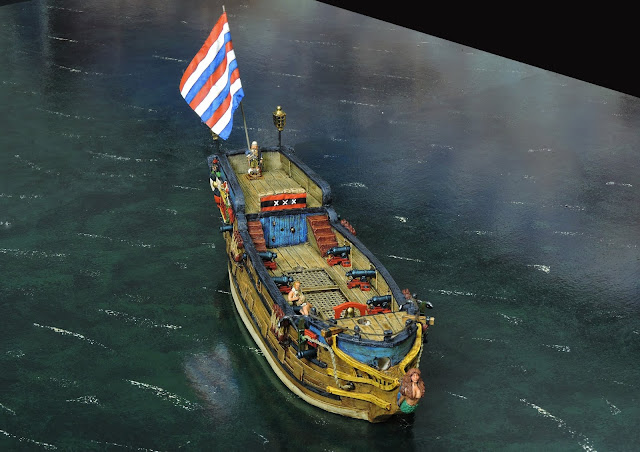 The paint job was quite fun. Having been painting 1/2400 for about 8 months getting my brush around this lump was a dawdle.When I finished painting the hull it was too bright so I washed it down in shader. 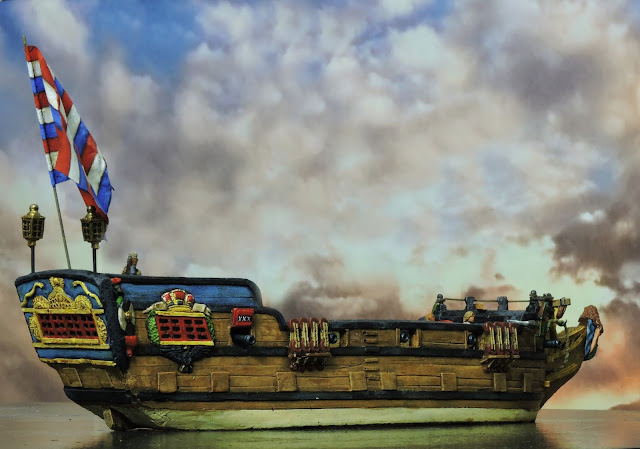 The mast will come next but I wanted to photograph it and share in case someone who sees it recognises who actually manufactured it.It will be part of my 28mm 1660 -1697 collection and is likely to feature in a couple of the scenarios from the book I am now working on for battles between 1670 and 1695. 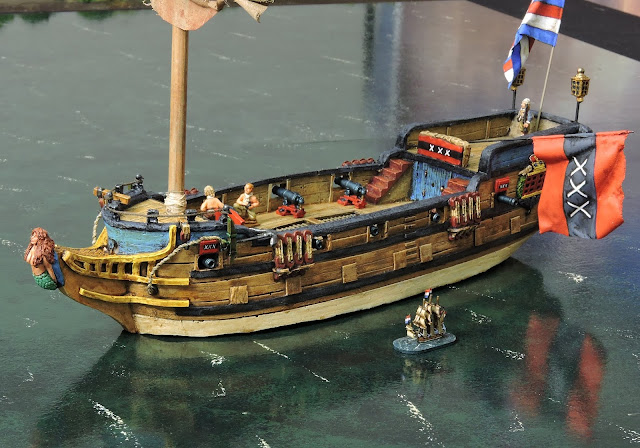 Oh, and I got to paint the biggest cotton flags I have ever done - the ship is clearly from the Admiralty of Amsterdam so, a mega Triple - Prins for the stern and the Amsterdam wapen for the mizzen (when I make it). I do enjoy a blingy flag!
Share Share on Facebook Tweet Tweet on Twitter Pin it Pin on Pinterest
Back to The League of Augsburg