I wanna tell you a story..Tales with toy soldiers HEIGHT

by Barry Hilton December 27, 2013
Barry Hilton - Sometimes when we painted something fine it is frustratingly lost amongst the welter of other figures placed in front of it. I long ago decided that height (within reason) could be a legitimate component of figure basing and have used some successful and admittedly not as successful attempts over the years.


The best way to approach it is not to make it up as you go along but to have a clear view in your head of what it will look like when finished before you begin. 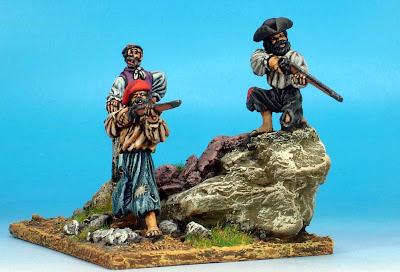 The piece above is rather dramatic and is part of a Pirate crew which one a couple of painting prizes way back in the late 1990s. The height works perfectly for the figure placed atop the rock which was actually gathered from a beach. 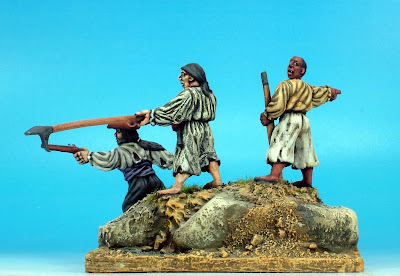 A busy group from the same unit as the previous piece. Scrambling amidst a rocky coastline to protect their hard won spoils.
Having judged painting and modelling competitions many times I have been frustrated to see good work miss the mark when some poorly thought through basing spoils an otherwise excellent piece of work. 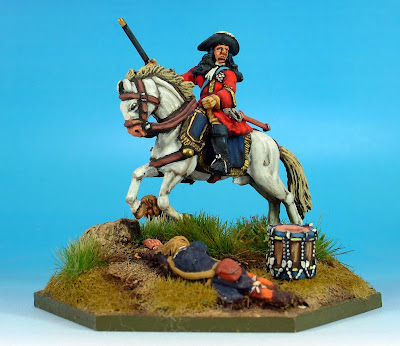 This iconic piece attempts to convey the King's triumph and majesty through height and his progress through the desolation of the battlefield wielding his baton of office and not a weapon. The prostrate nature of the fallen soldiers intensify the perception of height which in reality is less than  25mm or 1 inch from the base material. 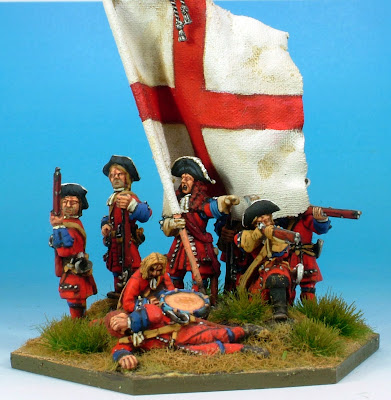 This piece is a personal favourite as so much is going on in it. From every angle, all details should lead the eye to the officer at the highest point. He is the centrepiece of the regiment and the top of the standard pole is more than 100mm from the table level. Layers of action move up from the prostrate guardsman in the lower left centre to the wounded drummer behind and the different heights of the soldiers clustered around the colours. This is the centre stand of James II's 1st battalion of Foot Guards. Perhaps it's the Boyne or Aughrim or maybe even Flanders. 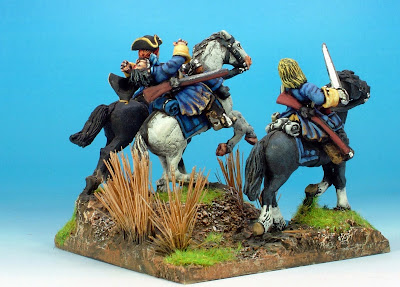 'Axel is hit!' Part of Ducker's Dragoon Regiment
This is a fairly extreme piece of work. Two of the riders are extensively converted and all of the horses are at different heights. As part of a unit containing six 60 x 60mm bases with similar ideas it is one of the most ambitious unit vignettes I have attempted in﻿ the Horse & Musket period. 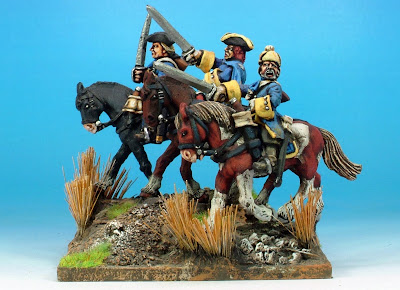 These Swedish fellows are also converted and at varying heights. They are also part of Ducker's Dragoon Regiment. The bulk of the height was created by gluing layers of 20mm card of different shapes on top of each other.

Try and keep the height differentials in proportion if possible. Try not to put figures in unfeasible and in accessible high spots with no 'story line' to say how they actually got their in the first place. Occasionally figures appear to have been either parachuted or beamed down to locations which neither a mountain goat nor an eagle could have reached. 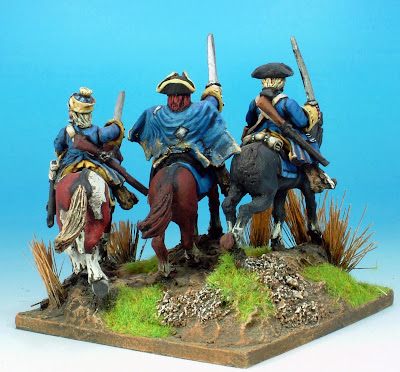 Excellent perspective of Ola, Sven and Lars﻿
Don't coat the base in tonnes of plaster or wet basing materials as this will simply make it too heavy and susceptible to warping. Build the height in successful layers with flat bits of card, lego bricks, coins, pieces of rock, cork bark or similar economic components which give height and bulk without necessarily adding huge amounts of weight. Milliput is good for anchoring, blending and filling. Plaster or filler can provide texture. Use wood glue watered down and heavily dusted over(when wet) with different grades of sand. All of these techniques will produce interesting ground work. A most dramatic example; King Karl XII leaps into the void bowling over a Russian sergeant as he does so. The King is converted from metal parts from 3 models. The horse has been adjusted somewhat. The trench is scratch built. There is a dragoon protecting the king on his right side.
Share Share on Facebook Tweet Tweet on Twitter Pin it Pin on Pinterest
Back to The League of Augsburg