In the Shadows of History: Battle of Newtown, 31st July 1689: Part Eight

by Barry Hilton September 04, 2013
Beneath the Lily Banners Special Rules Recommendations
BLB has several additional rules which can be used to give this action some further depth and flavour. I recommend the following are used:
Capturing colours and standards p26
Melee modifiers for Jacobite Horse p32
Melee modifiers for Jacobite/Williamite foot p32 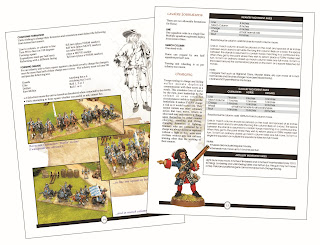 If you do not have BLB I suggest that you make the Jacobite Horse superior in melee combat to the Williamites. I also recommend that you give an extra ‘religious antipathy’ melee bonus when the foot of each side charge into combat.

Modifying the Scenario for Other Periods.
This scenario could easily transpose into other periods with little or no adjustments. I suggest the following would be easy to do
Results
There is enough variation in the scenario options to fight four different games. The sides although not equal are close enough to give each force a chance of winning without being sterile and even on the points or army list principle. I have enjoyed the challenge of this game on several occasions and am certain some of you will too.

References
Books
‘A Jacobite narrative of the war in ’ (a project from the history department of , )
‘The popular history of ’ (Charles Knight, 1859),
‘The of the ’ Campaign title 160 (Michael McNally) Osprey Publishing
‘William III at war in & ’ (Alan Sapherson) Raider Books
‘The Succession of Colonels of the British Army from 1660 to the present day’ (NB Leslie, Society for Army Historical Research, Special publication No11, 1974)
‘The Boyne & Aughrim, The War of the two Kings’(John Kinross), The Windrush Press
‘Irish Battles A military History of Ireland’ G.A.Hayes-McCoy (Appletree Press)
‘1644’  ECW Rules (Rick Priestley) Wargames Foundry
‘Beneath the Lily Banners’ Fast play wargames 1660-1720 (Barry Hilton 2008) WordTwister Publishing
Beneath the Lily Banners 2nd edition 1660-1720 (Barry Hilton 2011)
And of course the Battle of Newtownbutler book found on the reading list post!
Share Share on Facebook Tweet Tweet on Twitter Pin it Pin on Pinterest
Back to The League of Augsburg