In the Shadows of History: Battle of Newtown, 31st July 1689. Part Five

by Barry Hilton August 14, 2013
The Williamite Force
Even less is known about the Williamite troops as Newtown if the majority of sources are considered. It is likely that they were mostly Enniskillen men as the town was a centre of Protestant resistance or at least that they were local to the area. It is unlikely that they were uniformed as the regiments were recently raised as part of armed resistance and the area was subject to Jacobite focus and troop movements. A mention later in Sapherson’s book of Inniskilling men being extremely reluctant to swap their red coats taken from the Jacobites for new grey ones from suggests a policy of acquisition through combat as opposed to supply and provisioning from the authorities or government. These garments were captured early in the war and the quantity was sufficient to clothe two companies who served in Zachariah Tiffin’s Regiment. It is extremely probable that they were in fact captured during the action at Newtown. ’s date of appointment as colonel of the regiment is , roughly one month before the battle. His regiment was raised in Enniskillen and made up of local men who later fought at the and in 1695. They marched into history as the 27th of Foot ‘The Inniskillings’. Other web histories stated that in 1689 the town raised foot and dragoons but no mention is made of Horse. I have crossed referenced several sources but could find no further detail. If ’s regiment conformed to the norm they would have accounted for 920 men or roughly one third of Wolseley’s force.

Dragoons are mentioned and in the clash at Lisnaskea mounted men under chased off ’s dragoons or horse. There is also mention in at least one source of the Protestants using their cavalry to cross the causeway after the Jacobite guns had been cleared by the infantry moving through the bog.  It is possible but not likely that a smaller force of dragoons or horse may have been able to chase away nearly 1,000 Jacobite dragoons as Lisnaskea. Again here I am using logic and probability to deduce as opposed to fact and I would concede that stranger things have happened but it is more likely that the forces were evenly matched. If the Protestant units were raised in line with regulation then two regiments may have met ’s thirteen troops. I have decided to make these one each of horse and dragoons each having 6 troops or two squadrons. This leaves us with roughly 1,000 unaccounted for troops. The easiest solution is to provide Wolseley with another large regiment of foot. 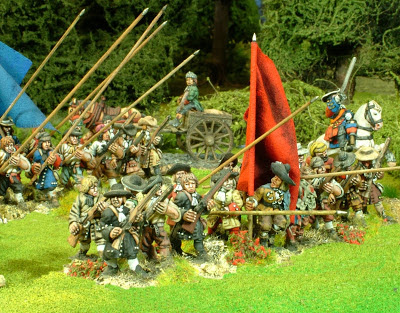 Again I have left the data from the re enactors website till last. They state that the following Williamite units were at Newtown; Wolseley’s Horse, Wynne’s Dragoons, Gustavus Hamilton’s, Zachariah Tiffin’s & Colonel Lloyd’s regiments of Foot. This actually tallies a lot closer with what I have discovered by crossing referring other sources. The men are all stated to be Enniskilleners and at typical strengths for the war in the totals would be around 900 of Horse and dragoons and 2,100-2,200 foot making the 3,000 estimates stated elsewhere believable.  My recommendation is that gamers go with this orbat which allows for typically sized regiments and not with the less numerous larger sized regimental theory of the previous paragraph. 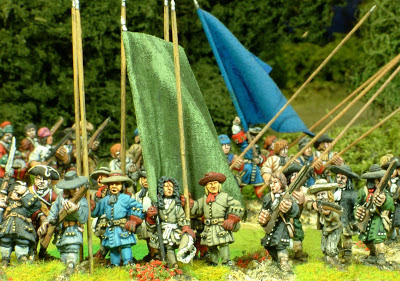 The troops ratings for both sides are arbitrary but reflect the fact that the conflict had not long started, most of the Protestant regiments were less than one month old and that the efforts of both sides had exhibited amateurism both at leadership and company level. The Jacobite Horse are widely accepted to have been disciplined, brave and formidable in relative terms. I have listed the Beneath the Lily Banners morale classes and suggest that if BLB is used to play the game at regimental level, players make sure each foot regiment has a central stand of pikemen and is only allowed to fire muskets with two stands of figures.