In the Shadows of History: Battle of Newtown, 31st July 1689. Part Four

by Barry Hilton August 07, 2013
Note on Unit Strengths, Composition and Orders of Battle.
The Orders of Battle are somewhat conjectural and are my own work. I have been able to discover only one source of names for the regiments present at the battle which although useful, threw up several anomalies which make its provenance somewhat questionable.  When in doubt, I chose to base units on typical compositions of forces in the field during the conflict. For the company level scenario I have cut the Protestant foot regiments down to 10 companies each to keep the ratio of troops proportional to the Jacobite units. An alternative was to reduce the number of figures per company which is easy to do if your collection is singly based or you re-fight the battle using 1644. If you have a multi based collection like my own and are using a rule system which shoots by  ‘firing groups’ like Beneath the Lily Banners, then to keep the firing groups (of 6 in this case) intact it is easier to remove a number of entire groups to keep the ratios right and the rule mechanisms working. A final alternative would be to deploy all of the companies but treat each base of figures as representing 4 or 5 figures to begin with regardless of how many actual figures are on the stand. This way attrition will remove firing groups at a quicker rate. 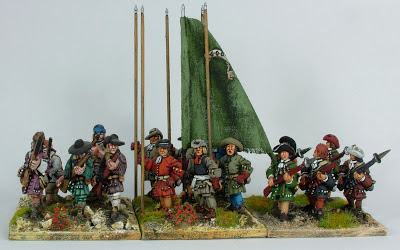 Civilian clothes were likely to predominate in both armies although the Jacobites were reckoned to have at least some red coated men. Distinguishing friend from foe may have been down to the simple field signs of a green sprig for Williamites and a scrap of white paper or cloth for Jacobites. This unit is drawn from Dixon Miniatures Sedgemoor range. In both shots of this post I have perhaps been too generous by providing the soldiers with bayonets!
Share Share on Facebook Tweet Tweet on Twitter Pin it Pin on Pinterest
Back to The League of Augsburg