In the Shadows of History: Battle of Newtown, 31st July 1689. Part One

by Barry Hilton July 17, 2013
Barry Hilton - This scenario is based around a little known incident which in historical terms has been understandably eclipsed by the concurrent relief of the siege of . In wargaming terms it lurks deep in the shadows beyond the battles at The Boyne and Aughrim.
It is particularly interesting because of its size and the nature of the encounter which could be described as a running battle. I have chosen to compile a brief historical background to place the scenario in context. My sources for this were A Jacobite Narrative of the War in (a project from the history department of , ), The Popular History of (Charles Knight, 1859), the recent Osprey title The Battle of the , Alan Sapherson’s William III at War in & and a variety of military and historical websites.
Although broadly in agreement these sources do conflict markedly on detail not only in the sequence of events on the day but in the number and composition of the troops involved. Rather than see this as a problem I have looked on it as an opportunity for flexibility in terms of the Orders of Battle I offer for the scenarios. I was working to a very tight deadline to finish this article and had originally intended to bang it out in short order as a brief two page wargaming guideline but the research element drew me deeper and deeper into the subject and proved to be a very rewarding exercise in itself.
As at the time of writing I have been unable to find any single body of text which draws together the various elements contained herein or which attempts to analyse from a military perspective, some of the anomalies in unit organisation. To that end, the article may be able to claim some original thought and research which adds to a deeper understanding of the battle. 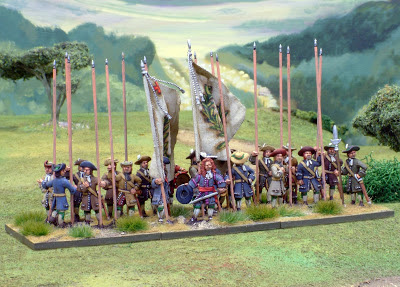