Inspired by Gunter and PC games

I have grown fond of the Saxons but have not yet seriously started painting any. Gunter Heim's mammoth Saxon Army of the GNW used almost exclusively Warfare Miniatures and I have had the pleasure of seeing them in action three times.


Reading about the Saxons and playing the Pike & Shot Campaign game as the Saxons at Fraustadt, Klissow and Gemeaurthof has intrigue me even more. The game is of course limited in its AI ability and does not think like a human simply reacting to the player moves. Difficulty of scenario is created by downgrading player morale and upgrading AI morale. Nevertheless the games have been fun and the Saxons prove quite tough and frequently win.

I have been meaning to start some Saxons but lack of time has prevented it which has been frustrating.

I have managed to get started with this test base of cuirassiers. Since all Saxon cavalry with the exception of the dragoon regiments were cuirassiers any collector is spoiled for choice.


This German language book from the Army and Weapons series is pricey but has some really interesting illustrations. It shows the Saxon army in an extremely wide variety of dress styles substantiating the use of almost any 1680-1720 period wargames figures legitimately.

Gunter chose to put all of his troops in the informal shaped hat. which looks fantastic. I have learned from his experience and am going to mix the dress of my Saxons.

The choice of facing colours in the Saxon army is extremely wide and the flags, specifically commissioned from Quindia Studios by Gunter are truly spectacular and prismatic in shade.

Watch out for more Saxons coming your way from me. 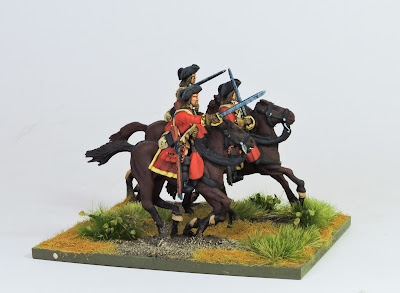