by Barry Hilton March 17, 2016
Patrick Sarsfield was active in the Jacobite -Williamite conflict from the earliest days. He it was who led Irish soldiers loyal to King James during the Battle of Reading in Dec 1688, the only substantive action of the Glorious Revolution. 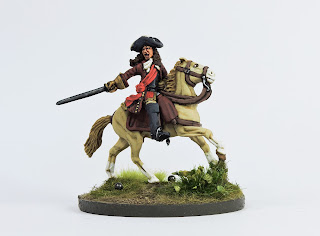 Sarsfield spent most of 1689 in north west Ireland fighting against forces from Enniskillen and Sligo. He died in battle during Luxembourg's great victory of 1693 at Neerwinden/Landen. He lived an adventurous and action packed life and left it at the age of 33. He was a brave soldier, loyal to his King and true Irish hero.

I have used the heroic Sarsfield sculpt from WLOA21 but mounted him on a standard cavalry horse. The base carries a reference to his greatest triumph when he intercepted and destroyed William's siege guns bound for Limerick in 1690. The cannon balls recall this act.