Jim Purky needs no introduction in the world of Horse and Musket wargaming so I won't try here, if you don't know about Old Fritz then search out his German 'alte' ego and see what he has been up to for a long time.

Jim has become very engaged with Warfare Miniatures Great Northern War project and recently sent me some fine pictures of his newly completed unit of the celebrated Upplands Regiment.

Jim definitely beat me to the punch as I have long planned to paint larger units for my GNW collection but have simply been checkmated by the clock. I was thus delighted to see what he had done with the newly released Swedes.

He chose the tricorned attacking poses to create a fine animated unit capturing all the dash and aggression of Karl XII's blue killing machine. 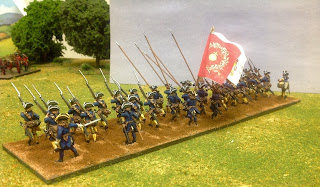 His use of file closers to create the impression of a third rank is a neat little trick on the eye.  As a teaser I have included a final shot of four painted Russians completed just before I headed out to Oman (back soon to continue building the walls of a north western Irish town). 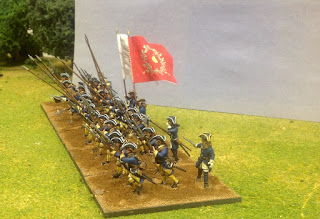