The astonishing result of was a Whig victory during which they captured the entire Royal Navy squadron sent to destroy them including the 46 gun Kingfisher, 40 gun Falcon, 24 gun Mermaid and the yachts Charlotte and Arran. 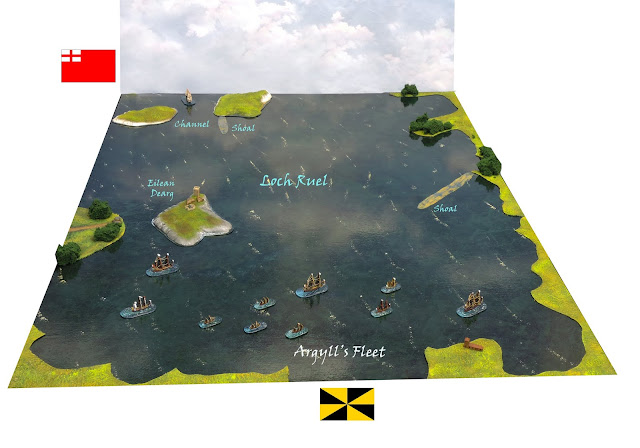 Such spectacular success offered Argyll an opportunity to take his expanding fleet to sea and meet the Royal Navy in open water in the Firth of Clyde. This supposedly climactic third scenario produced another astonishing victory as the Royal Navy's captured and renamed ships were turned against it. This time, Argyll captured the 46 gun Ruby and 46 gun Diamond although the former was retaken by John Ashby's 58 gun Montagu. 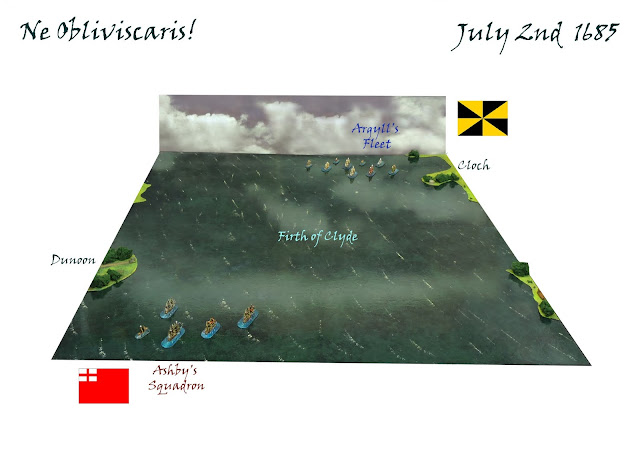 So, it was not over. We thought we'd give Argyll another chance or, alternatively, King James another throw of the dice to eradicate the traitor. No less a personage than Admiral Herbert was sent north with four ships to finish the matter.

In the battle off Mull of Kintyre, Argyll managed the incredible feat of capturing a 70 gun ship - Warspite, together with the 54 gun Deptford and 20 gun Hawk, leaving Herbert to beat a hasty retreat in his flagship Royal Katherine. Where do we go from here? All for the loss of not a single ship.

His previous prizes; Dunedin, Effinying Castle and Carrick - all merchantmen, have been sold together with the two ships he brought from Holland - Sophie and David. His original flagship the 24 gun Anna has been given to her Dutch captain and his crew as reward for their services and has sailed for the Maas.

His biggest problems are now - insufficient crews to man his fleet and a proper large dockyard from which to undertake vital repairs. Freelance shipwrights have been sent for from Holland. Affairs in the south are going ill for Monmouth and Argyll may be forced to aid his uneasy co-conspirator in the days to come.

The players have fulfilled their roles magnificently. Dave has had tremedous dice luck and Colin appalling dice luck but, Dave has also made some bold moves at the right time which won him great prizes. All actions have had equal points values and the smaller Whig ships have carried better crews simulating not superior seamanship but higher levels of motivation to win - if the lose they are for the gibbet! I will report on the next amazing adventure of the rapidly expanding Whig Fleet soon. 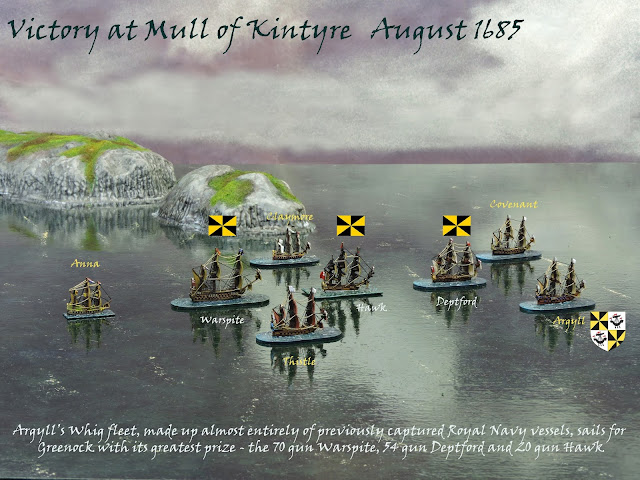