The Battle of Öland which occurred on June 1st1676 during the Skåne War was a major fleet engagement and a disastrous defeat for Sweden. In terms of drama on the high seas, it doesn’t get more intense than this. A large but generally poorly manned and maintained Swedish fleet was caught by a combined Dano-Dutch fleet off the northern tip of the island of Öland. 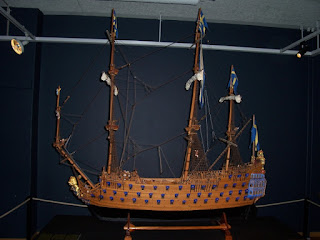 The Swedes were to leeward of the enemy van and as they turned inland in an uncoordinated fashion, their massive flagship the 120 gun Kronan, was caught by the wind and capsized. During this disaster, one of her magazines appears to have ignited and blown her apart in front of the entire assembly of ships. Aboard was the most senior naval officer in the fleet – Admiral Creutz. 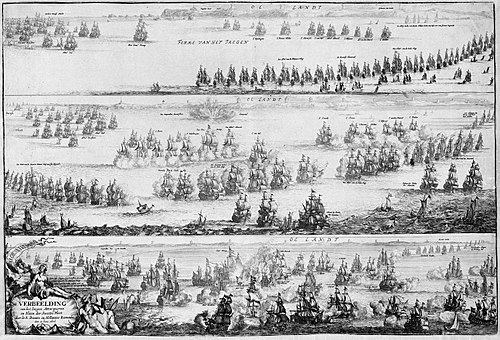 He was lost in the blast together with a crew of 850. The second in command, Admiral Uggla turned his ship the 94 gun Svärdet, around but almost collided with the wreck and avoidance manoeuvres further confused the fleet which interpreted this erratic movement as a retreat. Some of Creutz’s ships had already panicked and fled. 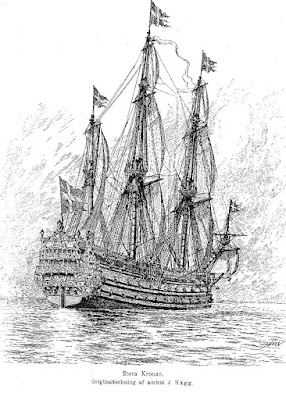 As the enemy ships clustered into the battle zone Svärdet together with three or four other Swedish ships were mobbed, surrounded and battered. Uggla’s flagship surrendered but after the act was accidentally attacked by an enemy fireship and burned. This admiral was also lost. The Dano-Dutch under Tromp and Juel chased and caught more Swedish ships resulting in a spectacular defeat. 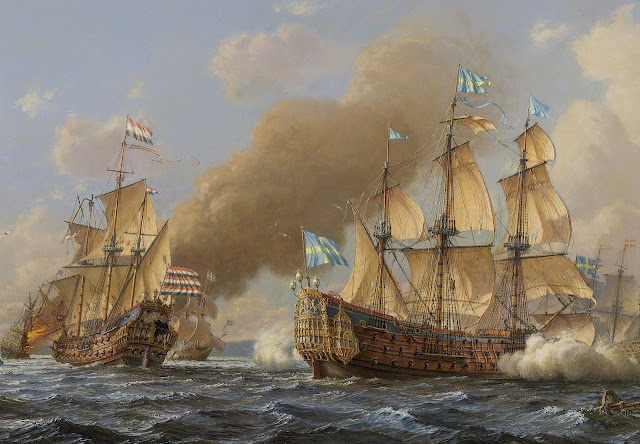 Lost in all this mayhem is the existence of a massive warship – Kronan. Her loss has to my mind diverted attention from what she was – a truly extraordinary vessel. I am building some 4Play naval scenarios for the Skåne War and Great Northern War. I wanted to create a centrepiece for the Öland packs and decided to model two versions of Kronan.

The first is the ship rolling on her side. I agree this is a lot of work for a passive ornament however, when the mood takes you, you have to follow the creative instinct. The second version, already underway, is the ship as normal. It may have a chance to fight in some What if situations.

I have used the Ark Royal Miniatures ship Royal Sovereign which was of compatible size. I carefully filed her hull at a angle and used milliput to model her below the waterline shape. The paint job is pretty standard as is the rigging. Assembling and rigging her at an angle on the base has been an interesting activity but as you can see from these WiP shots, the whole thing is coming together. The base is wider than usual to accommodate the angle she is lying at and protect the masts and rigging.

Still lots to do but this will create a fantastic centrepiece for some of the scenarios. I have tried as far as is possible to create the impression of a high wind blowing from her larboard side and pushing her over. You can see this as it tears at her stern ensign and some of the running rigging bowing out from the starboard side.