I  took an inevitable diversion into the world of piracy by painting a 4th rate up and flagging it as a late 17th century privateer of indeterminate nationality.


Having further developed the points system for my rule set I thought it would be interesting to run out several new pieces all at once - the privateer, the points system, the new gaming charcters and a little Caribbean port I have been working on.

The scenario pits the 48-gun privateer Sea Wolf against an English squadron based out of a Caribbean island harbour used to protect English shipping in the new territories being exploited by the Stuarts.

Sea Wolf has a Veteran crew, 12 strength points and the following additional features:

A master gunner  who adds +1 to gunnery throws.
A master mariner who aids a wide variety of sailing skill checks by adding +1 to skill check throws.
A flag officer/hero - Captain Lupus  who aids combat and morale check throws.
A 'spiritual character' of non-specific denomination assisting combat/morale modifiers.
A privateer crew which has superior performance in boarding actions.
Heavy guns which have increase chance of causing damage.

All of the above carry a points cost except the heavy guns the additional hitting power of which is counter balanced by the narrower turning arc and longer reload time. Total points: 336


Against this lone ship the English squadron deploys:

Total points for the English squadron: 345

The objective of the game was for the privateer to tempt the English squadron out of its anchorage and destroy it piecemeal so that the privateers could occupy and pillage the harbour. The English ships sailed out on turns 1, 2 and 3 in the order written above.

The game was set up to determine if  single ' pimped up' ship could take on and defeat three others of equivalent cumulative points value.
It lasted for about 40 minutes and was very informative and fun too.

In Turn 1, with the wind coming from the right in the shot above, the English frigate does her best to close haul out of the harbour and into open water. Sea Wolf opened up immediately. 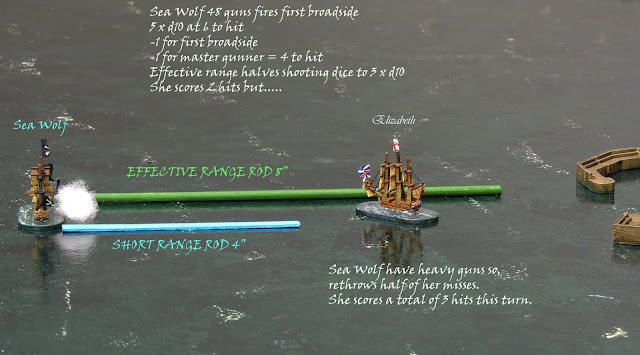 The picture above explains almost everything. The measuring sticks are much more useful that a dangerous metal roller tape which could wipe ships out at a stroke. Sea Wolf is shooting at a range of about 6 inches which halves her shooting dice. She is Veteran and using d10. 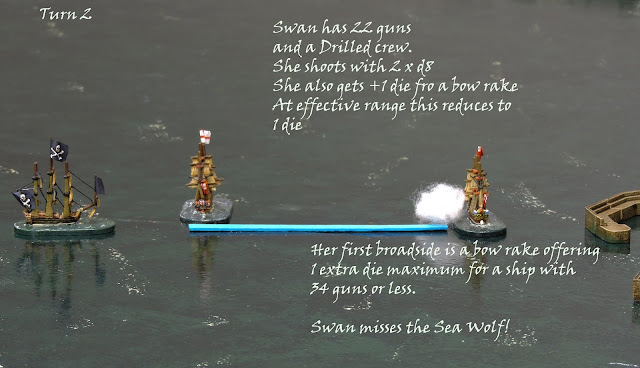 In Turn 2 the smaller Swan reached open water but her opening and important first broadside was ineffective. Sea Wolf is looming down on Elizabeth. 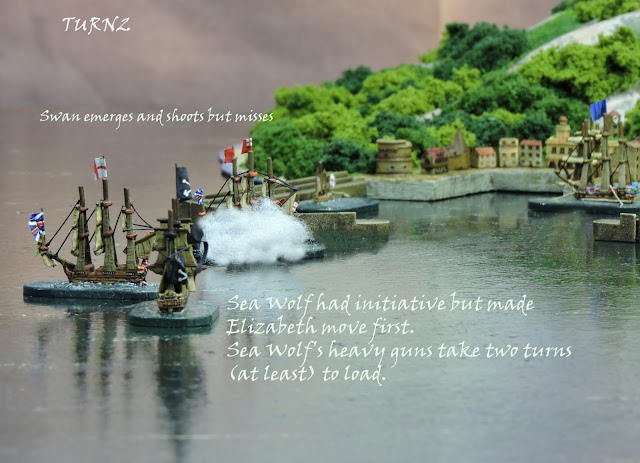 Using initiative, Sea Wolf tries to grapple Elizabeth but with an 80% chance of success, her crew bungle it! This boarding action would have been interesting as both had 'soldiers' and characters aboard. 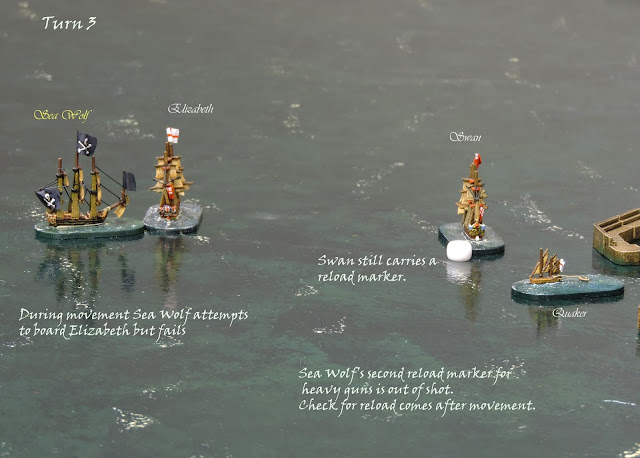 Picture above shows the turn sequence interrupted for the failed grapple attempt by Sea Wolf. Other activations took place after this. 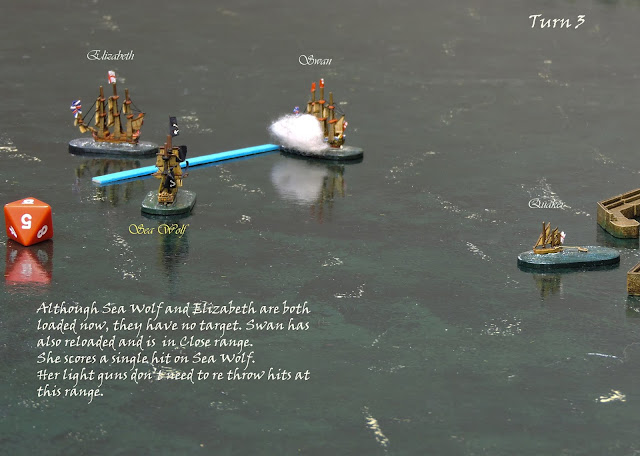 Swan quickly reloaded and catching the wind to broad reach, picked up speed and fired again this time, hitting Sea Wolf - that just made the privateers angry! The little Quaker broke out from the harbour to hopefully make a contribution. 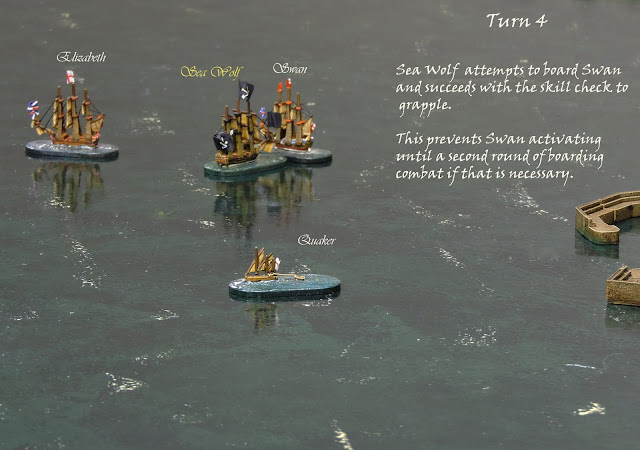 In Turn 4 Sea Wolf eschewed the opportunity to use her cannon and moved straight in for the kill against Swan. The boarding attempt was this time successful and a rather one sided combat began.

The shot above shows the positions at the end of Turn 4 with two vessels locked in a boarding action. 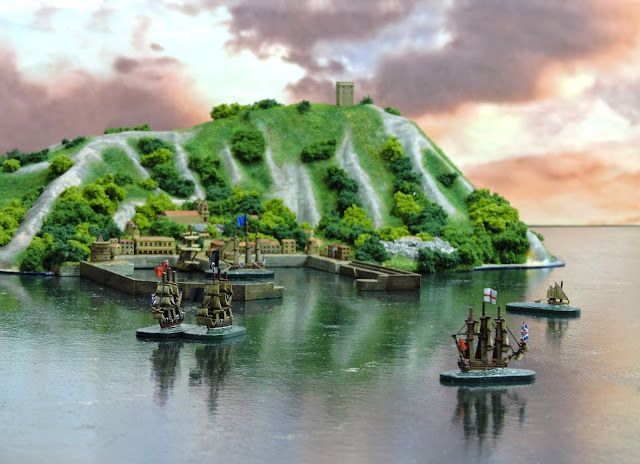 Despite gaining modifiers for having loaded guns in the boarding action, Swan was overwhelmed in a massively one sided combat. Sea Wolf gained +5 net modifiers added to the score of 2 x d10 whilst Swan replied with the sum of 2 x d8. The English ship struck her colours. With a glut of characters which provided bonuses came the inevitable character loss checks. Amazingly all were safe except the religious leader who was felled in combat and mortally wounded. Notwithstanding, the privateers took little heed and ploughed on.


On Turn 5 Sea Wolf pulled away having left a prize crew aboard Swan. The other English vessels got themselves in a bit of a tangle which was to have unfortunate results. The reloaded Sea Wolf held her own in the exchange with both enemy vessels.


Unavoidably the compulsory forward movement compelled the English ships to collide although the damage could have been worse. This effectively mucked up the turn for the English whilst Sea Wolf manouevred menacingly to leeward.

On Turn 7 the seperated English ships collided yet again and this time the damage finished the small Quaker which was abandoned by her crew. The cumulative damage on Elizabeth compelled her to seek the sanctuary of the harbour. 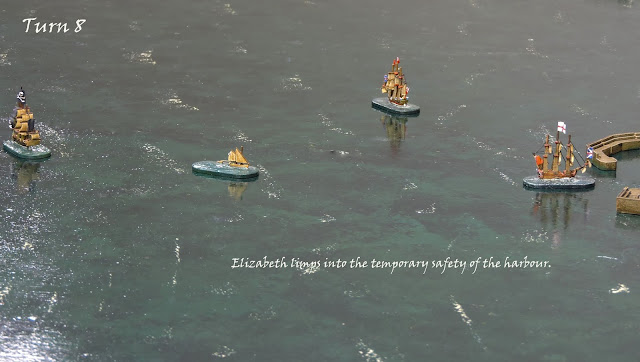 Turn 8 and Elizabeth has just reached the harbour mouth. is she safe? 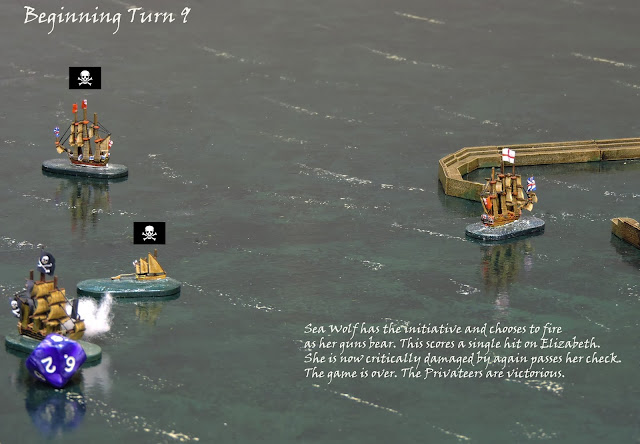 Having gained the initiative yet again Sea Wolf moves first and fires as her guns bear. Even at extreme range she is able to score one final hit on Elizabeth which had now moved into the Critical damage category. The doughty Wolperstone is however, able to keep morale high and Elizabeth passes her compulsory check. 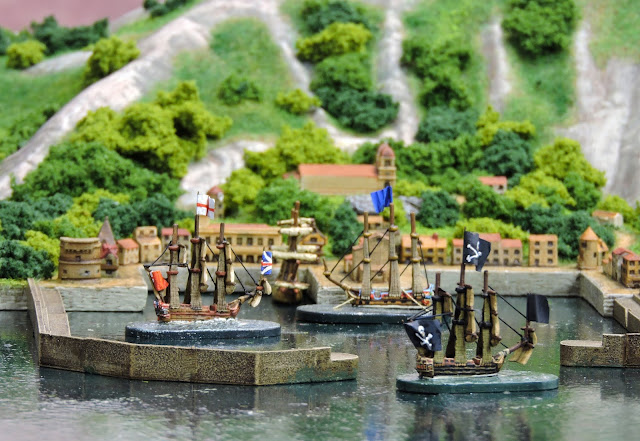 Bottled up in a harbour which is just about to be assaulted by a thirsty and excitable privateer crew, Sir Bertram may wish to seek terms to protect both property and lives. The English squadron lost 308 points and the privateers 168 with of course their spiritual guide being slain in the boarding action.