The naval dimension to the Skåne War is both exciting and less well known that the land campaigns. Many know of battles like Halmstad, Landskrona and Lund. Often the Swedes are seen as the the sharper, ascendant military power and the Danes as somewhat bumbling and plodding. Whether right or wrong, at sea the picture was reversed.

The Swedes were consistently defeated in several large battles and their powerful if rather neglected fleet left in tatters. The Danish Navy in concert with their highly competent Dutch allies, kept a clean sheet and outfought their sworn enemies at Bornholm and Öland in 1676 and at Møn in 1677. The Danish victory at Køge Bay in the same year is widely regarded as the greatest naval triumph of the country’s history.

The Swedish fleet contained some massive warships including the astonishing Kronan or Stora Kronan of 124 gun which suffered exactly the same fate as the Vasa. It capsized, blew up and sunk during the Battle of Öland.

This conflict also involved the almost unknown Brandenburg-Prussian fleet in operations against Swedish ships in the Baltic. This is a wonderful and contained force easily modelled and completed without too much purchasing or painting. English and French participation can be factored in at a distance making the entire conflict great fodder for Mad for War. 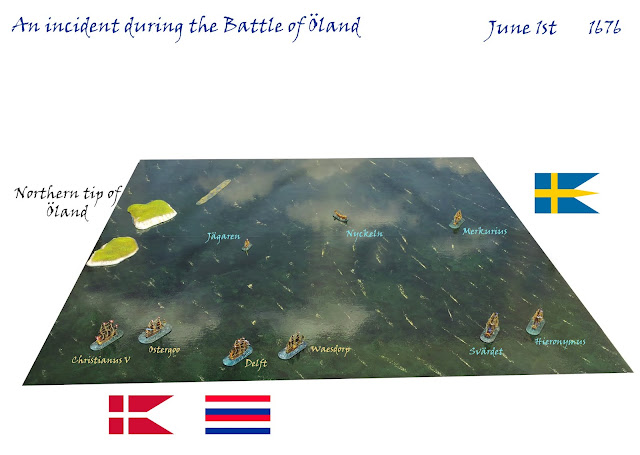 We recently completed a little vignette game, extracting events from the Battle of Öland. I played the Swedes, Dave and Colin the Dano-Dutch. The Swedes are in retreat and passing the northern tip of Öland Island. In hot pursuit are four battle scarred enemy ships. The prize is the immobile flagship of Admiral Johan Bär - the 84 gun Nyckeln which has had all of its masts shot away and is drifting dangerously close to shoals on Öland.

Having already lost their Admiral of the Fleet Creutz and his flagship Kronan, Admiral Claes Uggla does not want to bear the responsibility for the loss of yet another capital ship and admiral so, orders his own flagship the 94 Svärdet together with the Merkurius (62) and Hieronymus (64) to turn around and save the crippled vessel. The pursuing Danes and Dutch must sink, capture or otherwise destroy Nyckeln. Severa little twists were introduced. All ships checked for battle damage prior to entering the scenario. This represented the fighting which had taken place before the scenario began.

The Swedish ships were all to carry double-reload markers because at the battle, many Swedish ships were undermanned. This variable was not known to the enemy.  The 'drift' and direction of orientation of the crippled Nyckeln was dice-modified. This meant her general trajectory could be guessed but currents and wind would introduce an element of unpredictability for both sides. Tromp was given a +1 for Command Initiative. Both forces were roughly equal in points - Swedes 1,058 (with the triple handicaps of double-reload, lower initiative and one immobile large asset) and the Dano-Dutch 1,034. To win the Swedes needed only to lose no ships.

Dave was Tromp commanding the 80 gun Christianus V and 60 gun Ostergoo. Colin was van Almonde commanding the 62 gun Delft and the 66 gun Waesdorp. In addition to the ships already mentioned, the Swedes had the innocuous looking Jägaren which the enemy immediately spotted as a burner!
The game began with three groups of two ships all sailing on parallel courses NW with the wind blowing WSW and conditions choppy. The Swedes bit the bullet and began the tricky manoeuvre of turning into the wind which was reasonably well handled. Merkurius was in the best position to make a pass on the enemy whilst Uggla's ships found it difficult to make speed and get ahead of the enemy vessels most of which were closer to the crippled Nyckeln.
Jägaren fired on T3 and headed straight for van Almonde's ships which took evasive action, narrowly avoiding collision with each other. Delft got clear but Jägaren hit Waesdorp which caught fire. The Dutch crew managed to cut her adrift and get the fire under control before it took hold. Hieronymus and Merkurius were handled well and both opened the account creditably as the four enemy ships closed on the target. The Swedes used their 60s to buzz the enemy, obstruct them and generally sheperd them away from the drifting Nyckeln. The larger units of both sides took and inordinate amount of time to get themselves into position, particualrly Svärdet.

At one point' all three Dutch ships swarmed around Nyckeln  tearing lumps out of her hull with the Swede being unable to bring any of her 84 guns to bear during the entire battle. Despite the intense bombardment and obvious deterioration in seaworthiness, Tromp's ships were unable to land the killer blow and the hulk continued to drift past them.


Coming about meant having to pass through the covering screen once more. In the tangle of voracious pursuers swarming around her at close quarters collisions were inevitable. Tromp's captains did well not to hit each other on several occassions but the admiral's flagship did crunch into the stern of the enemy ship Hieronymus badly damaging her.

In a moment of gallant sacrifice and to distract attention away from Nyckeln, Merkurius, badly damaged and almost out of action, boarded Ostergoo thus sacrificing herself to save Nyckeln. Waesdorp had come about and boarded the crippled Hieronymus just as Svärdet finally brought her guns to bear. Initial shots at Waesdorp did little harm but a broadside on van Almonde's Delft damaged her so badly that she was forced to withdraw from the battle. By this time both the Swedish frigates had been overcome in their weakened state. Nyckeln had drifted out of reach of Tromp's slow and lumbering Christianus V which was already battle damaged and suffereing from the earlier collision.

Uggla's Svärdet broke off and headed for Stockholm. The Swedes had lost two ships but Nyckeln was saved thus the encounter was declared an honourable draw.


Our views on the advantages and many disadvantages of using very heavy and slow units as opposed to the more manoeuvrable 50-70s made for interesting post match discussion. The biggies are so difficult to use effectively but as demonstrated by the single broadside on Delft, a good shot is enough to put even a significant ship of the line out of action.
Share Share on Facebook Tweet Tweet on Twitter Pin it Pin on Pinterest
Back to The League of Augsburg