When I started the project I knew where I wanted it to go but it seemed somewhat of a tall order. Several months down the track and I believe the most difficult bits are behind me. Most of the ships are done. The dockyard board which is the most involved, is done bar the shouting - one minor road change plus the appearance of a wood and varnishing the river.


I have pondered over where to go next - the very attracive and challenging upriver stretch to Rochester Bridge including the castle and cathedral or, the practical big-bend downriver from Upnor Castle to Cockham. The former although spectacular to look at was never reached by the Dutch - I think if they'd got to Rochester, England may have become a republic again in 1668!
The down river section is where the magic happened.  Running the gauntlet past the castle and burning the battleships.

Upnor it is! Having planned the board in my mind and on paper for months, it was time to get carving the balsa! The first shot below shows where the board sits and this is the basic form. Since this shot two days ago, much detail has been added.  This stretch of the river saw the entire Dutch squadron assembled for the big push toward Chatham. This is also the stretch just north of where the Royal Charles was captured. The Sancta Maria foundered here and burned on the bank near the bend. Upnor Castle (already scratch built since this shot) is the furthest upriver point.

Call it serendipity, fate, synchoronicity or another one of the icities but... I got to fly at about 10,000 feet over the Medway in good weather with a window seat in September 2019. It really made my year. I will share more of the very informative shots in another post but the picture underneath shows the project in real life and how wonderful that was for someone building a model representationto experience.


I have endlessly pored over pictures, Google Maps, OS maps, sketches like that below, Admiralty maps, books and archaelogical society papers to build as complete a picture as possible about where everything was between June 9 and 14, 1667.


The Evelyn sketch shows the position of many of the Navy's ships in order, right up to Rochester Bridge. The representation of De Ruyter's main fleet in the Thames Estuary is astonishing. Imagine the modern Russian Navy sailing into San Diego or the James River and anchoring there for a couple of weeks whilst it systematically tried to eliminate the US Navy bit by bit. Of course that may be a poor analogy but conveys the outrage, panic, indignation, disbelief, impotent fury, shame and desperation of the population at large in south east England during the campaign.


I am enjoying every minute of this project and the more I look at the 2mm Brigade Models buildings the more convinced I am that they are better for 1/2400 scale.

There is no commercially available model in a suitable scale for the curiously shaped Elizabethan Fort at Upnor. I had to get my best creative head to produce something which might be perceived as a passable impression of Upnor in the eyes of an observer.  My version has a large ground area in scale terms and without completely scratchbuilding I had improvise with available scraps. I wanted it to be a feature and of course, artistic licence is part of the modelling process. 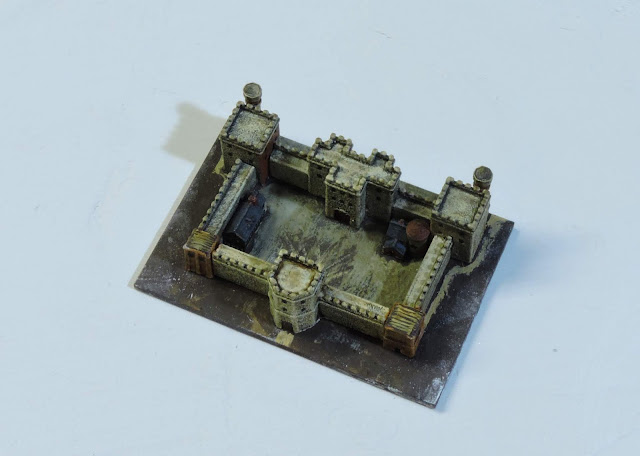 I used raw components from Brigade Models generic castles range. I also used mosque minaret towers with the tops lopped off, the bases of two industrial chimneys for the landward towers (which did not exist but I did not want to scratch-build wall right-angles and crenellations in 1mm scale!). The small brick towers do the job and in the red brick style of early Jacobean architecture.  Inside I put some free-standing buildings from their town and village ranges to create a bit of interest. 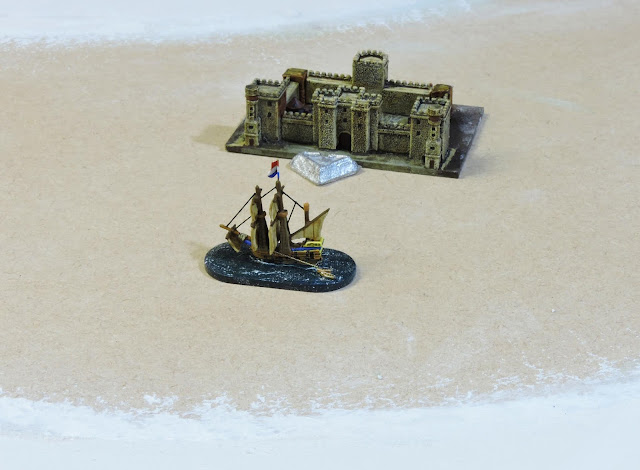 What do you think? Will this pass as Upnor Castle? The ship scales it quite well. The bastion  out front represents pretty well the sea bastion at Upnor. It is from Irregular Miniatures. 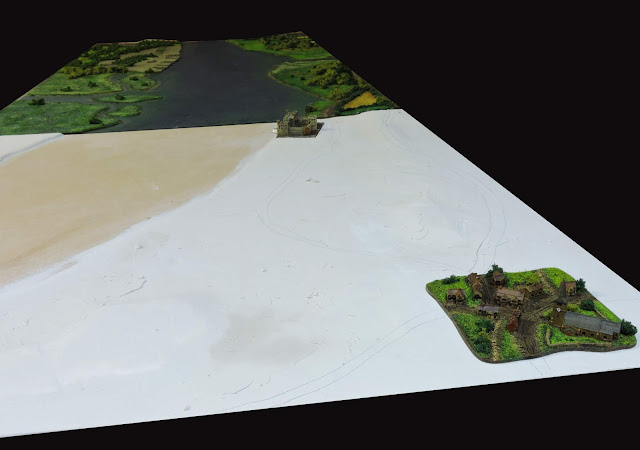 What is becoming known to me as the 'Upnor board' will be heavily wooded. You can see in the view above a vista from the northern high ground looking south and upriver toward the dockyard and Chatham. I have pencilled out the roads for my own guidance. For the high ground I have used both balsa and hex-shaped polystyrene pieces I used to use for 6mm GHQ MicroArmour.  This is a little tricky to do but worth it in the end. Smoothing the edges of these pieces really helped with the natural contouring. 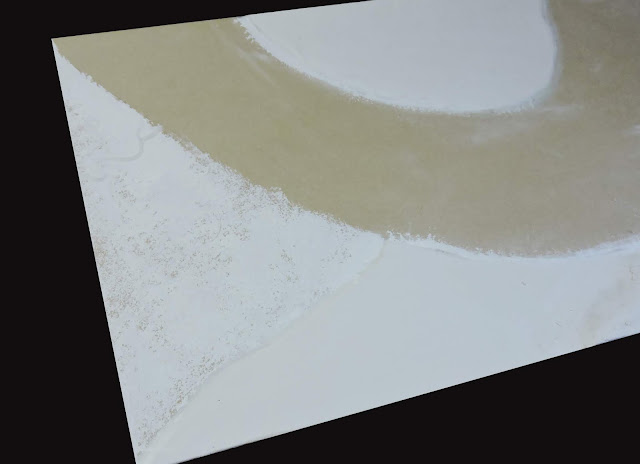 There are enormous areas of mudflats on the Medway Estuary. I decided to try and model these and this is the first attempt. Achieved by sponging very wet plaster and using my fingers! The real acid test will be when its painted and washed and then varnished. 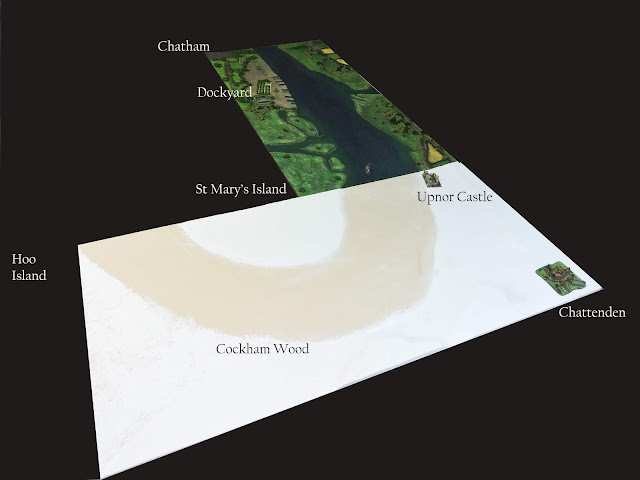