Megorsky: a review of the Russian Army in the GNW - An essential! 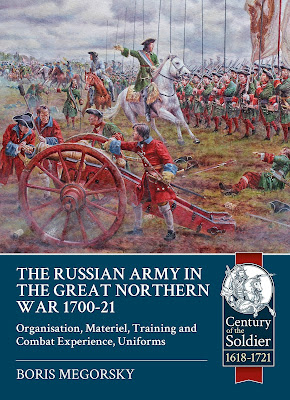 This book is an essential asset for anyone interested in the Great Northern War. I believe it will become the benchmark  hobby book for the Petrine Army and although it does not mention figure gaming specifically, it focuses on detail and content continually sought by gamers.

Comparing it with publications of the past, the gulf between it and assumption, conjecture and the rehash of secondary or tertiary source material becomes quite clear. Megorsky is a myth-buster and is able to be so as he appears to have access to primary source material and a battery of similarly minded experts through which his challenges and  corroboration are possible.

What I particularly like about his work is a constant, high-visibility skepticism. He challenges lazy thinking, cliche and the over-romanticizing of various aspects of Petrine military performance. His is not averse to contradicting well-established reference work such as Viskavatov and offering substantive counter argumentation or rebuttal where necessary. His view of both Swedish and Russian military capability is extremely balanced and devoid of the misty-eyed jingoism often evident in writing about military subjects.


The book is positively crammed with detail of the like never seen in English before. It is as if someone has walked into a totally dark treasure cave and switch on a bank of stadium lights. Although many attractive myths may have been blown away regarding uniform style, colour, weapons and tactics, vastly more truth of an even more bizarre and exotic nature has been revealed. This counter balances perfectly. It was a fascinating age of wondrous facts and events.

For me, detail on dragoon mounts and tactics, infantry unit organization, small calibre support artillery, unit origins and size and combat capability were amongst the most informative nuggets however, each page is sprinkled with informative gold dust.

What was most satisfying was the corroboration of many research decisions we made when designing our own Russian GNW range. Clib's wisdom in dismissing several well-established but clearly inaccurate cliches combined witht searching Russian sites, including those of the oft featured Preobrazhensky Lifeguard re-enactor group, proved a sound investment in time. The plates featured mirror many of the sculpting design decisions taken by Clib during the creation of our miniatures.


I am hoping collectors take note of the high proportion of kartuz/karpus hats Megorsky suggests. We'll now issue mounted dragoons with kartuz as a result. The style favoured in both illustration and by the PLR group is the montero we have featured not the square-topped version seen in many previous ranges. The absence of the cravatte with bow, scalloped pockets and English style high-mitres from our figures also feel like wise decisions.

It should not be underestimated how densely packed this book is with information. The records of quantities of powder and ball expended by units in some of the key battles suggests that far from being an army of lumbering zombies there only to provide fodder for super-human Swedes with hungry weapons, the Petrine Russians on many occasions stuck to their tasks with grit and guts and made life very difficult for Charles XII and his generals. There are many insights into the Swedes too and parallels with the Wehrmacht in Russian 1941-44 will not escape readers.


Do not be phased by the price tag of this book . It is, for a serious student of the GNW absolutely essential. Throw away your old Osprey books or sell them on EBay you don't need them any more.

If I have a single gripe and, every reviewer should be as objective as possible, it is in the flow of the writing. The English is almost written in a Russian accent  ie 'let us consider infantry' instead of let us consider the infantry'. I got to the point of reading it in a 'Carry-On' Russian accent in my head - scanned quite well actually!

If the book runs to a 2nd edition Helion may wish to employ a native English speaking editor to tidy up what is a fantastic piece of work. Hell, I'll do it!