by Clarence Harrison August 06, 2017
Clarence Harrison - Work has been stupid the last few weeks, but I FINALLY got the Scandavian Pack Master model finished for my wolves from my Donnybrook Dark project...

The model is from one of the dismounted dragoon command packs (WLOA89) and I added the cloak with green stuff. I wanted the model to appear more like a civilian or specialist who lives outside of the uniformed discipline of the rank and file soldiers. Using a model from a different theater (and a fur hat) was a great way to make him stand out from the 'turnback' coats of the others, even though I used the same color palette as my garrison troops. 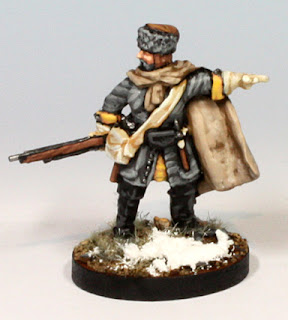 I'm very happy with how this guy turned out and shows even simple conversions can add a lot of character to an army!

Several people have gotten in touch to ask about the wolves. They are old Ral Partha sculpts that I've had for years. They are probably still available somewhere...