by augsburgeroberst October 31, 2019
14th February 1665: Off the Isle of Wight
Scenario name: Sovereign of the Seas

His Majesty King Charles II demands that every foreign vessel passing through English waters acknowledges his position as Sovereign of the Seas. In so doing each ship must lower its colours when an English warship is within sight. Although not at war, tension with France is mounting due to its support for the Dutch Republic which may soon fight England. A French squadron sailing from Brest to Boulogne appears to be ignoring the convention and has thus attracted the attention of an English patrol leaving the Solent.

His Majesty King Charles II demands that every foreign vessel passing through English waters acknowledges his position as Sovereign of the Seas. In so doing each ship must lower its colours when an English warship is within sight. Although not at war, tension with France is mounting due to its support for the Dutch Republic which may soon fight England.


Ship movements in the English Channel are always shadowed and a small but powerful French
squadron has been watched by various English sentinels from leaving Brest on April 2nd. Now passing south of the Isle of Wight, it has been intercepted by Sir Robert Barre’s squadron heading out of the Solent on a course to intercept.

The French are within a couple of miles of the English ships and to windward. None has made any attempt to lower its colours as the King’s warships approach. The three French ships Saint Philippe, César and Mercoeur made good speed eastward and appeared to ignore Barre’s squadron which was having trouble tacking toward them.


Barre in the Dreadnought, had left Portsmouth without taking on powder and ball so could not afford to engage in a prolonged exchange. Fairfax under Captain Robert Salmon was undermanned and also in an unenviable position were it to come to battle. The César had even less ammunition than the English flagship so neither commander harbours intentions of a full blown engagement.

The French commander Admiral Deremeaux had given orders that no ship should lower its colours nor open fire on the English. Any fight had to be initiated by Barre thus justifying any act taken in self-defence.

César and Mercoeur pulled away from the slower and larger Sainte Philippe and their evasive movements finally allowed the Mary Rose to catch up with the larger César .

Without hesitation Captain William Reeves ordered his gunners to rake her at close range. There was no half measure. The full weight of shot ripped length ways through the hull. Extensive damage toward the stern jammed César’s rudder to starboard forcing her to begin turning in toward the coast.

She was not going to get away and this immediately forced Deremeaux's hand. He signalled that a general engagement should begin. Reeves performed a very skilful manoeuvre bringing his ship into the wind and turning round to perform the exact same pass on Mercoeur. She too reeled as Mary Rose’s gunners pumped close range fire into her hull. Her gun deck was ripped apart and she was holed multiple times below the waterline immediately slowing down. 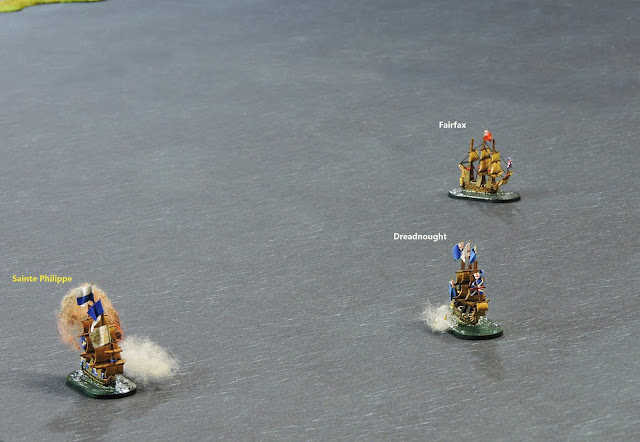 Reeves’ crew cheered their captain’s bold seamanship and readied themselves for the next stage of the encounter. Further out into the channel Sainte Philippe and Dreadnought sailing on parallel courses, opened fire at about 300 yards. The impact was mutually devastating. Dreadnought lost the top of her mainmast and bowsprit whilst the large French ship caught fire on her gun deck. Dreadnought’s speed dropped quickly and Sainte Philippe altered course to close and attempt to sail across her bows.


By now César’s steering problem had forced her back in a westerly direction and away from help. Even at extreme range the undermanned Fairfax was able to land shot upon her compounding the misery.  Mercoeur was being out sailed by Reeves and although the French flagship was likely to triumph over the wounded Dreadnought, Deremeaux lowered his own colours signalling that all ships should do likewise and disengage. 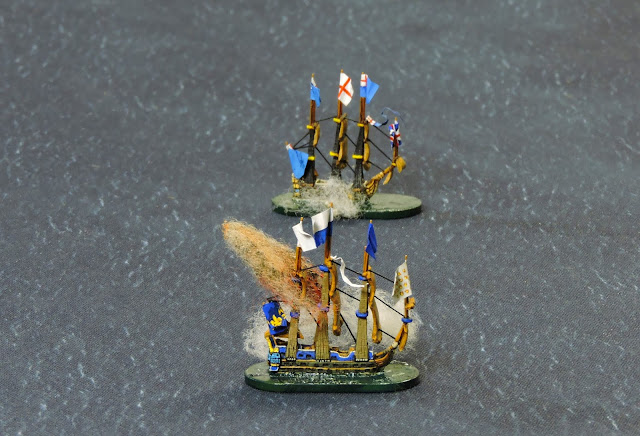 Largely due to the skill and courage of Reeves and his ship, the King’s will was imposed on the French squadron which gathered itself together with César having to be towed all the way to Boulogne. Dreadnought immediately turned for Portsmouth whilst Mary Rose and Fairfax followed the French till they made port. 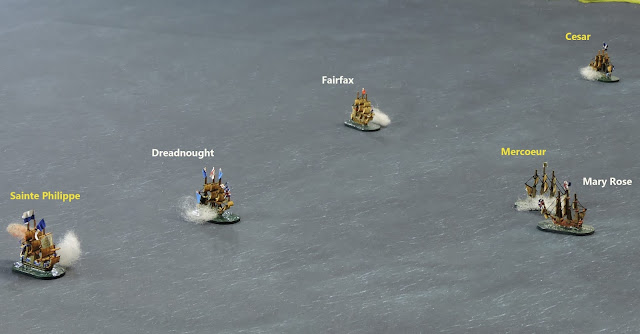 Victory for Barre’s squadron in the opening battle of the campaign.