The Dutch East India Company (VOC) has been building trade via Gold Coast ports for several years. The English have become increasingly interested in bolstering their cash strapped economy and its own Royal Africa Company has enlisted the support of warships to restrict Dutch trade and enhance English commercial reach. Two large merchantmen are three months overdue in Amsterdam. De Ruyter's squadron was ordered to sea to find them. He has tracked the VOC merchantmen to a bay controlled by the RAC where they are being 'detained' for unpaid duty on goods to be shipped to Europe via English waters. The vessels are being protected by an English warship and lie at anchor under the guns of a large fort. The wind is blowing offshore making an approach to the coast difficult.

The mission is to free the vessels and allow them to make their way home. De Ruyter is ordered to avoid if possible, direct conflict with the English as he knows neither their attitude to challenge nor the size and readiness of the vessel at anchor.

In the face of a very strong headwind Du Ruyter tacked, formed his squadron into line and charted a circuitous route to the bay containing the two interned VOC ships Brugge and Gelderland. His intention was to snatch them without a fight and thus avoid any incident which would have serious political repercussions at home.


By threading through the islands and coming upon the English trading settlement from the south, he hoped to outmanoeuvre his opponents. He did not reckon on the appearance of a patrolling English warship as it nosed round the headland of a rugged island heading directly toward his own  squadron.

This vessel, the 4th rate Ruby, was returning from a sweep and its course for port cut across de Ruyter’s chosen approach. Warily each side eyed the other but no hostile action was taken. The distant outlier Fort Rupert fired a signal shot with the intention of deterring any approach by the Dutch and alerting the English on the mainland. Ruby crossed the wake of the Dutch line led by the hoeker Groen Kameel which raced ahead of the larger ships.


The already rough conditions worsened as the wind changed direction to south east and picked up speed. De Ruyter found his command sailing directly into the wind once more. The Dutch captains delivered a sublime demonstration of seamanship by tacking effortlessly through the narrow island channels. Only the Provincie van Utrecht was caught out and found herself forced about by wind and currents in the narrows. She was thus separated from the main force and compelled to seek a direct approach following the Ruby north east.


The Henry, forewarned by the alarum shot from Fort Rupert was frantically readying for sea but had not made the final preparations as De Ruyter hove into view hugging the coast from the south and running with the wind at his back. The two English mainland forts fired warning shots which were duly ignored by the rapidly closing Dutch.


Ruby's direct route had beaten everyone and she now lay off Fort Charles awaiting developments. The action started in earnest on Turn 5 when the few guns in the tiny watch fort named for Prince Rupert opened up on the Utrecht sailing almost under their muzzles. No ball found its mark.

Turn 6
Henry was making sail out of the bay and approaching Fort Charles from the north. By now De Ruyter was only a few hundred yards off the fort and clearing his guns for action whilst his 4th rates dashed for the VOC vessels moored in the shadow of the forts. Just at this moment the previously unseen brig Vixen sped out of a little island cove, ran right under the bows of Spiegel and opened fire at point blank range. She could not fail to hit her target and several rounds slammed into the foc’sle of the admiral’s flagship. The guns in both landward English forts trained on Spiegel and several shots hit their mark.


Turn 7
The wind shifted into the east and De Ruyter slammed his ship straight into the tiny Vixen striking her amidships. As this drama played out, Henry’s larboard broadside came to bear against Spiegel and the full weight of around thirty guns paid out. Knowing full well that the Vixen was likely to be caught in the storm of shot, Henry’s captain did not hesitate to sacrifice his brave comrades in an attempt to disable the Dutch flagship. The crippled Vixen disintegrated in the welter of cannon fire and although the Dutch ship too suffered, it sailed on relentlessly towards the English 2nd rate.

Utrecht and Ruby squared up for a punishing duel near Fort Rupert and in the equally balanced exchange the Dutch ship suffered terribly as the heavy English guns tore out a section of her lower gun deck. The Ruby caught fire and the strong offshore wind fanned the flames into her sails and rigging. De Ruyter’s firestorm served its purpose.

Preoccupied with this brisk engagement the English had nothing to offer against the two 4thrates which slipped alongside the VOC ships.

Turn 8
Geloof and Noorderkwartier efficiently grappled and boarded. The struggle against the English soldiers on board was brief although clearing the decks of Brugge took considerably more effort than Gelderland. Eventually, both ships were back in possession of the Hollanders. All the while, with mayhem offshore and close combat under the very muzzles of the forts’ guns, the garrisons remained silent and safe within their walls.


De Ruyter exhibited all of his legendary skill in outmanoeuvring the heavier Henry and pouring fire into her at close range despite the pitching heavy seas and high winds. Provincie van Utrecht relentless harried Ruby which continued to burn fiercely and another broadside tore holes along her waterline, partly dismasted her and blew guns and carriages into the sea.

Turn 9
The wind reached alarming strength wrenching control from the captains who attempted to battle the weather and each other. Ruby was being carried further out to sea, burning along her entire length and sinking rapidly in the heavy swell. Utrecht kept pace shooting and manoeuvring around her. Admiral de Ruyter threw his ship around and maintained his fire on Henry. By this time Noorderkwartier had put a skelton crew aboard Gelderland. Both quickly cut their moorings and picked up speed with the wind behind them. The stunned garrisons were stung into action but the fire offered at the retreating ships was desultory and ineffective. 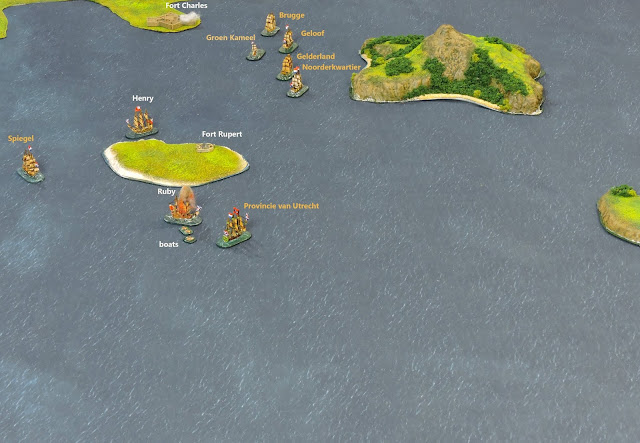 Turn 10
Brugge, Geloof and Groene Kameel quickly followed and the mission was all but complete. Henry was too slow to follow the swift ships which slipped further out of reach with every minute. The postscript involved the Ruby, partly submerged but still ablaze begin abandoned by her crew many of whom drowned in the gathering tropical storm. Du Ruyter ordered no survivors should be picked up. They were deemed near enough to Rupert Island to have adequate chance of salvation. 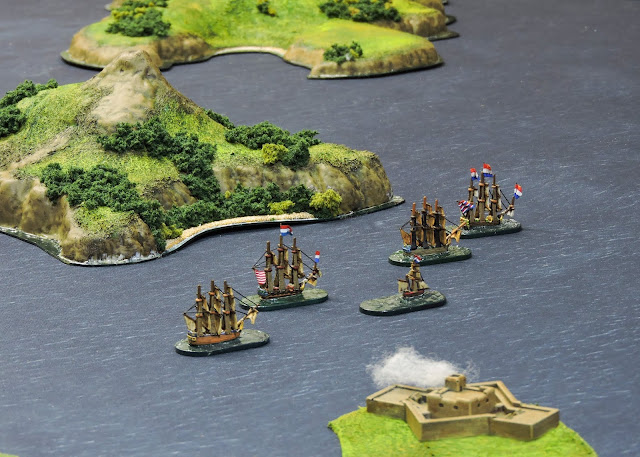 De Ruyter’s mission was a stunning success. Expertly planned, almost flawlessly executed in very challenging conditions. The only small cloud on the horizon was the failure to rescue the majority of the VOC sailors in protective custody within Fort Charles.