Naval campaign game 5: All hands to the oars!

November 23rd, 1688: Copenhagen
Chaos reigns supreme in England. The invasion by Willem of Orange less than three weeks previously has caused the army to disintegrate. The naval service is in turmoil, torn between loyalty to its old commander in chief and King, the officers and men weigh the options for their individual and collective futures.
Amidst the warmth of a harbourside tavern in freezing Copenhagen, a conclave of naval officers and merchant captains loyal to King James secretly discuss removing their vessels from port and sailing for Scotland or even Ireland. The Danes already hire thousands of troops to the Dutch and their Imperialist allies. An aggressive move may prompt King Christian’s soldiers to arrest the foreign sailors and impound their ships. To further complicate matters, the English 2nd rate Neptune is at anchor near the Danish naval yards and her captain is a notorious anti-papist and agitator against the King.

Word has arrived that if any captain wishes to make a bid for freedom and declare for King James, a French man o’war will be standing by in the Kattegat and would offer convoy across the North Sea. A conclusion is reached. Before dawn on the 23rdfour ships will quietly slip their moorings and head out of Copenhagen without a fuss. Once in the open waters they will sail for Scotland.

Turns 1 to 6
The operation was to start at seven o’ clock in the morning. It would not be light much before nine and by then the small flotilla hoped to have moved beyond the many shore batteries and forts which bristled around the Danish city. No one had bargained for a complete absence of wind and so when the appointed time arrived the four ships were forced to lower boats and be towed out of Copenhagen.


Luckily, in addition to the darkness, a heavy fog lay over the harbour. Blanketed within, O'Brien's flotilla cautiously inched out to sea being as quiet as possible. By break of day the fog had lifted and King James’s men could see they had made very little progress and still lay under the guns of the formidable Fort Carl and the anchored 4th rate Gyldenløve. Seeing four foreign vessels being towed out together under cover of darkness the Danish ship fired an alarm which was duly ignored. Onward the Jacobites rowed with their crews nervously toiling at the oar.

Gyldenløve’s captain fired a second shot in warning seemingly reluctant to attack vessels which themselves seemed disinclined to fight. The shots were however heard aboard the Neptune lying less than a mile distant. Her angry captain chided his crew to ready for sea and a pursuit of traitorous countrymen.

Finally, tiring of his unheeded warning the Danish captain opened fire landing a couple of shots upon the yacht Kinsale but doing no great damage, At this point the French 3rd rate Indomitable appeared on the horizon and the bid for freedom began in earnest.

Without wind the ships inshore had to toil seaward by the sweat of their crews efforts. Indomitable and a newly arrived English frigate were by contrast, being carried inshore on the currents by dint of being becalmed. The Neptune was finally ready for sea but subject to the same conditions as every other vessel, her boat crews struggled to get the extremely heavy ship moving at all. The Gyldenløve offered steady if unenthusiastic fire toward the slow moving Jacobite vessels and this time found the range of Sligo.

Turns 9 to 12
The limp sails stirred and a gentle breeze rose from the south. Immediately the experienced sailors aboard Neptune and Sligo gathered in their boats and made sail. The remaining Jacobite ships continued towing with scant progress. 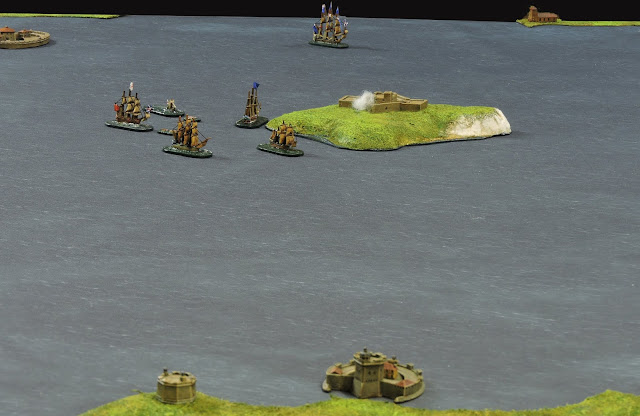 Out to sea the Indomitable and the English frigate Oxford closed rapidly to gauge the respective appetite’s for battle. Eventually Derry gathered in her boats and got underway. The guns of Fort Carl spoke once more, this time, landing some hits on Sligo which sailed right under its walls. Thus far, no Jacobite ship had fired a shot.

At long last Limerick managed to gather in her boats and get under way whilst at sea, the French captain demonstrated far more skill than his English counterpart who, bringing his ship directly into the wind was caught in irons whilst the larger and heavier Indomitable slipped nimbly between the inshore islands cutting across the bows of Neptune. 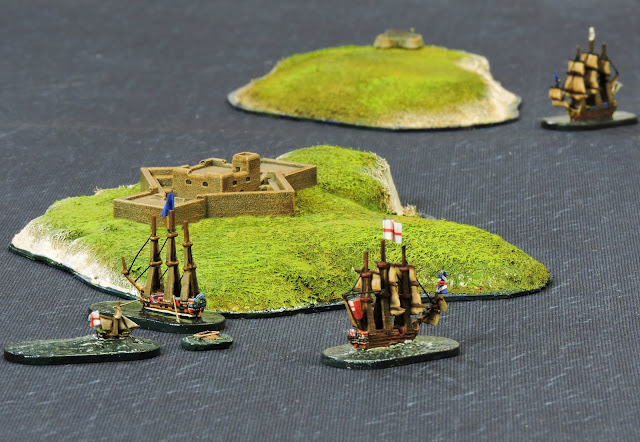 The French crew’s gunnery did not match the sailing prowess of their captain and the English ship sailed on. The little Kinsale had still not managed to bring in her boat and fell further and further behind her companions as the rowing crew tired.


Turns 13-18
The wind changed to a south westerly but still Kinsale rowed on under the Danish guns. Oxford attempted to interdict the progress of the Jacobite ships but her captain and crew did not possess the experience to manage the situation.


On Turn 14 the battle finally erupted. Several ships exchanged fire but the most dramatic incident occurred when Oxford raked the Derry starting a fire which burned for the rest of the action.  The slow moving but competently handled Neptune finally got her formidable armament engaged by delivering a broadside against Limerick badly damaging the upper structure.


Unable to get the fire aboard his ship under control the aggressively minded Captain Caulfield of Derry steered directly for Oxford and grappled her. His men scrambled aboard and a desperate melee began which hung in the balance as Derry continued to burn.


The Jacobite crew were losing the fight but O’Brien sailed his ship the Sligo along the other side of Oxford and the Kinsale, finally under sail, grappled the stern. Oxford’s crew was stunned and overwhelmed. Despite this success Derry’s crew was forced to abandon her for their prize as the fire had run out of control and gutted the ship. 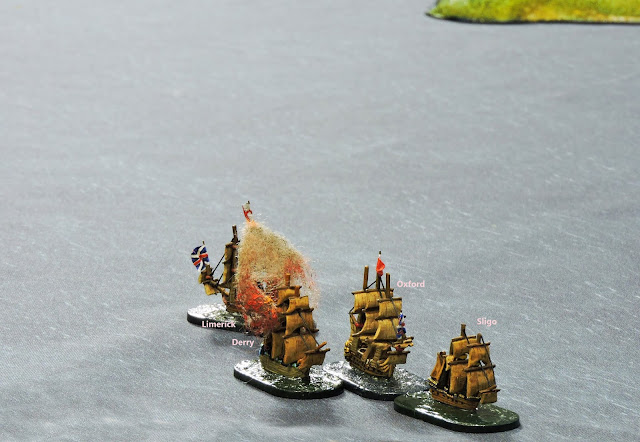 At this point the Neptune recognized that although the most powerful ship in the fight she was likely to be outmanoeuvred and suffer the same fate as Oxford. Her captain disengaged and headed back toward Copenhagen.

O’Brien’s motley flotilla had achieved its mission as the expense of the gutted Derry. Sligo was able to take Oxford under tow. The damaged 4thrate almost foundered but amazingly, O’Brien and his French escort managed to get the ship all the way to Dundalk although it took the best part of three weeks to make the journey.