by augsburgeroberst December 27, 2019
Visitors to the blog may remember Sir Jeremy Smith's failed attempt to convoy merchantmen into Tangier past Berber Corsairs:

Here, Smith attempts to root them out in their home port....


The humiliation suffered within sight of Tangier on March 5thso enraged the King and the Navy Board that Sir Jeremy Smith was ordered to root out the nest of pirates and destroy them. Failure would lead to public disgrace and the end of his career. Initial forays failed to locate any forces of significance but, information obtained from prisoners taken in a land expedition told of the arrival of captured English ships at Tripoli during April. Smith left Tangier on June 9th hugging the coast and exploring every significant eastward port and anchorage without success. By the time his squadron reached Tripoli it was itching for action. Windward of the port, Smith formed his larger ships into line flanked by two groups of smaller vessels one under Captain Ralph de Vere and the other commanded by Captain Alexander Kelvin. Abdullah’s corsair fleet was lying in various bays from the port and stretching east. As Smith’s eleven ships sailed over the horizon the Berber fleet scrambled to ready for action and put to sea in the face of a brisk northerly headwind. 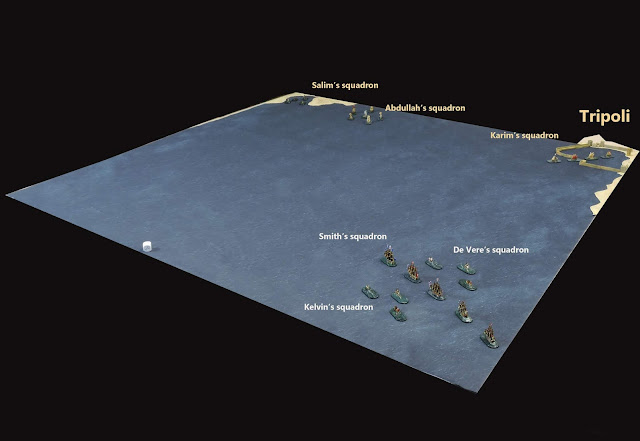 Smith must destroy the pirate fleet and ensure it has no offensive capability after the battle. Any other result will be a defeat for the English. 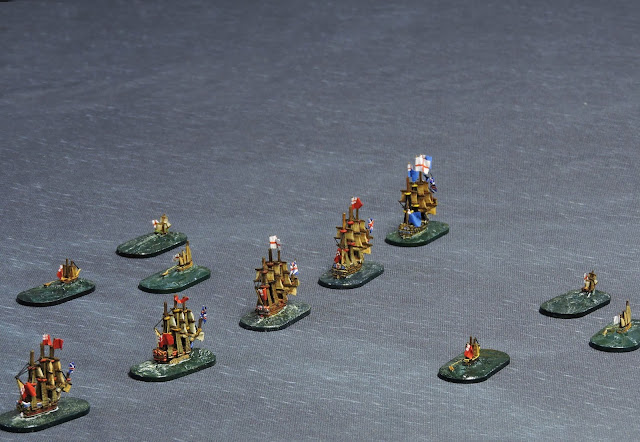 
Total 790 points
In a successful boarding action, all Berber vessels add +2 to their die throw per combat round to simulate their compliment of pirates bent on capturing enemy vessels.
Smith has +1 on Initiative throws. Wind is blowing from the north at moderate speeds and the swell is gentle.

Turn 1
The Berber squadrons had considerable difficulty leaving their anchorages due to the strong headwinds. Smith signalled that De Vere’s ships should turn south toward Tripoli and harass Karim’s squadron emerging from the harbour.


Turn 2
The central Berber division split with its heavier ships making for Smith’s flagship Lion whilst two lighter vessels headed toward the rear of the English line. De Vere’s nimble ships were lively and aggressive. Their gunnery was accurate with every English ship landing shot on enemy vessels and each hit soliciting rousing cheers from their sweating  crews. Aboard the Bryar whilst vigorously encouraging his men, the gallant De Vere was struck down when Saeiqa found its target. His sudden death so early in the day stunned the English.

Turn 3
The wind changed direction to NNW. De Vere’s little ships which had raced through Karim’s squadron came about before sailing under the harbour guns of Tripoli. Meanwhile, Smith’s main battle line had moved east and come under attack both at its head and tail simultaneously. The xebec Sayd in company with the ex- Africa Merchant now renamed Malik, circled behind the back marker of the English line the small 5th rate Guinea. She immediately started to take hits but as the fire was coming from astern, had nothing to offer in return.

At the head of the line a furious battle had erupted as the galleys Bariq and Nariin cut across the bows of Lion and raked her. The low angled fire punched several holes below the waterline and immediately the English flagship began taking on water and slowing down as her lower gun deck flooded. Simultaneously the guns of both Lion and Mary found their targets.


Lion’s heavy cannon shredded the rigging of Amyr carrying away all of her masts and leaving her helpless. Amyr was the renamed English prize Molly captured less than four months previously at Tangier. Mary pounded the privateer Najam Shamal the old timbers of which caught fire. Emulating the gallantry of De Vere’s small ships, Kelvin’s brig Isis also struck against the large flag galley Nariin.

Turn 4
The manoeuvrable Berber galleys ducked beneath the bows of Lion coming up on the larboard of the east bound English line on a parallel course but heading west. As Smith brought his own ship about by turning to starboard, the cohesion of his battle line disintegrated and the following English vessels also adjusted course.

Abdullah’s other ships together with Karim’s leading vessels were swarming off Guinea’s stern. Notwithstanding the confusion and her own considerable wounds, Lion roared at close range raking the Najam Shamal with a horrific broadside which caused the old warhorse to buckle and explode as her powder magazine ignited. The Najam was a rebuilt galleon of Armada vintage captured from the Spanish around 1620 and since that time serving various Berber privateer captains. Her long years at sea ended spectacularly and abruptly when shortly after, the passing Mary and Dragon finished her off with close range fire. Even in this moment of high drama Lion had to fight off a poorly executed attempt by the dhow Qarash to board. The smaller ship was brushed aside and Lion continued to execute her sharp turn.  Mary used the close quarter situation to pump shot into the enemy flagship Nariin passing her larboard side at less than 50 yards distance.


The two squadrons of small ships were in the thick of the action. With no officer in overall command the three vessels of De Vere’s group mobbed the larger ‘Asada (curiously, the Arabic word for Lion) landing several blows. Kelvin’s small yacht Greyhound fought off a boarding party from the dhow Dualifin which drifted off after the repulse.

Turn 5
Smith’s line slowly began to come about in a ragged manner but the highly agile enemy galleys had already altered course again and were coming at the lead English battleship from the north. It was clear they were attempting to isolate  Lion and finish her off as she sunk lower in the water and began to list a few degrees to starboard. Having failed attempting to board Lion, the Qarash tried once more with the smaller Dragon but was again driven off. Guinea, now somewhat isolated, poured a perfectly timed broadside into the passing galley Bariq inflicting massive damage to her lower deck, holing the hull and smashing oars and steering gear.
The six smaller English ships performed outstandingly. Kelvin’s three ships scored numerous hits on Salim’s gun-less dhows whilst De Vere’s squadron continued to have the best of the cat and mouse chase against the larger ‘Asada. Despite the serious state in which Lion found itself, the English seemed to have the upper hand and the cohesion of the Berber fleet was disintegrating.


Turn 6
The enraged pirates aboard the dhows Dualifin and Omar grappled and boarded the tiny yacht Greyhound, one on either side. Outnumbered and in danger of annihilation the English sailors fought ferociously throwing back both attacks and cutting loose the enemy ships which were both greatly damaged in the process. Each drifted away whilst Greyhound’s crew quickly cleared their deck and prepared to sail back into action. Many ships were now engaged but the Lion, slow, listing yet remaining a threat, closed with the mast-less Amyr and drilled her hull shooting out rudder, steering gear and wheel.


Turn 7
The wind changed again to a northerly but dropped in speed. In the confusion of battle Guinea collided with the galley Qdis but uncharacteristically, the English ship came off worst sustaining massive damage which slowed and de-stabilised her. Qdis together with the proximate Malik pounded Guinea the hull of which could endure no more. The crew abandoned her as she partially submerged by the stern. Portland’s powerful guns shredded the upper decks of Saeiqa whose captain could not be found in the aftermath.  The inexperienced crew decided to head back to Tripoli but the ship was in such a poor condition that this was easier said than done. ‘Asada also turned for home having arrived at the battle with very little powder and shot and with that expended in the dogfight with De Vere’s ships, her crew had nothing left with which to fight. The smaller English vessels were extremely successful throughout the action as Hart finished off the drifting wreck of Dualifin.


Turn 8
It was clear that Lion, Smith’s flagship was in mortal danger. Low in the water with her hull partially filled with water she manoeuvred further inshore and away from the rest of the squadron, unable to turn. Every English ship large and small made for the Lion but Smith had already decided to transfer his flag to the Mary which was closest.


A boat was lowered as several enemy vessels gathered around Lion with the intention of boarding. Unable to escape, the crippled flagship collided with Bariq which although badly damaged by the incident mustered a boarding party which made it onto the deck of the English ship. With Smith’s boat pulling for the Mary he looked back to see the bloodied crew of the doomed Lion repulse the enemy, cut the wrecked Bariq loose and stand defiant awaiting salvation or death.


Turn 9
On successfully reaching Mary, Smith immediately ordered that she come alongside the Lion and sink her. The disgrace of having his flagship even as a hulk, captured by the enemy could not be tolerated. Various enemy ships had clustered around Lion and into their midst sailed Mary. The broadside was devastating and although she did not explode or catch fire the Lion rolled on her side.
Mollified by this act, Smith’s new flagship found itself assailed from all directions. In a hail of shot Sir Jeremy Smith was struck down in full view of everyone. At the climax of the action with ships fighting all around, the perilous situation in which the English squadron now found itself compelled Captain Edward Spragge formerly the Lion’s captain before Smith used her as flagship, to order ‘disengage’. Coincidentally Abdullah Bey had just made the same decision on his own flagship Nariin.


As both fleets pulled away the Hart finished off Omar and the little yacht Lilly sunk the drifting wreck of Bariq.

The English squadron failed in its mission to completely destroy the Barbary pirate fleet. In a sortie which would cover over 2,000 miles before it was over, it had lost its flagship, its commander, another captain and a 5thrate. The enemy fleet lost four vessels but maintained operational capability and was less than two miles from one of its main ports. Spragge, now in command had perhaps another three or four weeks at sea before making port at Tangier and in that time the damaged vessels Mary and Dragon might deteriorate further.

Total points lost
English:425 (54%)
Berber: 558(71%)
The Berber fleet was not destroyed but its operational capability was hugely diminished by Smith’s efforts. His death will be spun as a great victory for the Royal Navy which gains a hero without the embarrassment of explanation. The problem of piracy on the North African coast has not been eradicated and the pirates themselves now have some measure of a large-scale sea battle and what they might need to do to prevail if at some point in the future they face the muzzles of the big English guns.