by Barry Hilton August 14, 2014
The Gostelowe Return flags are now available in the LoA shop. If you order both sets, we will send the 13th flag (rumored to be carried by the 1st New York in 1777) free... 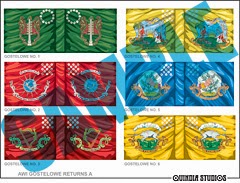 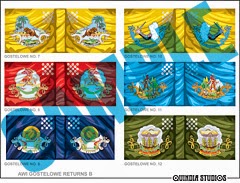 Gostelowe Return 13
The standards of the Gostelowe Return are named for Major Jonathan Gostelowe who prepared an extensive inventory (or 'return') of arms and other military supplies on hand in July and August of 1778 in Philadelphia. One section of the report is titled "A Return of ye New Standards & Division Colours for ye Use of ye Army of ye United States of America In the Possession of Major Jonathan Gostelowe, Com'y Mil'y Stores". There are thirteen standards, most listed with their color, their device, and their motto.

The standards are based on the designs of Edward R Richardson in his book Standards and Colors of the American Revolution. Besides the descriptions given in the return, Richardson drew on devices of seals designed by Francis Hopkins and Benjamin Franklin and similar iconography from the symbols of currency and state arms of the colonies.
We really don't know who carried these, but here are some speculative choices...
One: Pennsylvania (Philadelphia Militia)
Two: Pennsylvania (Captain James Duncan of Hazen’s Regiment recorded in his journal that the same motto was on a flag he planted on the ramparts of the trenches at Yorktown.
Three: No information
Four: New York (the rising sun symbol is part of New York’s state arms).
Five: No information
Six: No information
Seven: 3rd Virginia (captured at Battle of Waxhaws by Lt. Col. Tarleton).
Eight: No information
Nine: Connecticut (the state ordered all its regiments to use this device on its colors in 1780).
Ten: Massachusetts (similar icons were used on the standard of the Bedford Troop of Minutemen and the state arms)
Eleven: Massachusetts (the state arms has similar symbols).
Twelve: No information
Thirteen: 1st New York (same symbol in drawing on a powderhorn that belonged to a soldier of the 1st New York regiment of 1777).
No doubt gamers who are seeking these have their own theories, but this will get you started. More American flags coming soon...
Share Share on Facebook Tweet Tweet on Twitter Pin it Pin on Pinterest
Back to The League of Augsburg