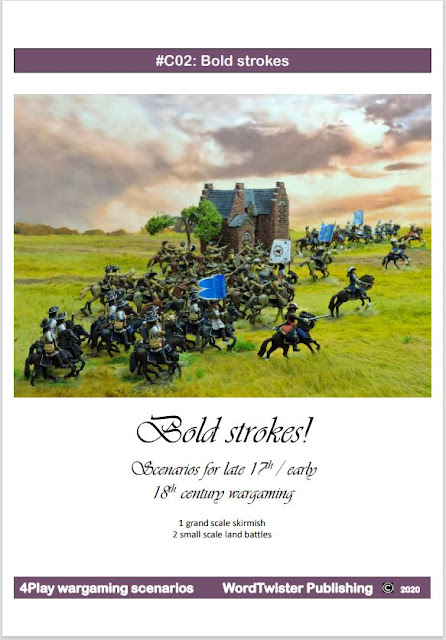 4Play has proved to be popular. Visitors to the blog will have noticed the high level of output which has been matched by a lot of inbound emails regarding content. That is just what I need. As an example, requests this week alone have included; more GNW, a pack covering a WTK tutorial game, The Covenanter Rebellions, more on Flanders campaigns, Sedgemoor, more Ireland focused material and, something with winged hussars in it please!

In an effort to continue to give something back to the community, whether you buy 4Play packs or not, I have compiled a second complimentary pack which anyone who requests it can receive free. It is called Bold strokes!

This pack has an equally wide spread as the first. It features;

The invasion of Greenock. Yes you read that right and this is not an influx of Partick Thistle supporters twice a year! It was an amphibious landing by Argyll's Whigs in 1685 which was met by a detachment of mounted militia on Kilblain Brae. This scenario is fought as a grand skirmish with a full militia troop of 40 cavalry against Whig musketeers on boats with naval gunfire support!

The second  scenario is a trip to the Rhine. Neuss 1689. The Prussians and Dutch attack a French supply column bound for Bonn. This encounter was the trigger for the Battle of Herderbosch which appears in full in the new scenario boook for Beneath the Lily Banners due out before Christmas. This is a small battle featuring lots of Allied cavalry against a mixed French force. Again, a historical event.

The third scenario is from the Great Northern War. The Swedish attack at Humlebaek on Sjaelland in 1700. The Danes opposed this landing with a scratch force of regular cavalry and militia. It makes for an exciting quality versus quantity game and can go either way when you play it.

I will continue to release the occasional complimentary pack as we go. A huge thank you to everyone who has bought 4Play scenarios. I had no idea they would catch fire the way the have done!

Please email as per usual wordtwister@hotmail.co.uk for this one.