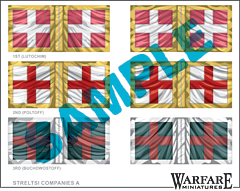 Having had two early Russian figures sculpted in the test phase of the Great Northern War project I decided to put them into production and thus needed some flags which were not in the later pattern to use with them. 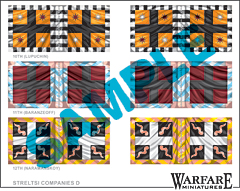 I did a lot of searching and found some websites detailing various patterns of Streltsy company flags from the period 1600 - 1660. Bearing in mind the anachronistic nature of the Streltsy in the changing and increasingly regular military world of the late 17th century I thought that transitional units, possibly formed from men previously serving in Streltsy companies may have used older style or existing flags. No definitive guide to Russian flags in the earlier period of Peter The Great's reign is available in English and so some guesswork and interpretive deduction has been applied.

Illustrations sometimes show the Streltsy flags as oblongs by we've kept these in the square shape.

This post is also by way of a disclaimer. Clarence and I want to be clear on the following points:

1. These designs are not conjectural by us, they are taken from illustrations.

2. We are not suggesting they survived till the late 1690s as they are from the 1650s. We are
suggesting that they may have been used in the later period for lack of definitive information to          the contrary.

3. At least some of the western style units formed in the late 17th century under foreign officers are         likely to have drawn some of their rank and file from Streltsy companies which were being broken     up at the time. 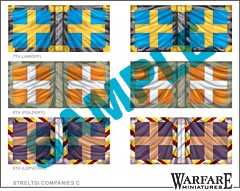 We believe the flags are a very colourful addition to the range and of course could be used for traditional Streltsy units of the earlier period too.


Each sheet is now available in our online store