by David O'Brien September 17, 2014
Dave O'Brien - After originally discussing these type of small battles with Barry over a year ago we've finally gotten around to playtesting them and this was also the first outing of my Kirke's regiment at their full size for which they were originally painted for. 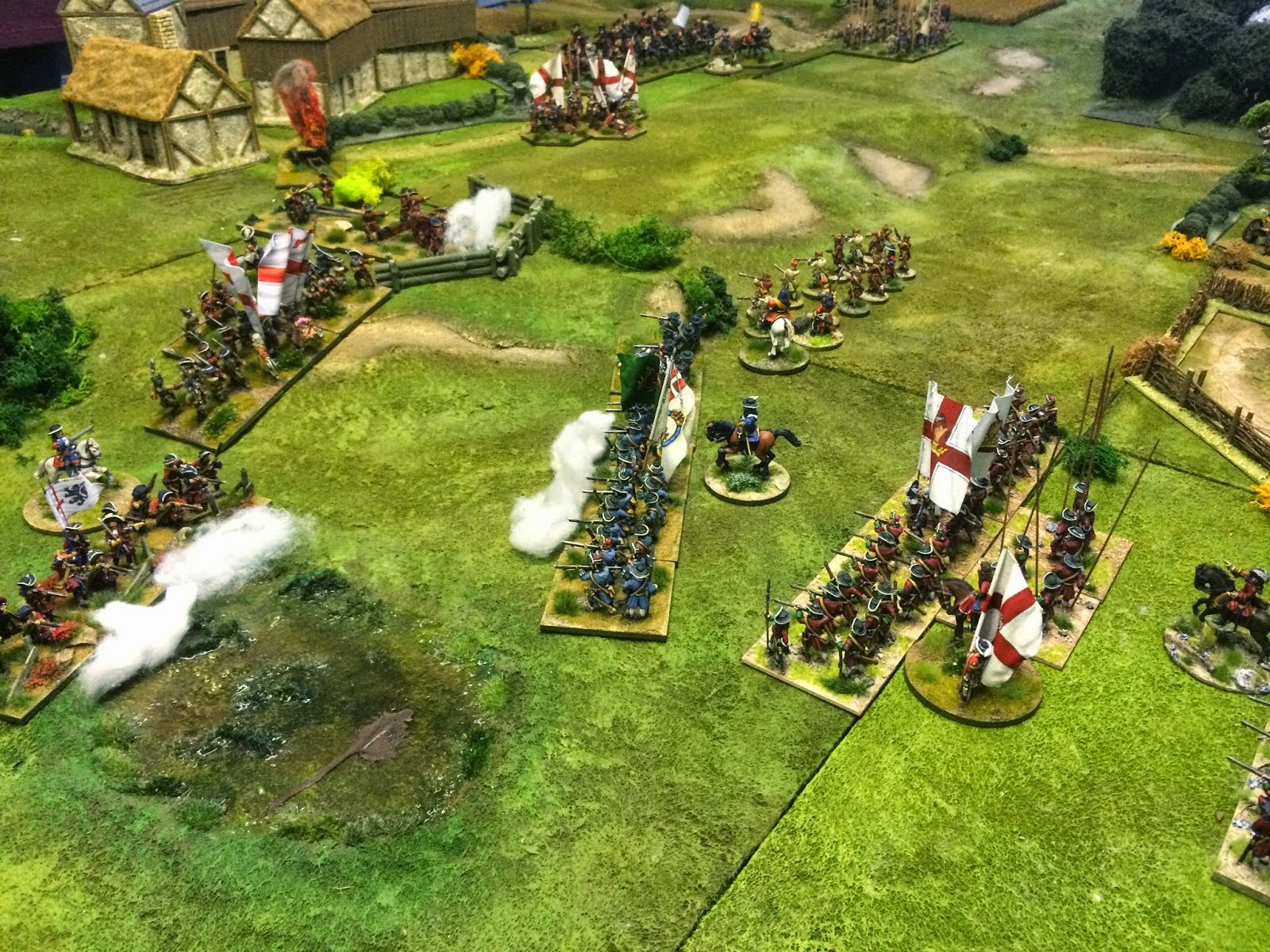 Both Bob and myself had seen a rough draft of the rules about six months before but these had since been beefed up and bore very little resemblance to what we had originally seen so Barry controlled the rules and took notes while Bob and myself did the actually gaming.

The first game probably tested the rules to full extreme as we used 8 units per side on an 8x6 table which gave a great game. The rules themselves are a compilation of parts from BLB and Donnybrook and are used for fighting small battles with no more than 8 units per side and in most cases usually less which means that characters and small unit tactics and formations are more important. 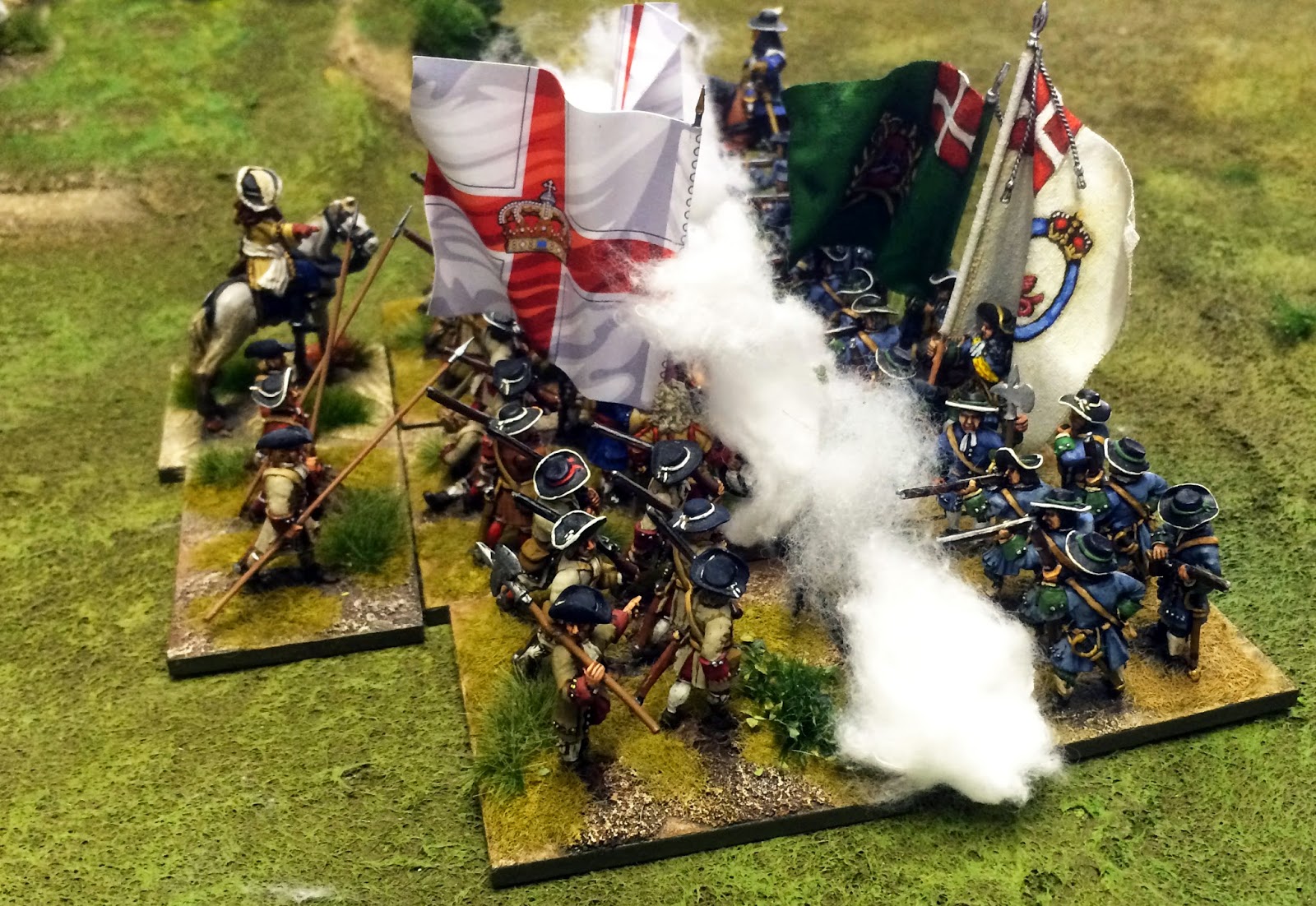 I won't go into a move by move description of the battle as Barry has done that in a number of other articles (with more to come). Barry had already pointed out the costs of the units - yes he's actually decided to produce a points count for this set of rules but I feel that actual cost of some of the units and characters still need to be finalised but that will come through further playtesting. The only thing Bob and I had to do before the game started was to dice up the quality of our Colonels which can vary from a real firebrand to a complete idiot and added an interesting aspect to the game. Apart from ourselves there are also groups in the USA and Scandinavia who are also trying out the rules and offering feedback. 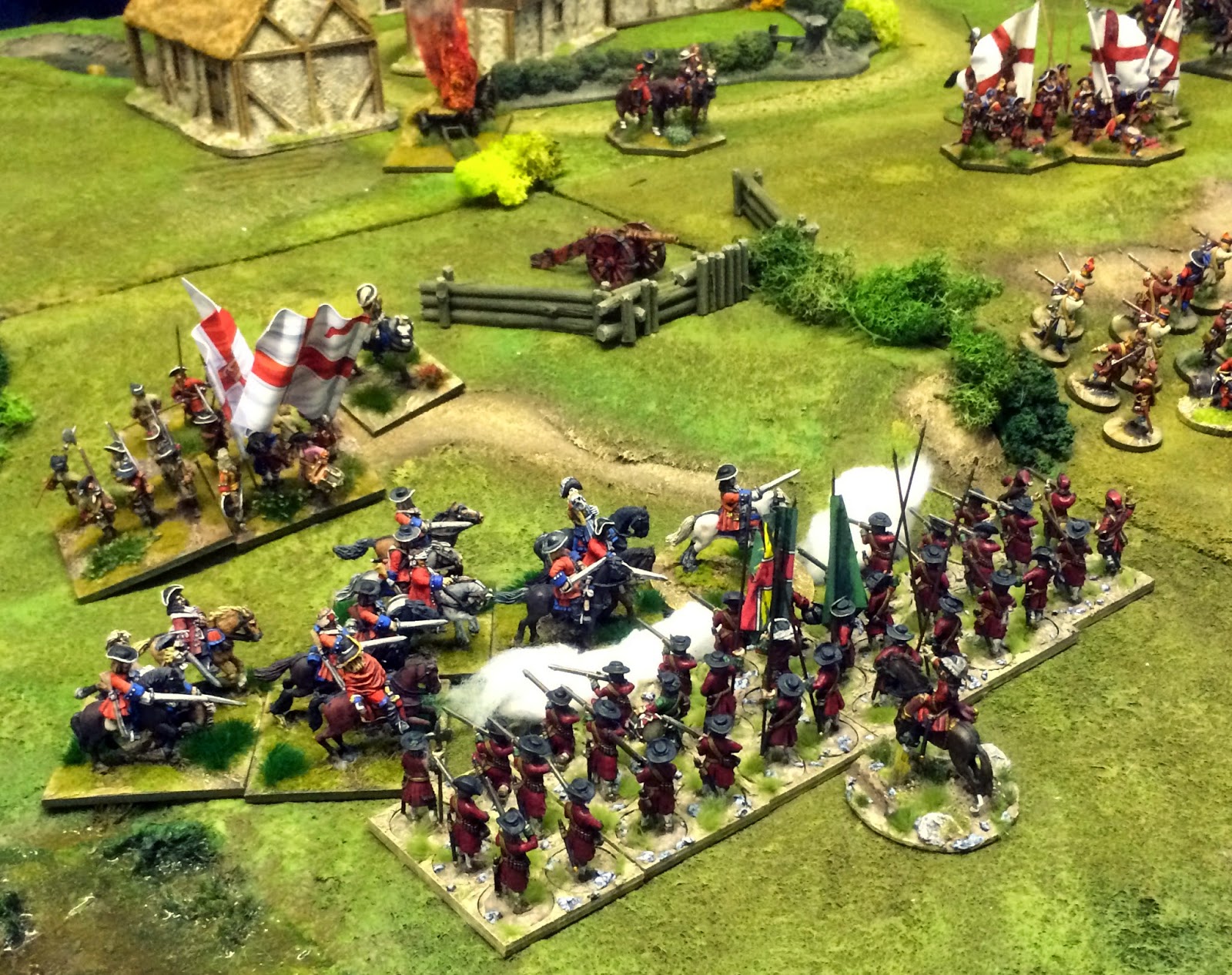 Unlike BLB units are not all the same size and can vary in size from small detachments of 6 figures up to full battalions of 60 figures. If you want, the important characters such as ensigns, sergeants, drummers and heroes can either be included in the unit or I prefer to have them take their place out in front of their battalions as they would be historically. I like the fact that those special characters actually play an essential part in the performance of their unit rather than just as eye candy in other rule sets. Another decision you need to make before the battle starts is do you want to fix bayonets at the beginning or wait for the opportune moment as troops cannot load whilst bayonets are fitted, even socket bayonets. Large units would also have their own grenadier detachments so you need to decide if you want to combine them into superior units of keep them to boost the effect of their parent unit. 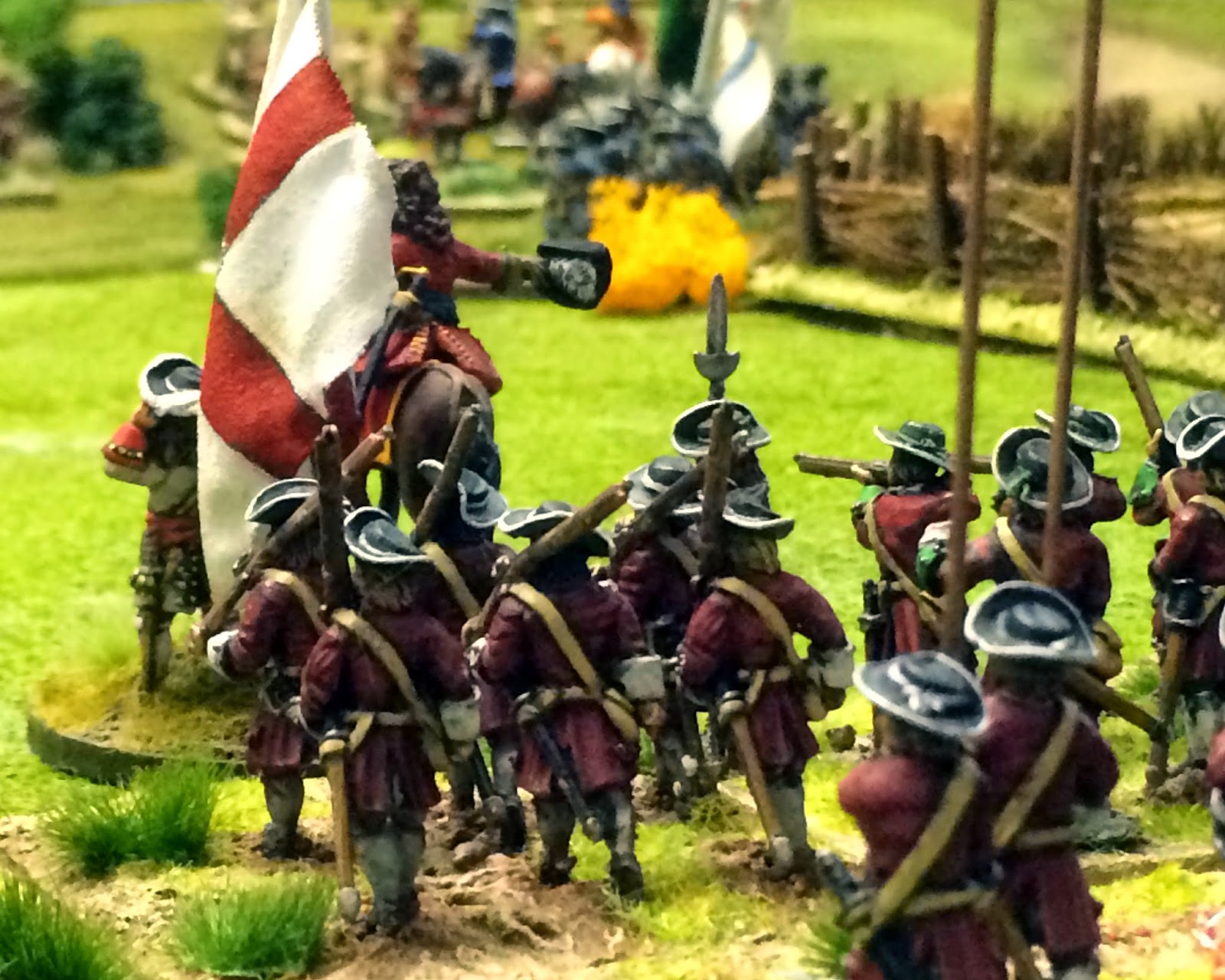 Even though neither of us had the full rules we quickly managed to pick up the main aspects after a couple of moves and the game quickly flowed along and had reached a decision after about 15 moves. A number of questions had arisen during the game about splitting up larger unit and a number of other points, all of which Barry had actually covered but had forgotten during the game - nothing new there then. 8-) Bob and I both enjoyed the game which flowed quickly and gave us some challenging decisions to make plus the card driven system and command decision added another level of excitement you don't get with BLB.

The first large battle had posted Williamites against Jacobites but for the other games we decided to reduce the size of the games to 4-5 units a side on a smaller table and tried various combinations of Danes, Swedes and Russians all of which gave fun fast games with the characters adding an extra element. Again all the games lasted for around 20 moves each but were over with decisive results in around two hours. 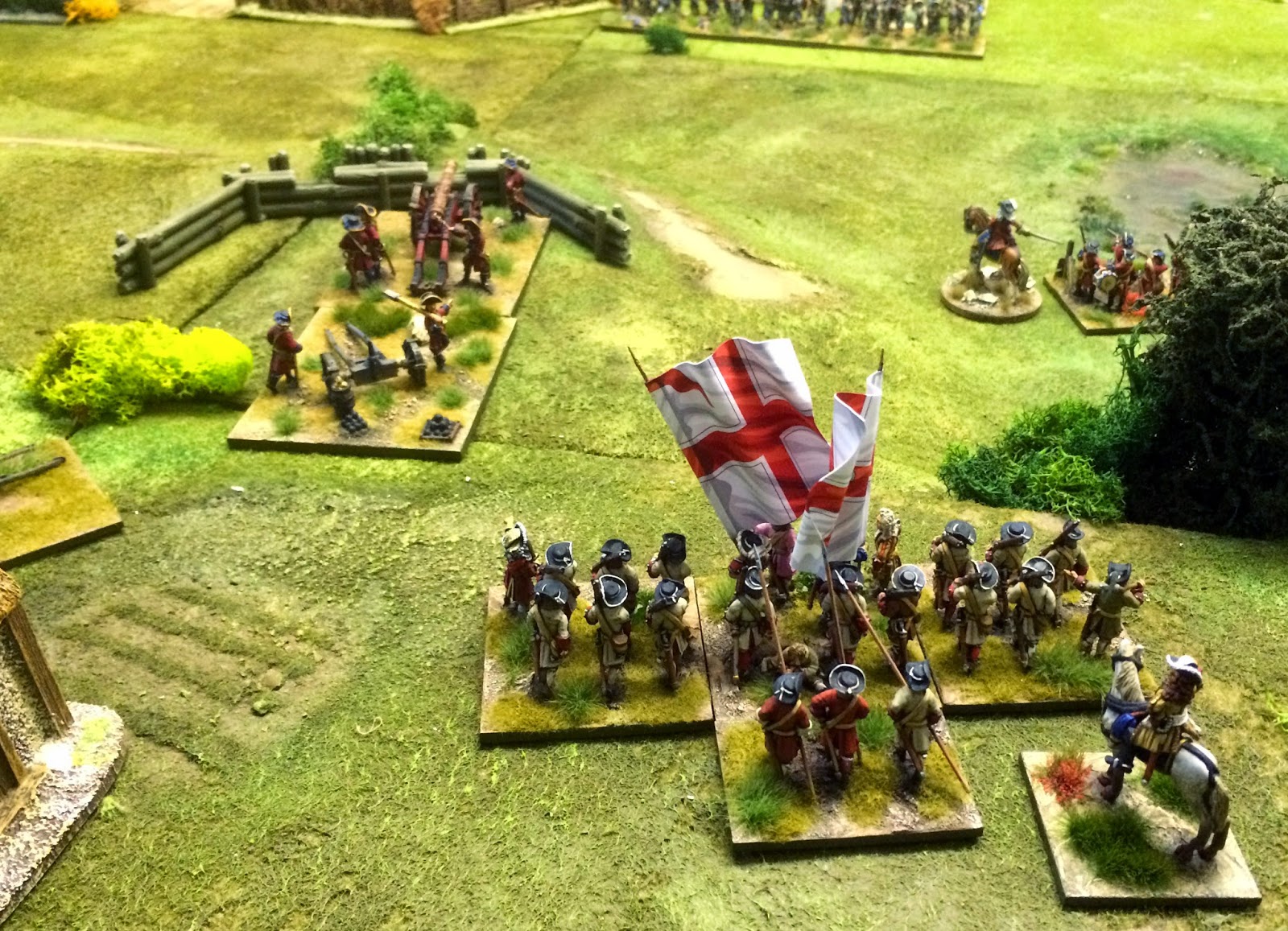 At the time of these playtests we hadn't added any extra bonus' for Swedish troops but decided to allow them slightly faster move rates and the ability for infantry to incline but so far no extra combat bonus.

My initial thoughts are that I loved the look of the games with the large and varying sized units. I loved the characters and card system which add an extra level of decision making to the game and also the ability to make a command decision to allow a unit once a move to act twice is a nice touch. The points system for units and characters needs some work on them to refine them a bit more as I feel some can be overly strong in their effect, especially the hero and we could do with getting the colonels and force commander a bit more involved in the action rather than just when a colonels card comes up but my overall impression of the rules is that they work extremely well for the small battles they are meant to represent and will work especially well for club night games where time can be limited.

By the time you read this review we will probably have played a number of other test games and we have already had feedback from the overseas testers so I can only see these rules going from strength to strength.
Share Share on Facebook Tweet Tweet on Twitter Pin it Pin on Pinterest
Back to The League of Augsburg