by Barry Hilton September 08, 2014
Having briefed Dave and Bob we took the plunge and got into the game. The new rules are card driven like Donnybrook for those familiar and Clarence's very popular English Civil War set Victory without Quarter.
As mentioned before, this test game is double the normal size of game but we wanted to give a good road test to some of the mechanisms.

Card driven wargames are unpredictable and because we were working with battalions and regiments, the decisions made by each player were fairly significant. Both players were very cautious. Bob as the Jacobites moved almost nothing in the first few turns apart from bringing the dragoon detachment out of its left wing redoubt and down towards the enemy. After an initial move their card did not show up for about 4 turns and so they were stuck in the middle of a cornfield!

Dave moved off with Regiment Funen who were quickly under fire from the Jacobite field gun, Dongan's Dragoons and then the advancing infantry regiment of De Burgh. The Danes reeled from the casualties but held their nerve and advanced into the teeth of the fire.

Bob moved his Guards from the village, an understandable decision which supported his forward defence strategy. It ultimately proved to be the Jacobites undoing but that could not be predicted within the first 10 moves. 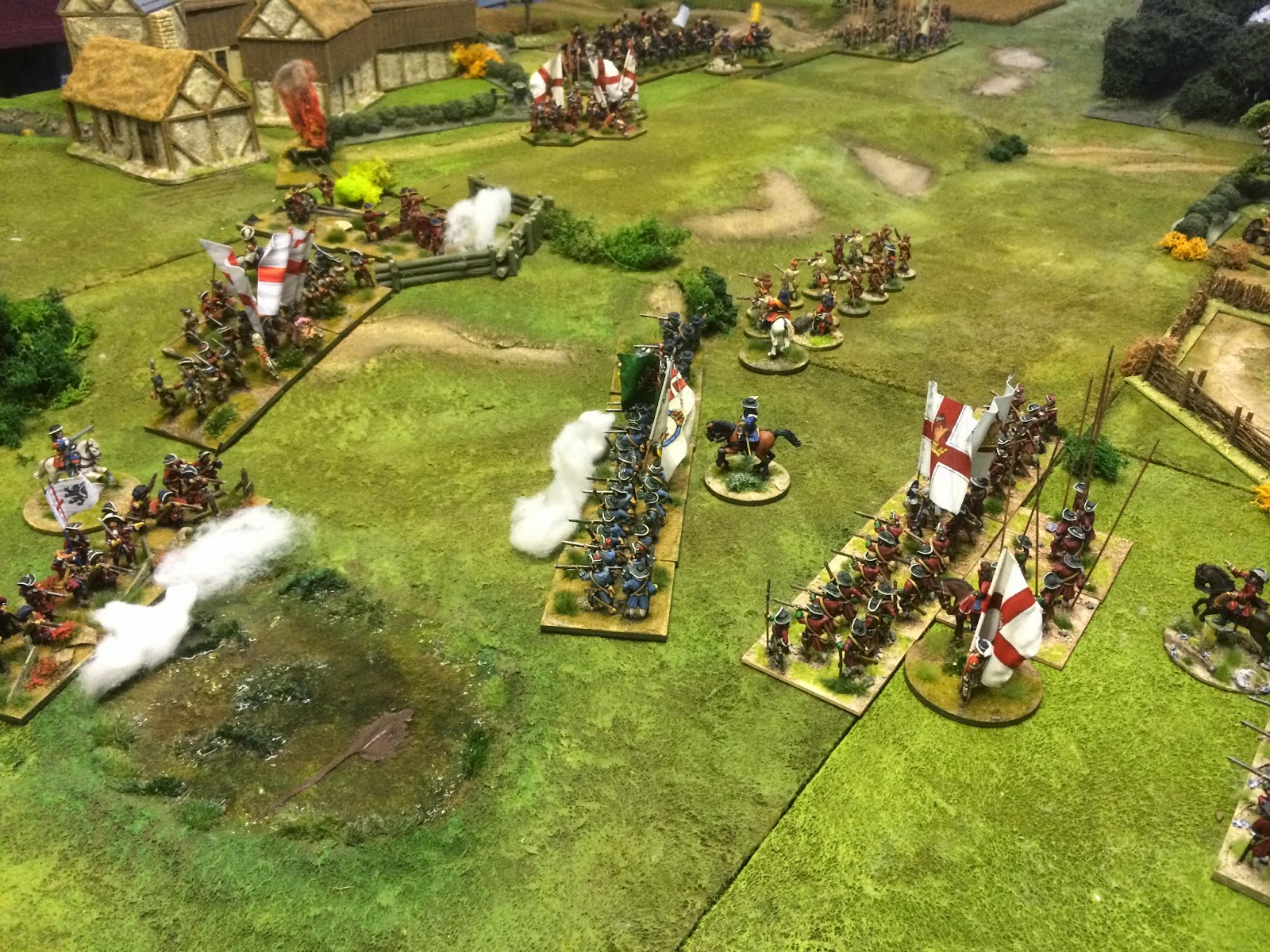 In the shot above the Jacobite Foot Guards are out of the village and the Williamite grenadiers are advancing with Funen to storm the gun position. They did this successfully.


They were ultimately forced to retire when Funen, having been cut up by heavy fire were charged by De Burgh's Regiment and broken in melee with about 35% casualties.By Turn 8 Dave's Williamites looked beaten.

I have adopted the character system from The March of Eagles for the new rules. We soon found out that having a significant number of characters per unit helps very much with morale!

To add period flavour orders chosen from the list can be very specific such as 'Fix Bayonets!' 'Remove Bayonets!'and 'Form Defence against Horse!'. Bayonets have become fairly significant under the rules as they obviously prevent firing.

The use of  RELOAD and END OF TURN cards makes each turn very unpredictable. On several occasions each player was stymied from a killer action by the untimely arrival of the EoT card!

In the second part of the play test description we'll have a look at the result and focus on some of the other mechanisms of the rules.