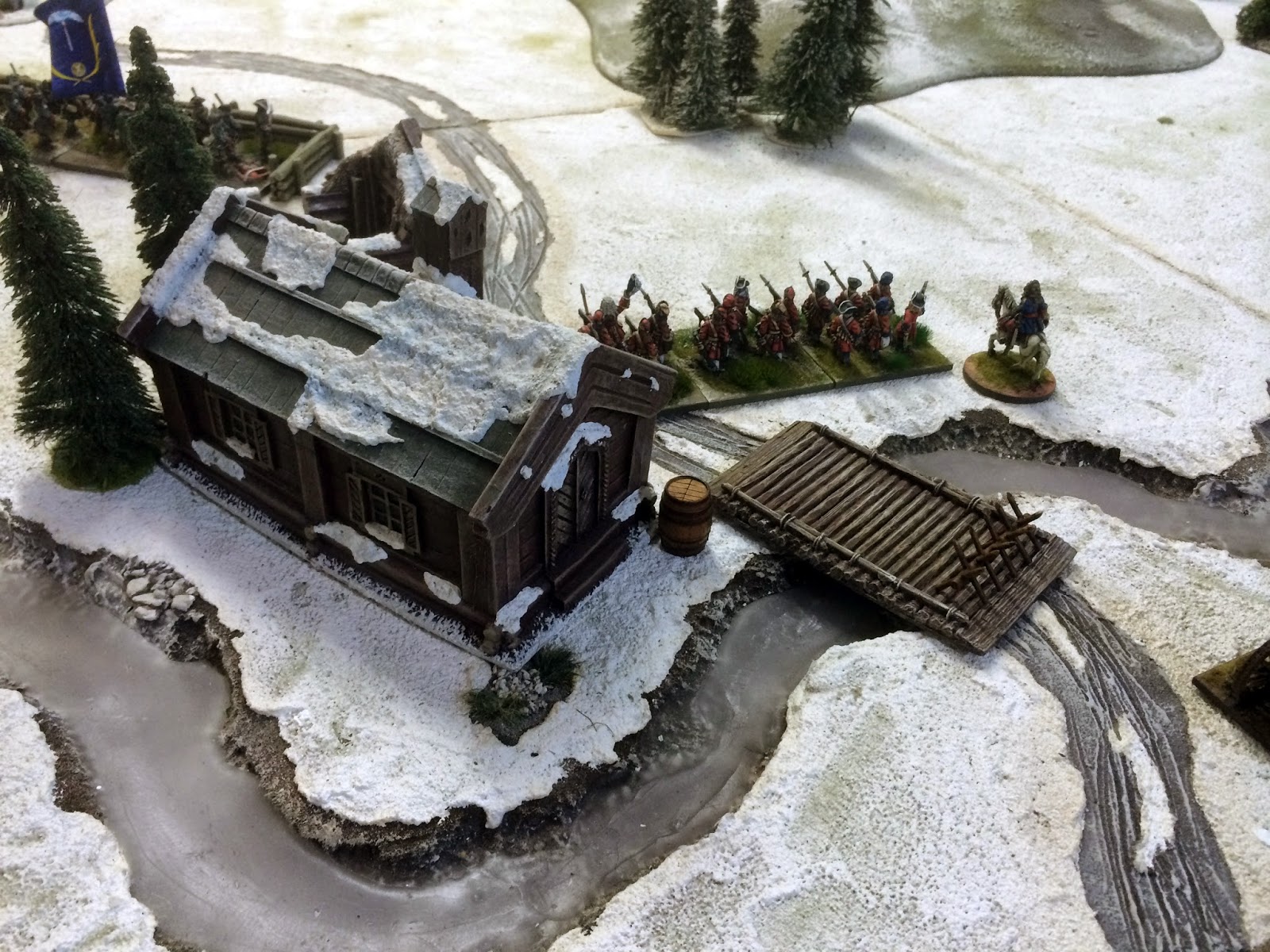 David Obrien - Following on from the much larger Irish game which Barry has started serialising we turned our attention to fighting small actions with only 4 or 5 units per side and also trying out some different armies. We had the pleasure of using the fantastic scenery produced by Whitehouse and Trickett many years back which stands the test of time well and which we then ended up using for our display game at Partizan.


The first smaller test game involved Swedes versus Russians and again Barry will probably post a number of articles about each game so I won't go into the actual action but pick out a number of points that interested me. The first thing that struck me about this game compared to the Irish one was that all the units were standard BLB sized and gave just as much fun as the game with the larger units. 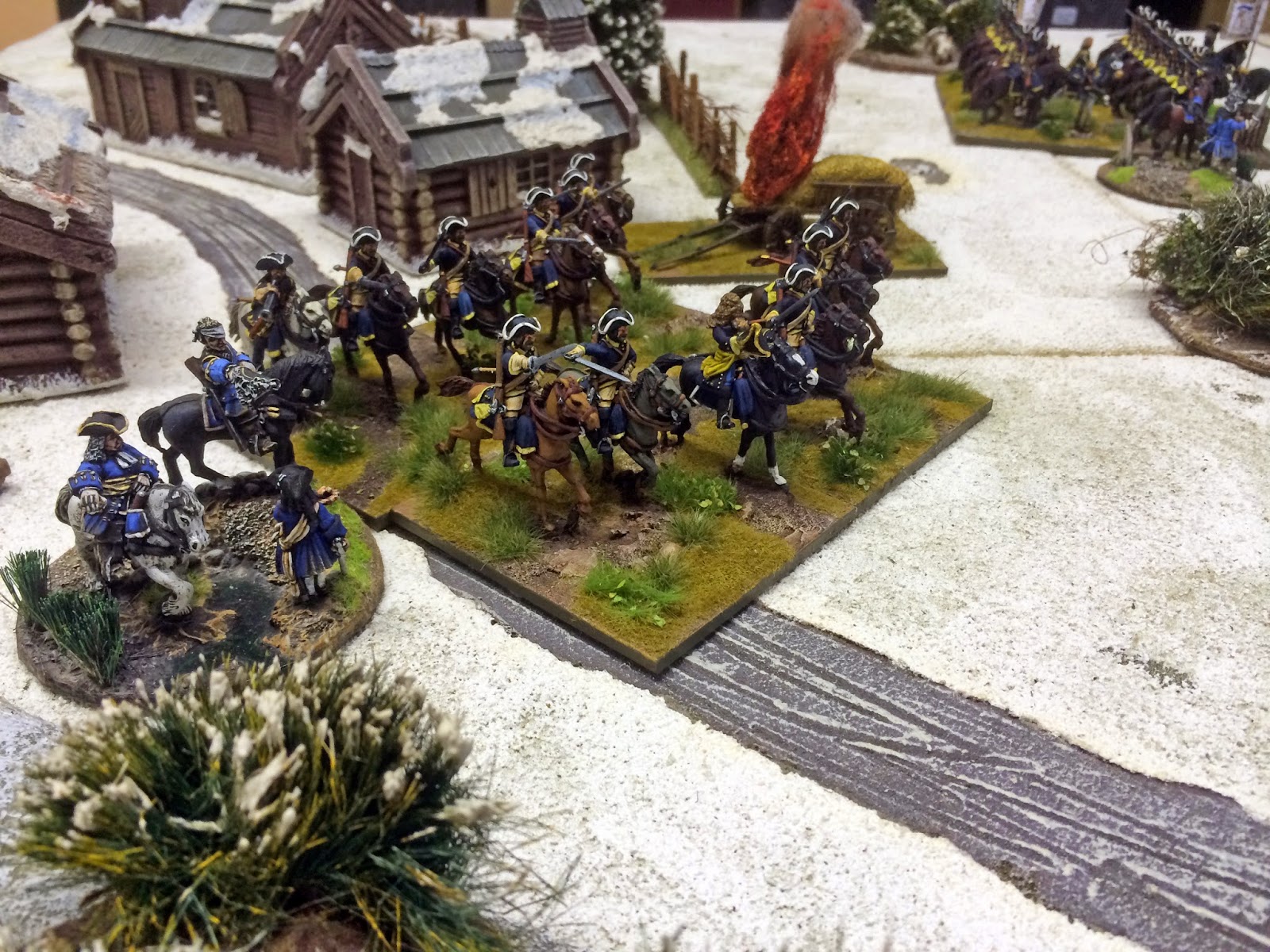 We just took it for granted that all the characters such as ensigns, sergeants, drummers etc were mixed in with the units and when they became casualties they were just scored off the roster sheet.

At this point in the playtesting we hadn't added any special rules to differentiate the Swedish tactics but eventually decided to give them a slightly increased movement allowance and also the ability to incline. There was no difference in points costs between Swedes and other armies at this point but since then Barry has worked out a multiplier.

For quick fun games in a club night the difference in points costs will help to balance the game but in reality you often found that better led and commanded troops could often manage to get more of their troops to the battlefield quicker than their opponents so I would suggest trying a few games like that some time but give the Swedes much harder objectives to get a win. 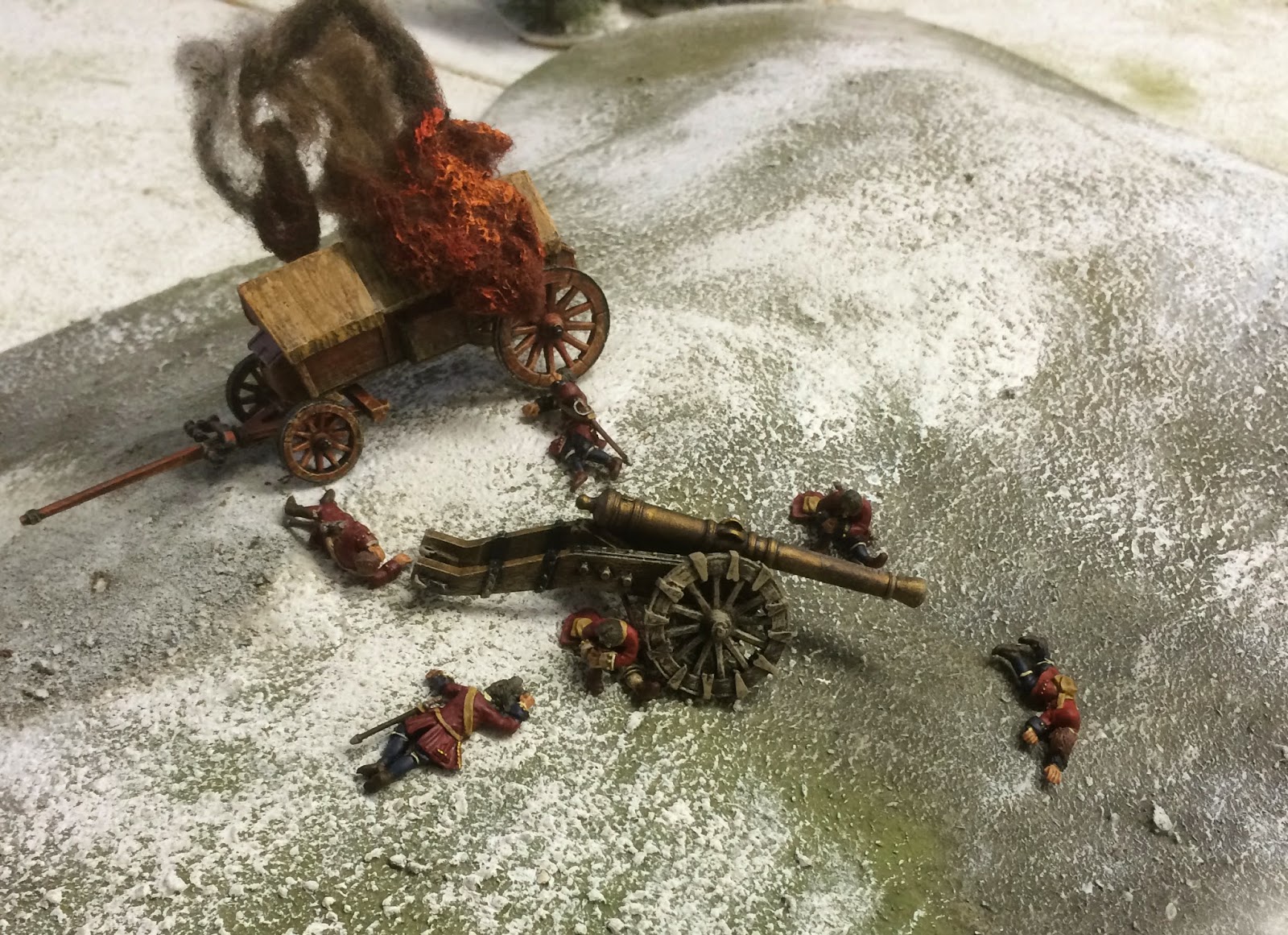 I have never used a points count for my own Blood and Iron rules which are written for mid 19th century combat as this would have ended up with smaller better trained Prussian units facing poorer quality Austrian or French units which is the exact opposite of what generally happened. But that's just my own personal view of points counts.

The second game involved Swedes against Danes, the Swedes were still at BLB size whereas we tried a few larger units for the Danes, especially the Danish Guards who were a nightmare to deal with but eventually the Swedes prevailed mainly due to a couple of lucky moves where the cards seemed to land in my favour. Again the rules worked really well especially the part about deciding about when to fix bayonets, we decided that all Swedish units would start the battle with fixed bayonets so there what little shooting from them just getting stuck in with cold steel. The battle ended up a Swedish victory but certainly a pyrrhic one as there were very few troops left on the table. 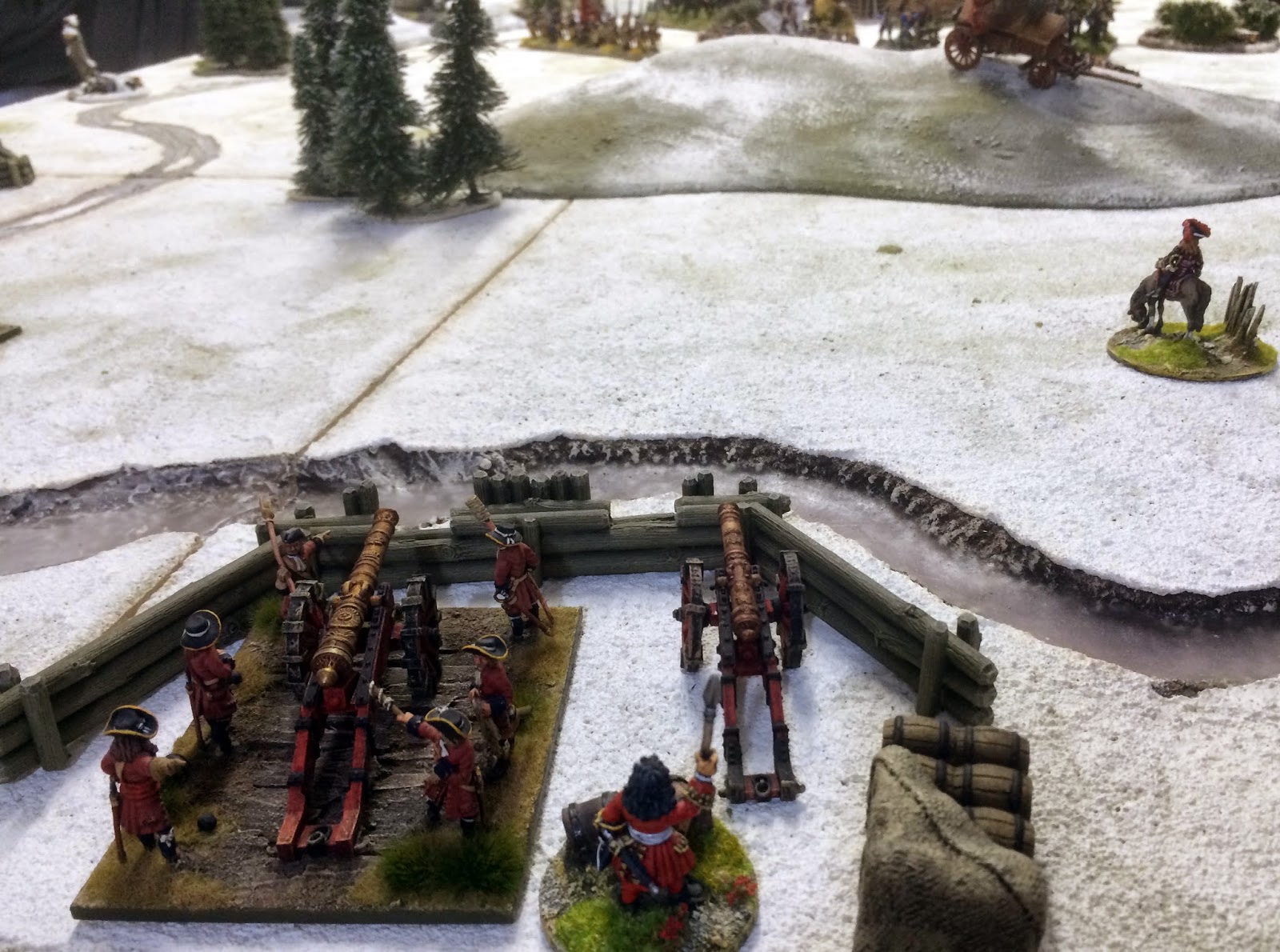 Bob had to leave for the third game so Barry decided to play the Danes and I took the Swedes again.
Unfortunately the run of cards didn't work well for me and both my flanking units of cavalry were quickly routed but this was before we had added in rules for counter charging so the outcome might not have been so extreme. With both flanks gone it was down to the infantry with pike and bayonet and I thought I had Barry at a disadvantage at one point but the card gods let me down as the Danish Guards managed to pour in a devastating point blank fire as I charged them and my other unit wasn't doing much better and with reforming Danish cavalry  on both flanks the remaining troops called it a day. 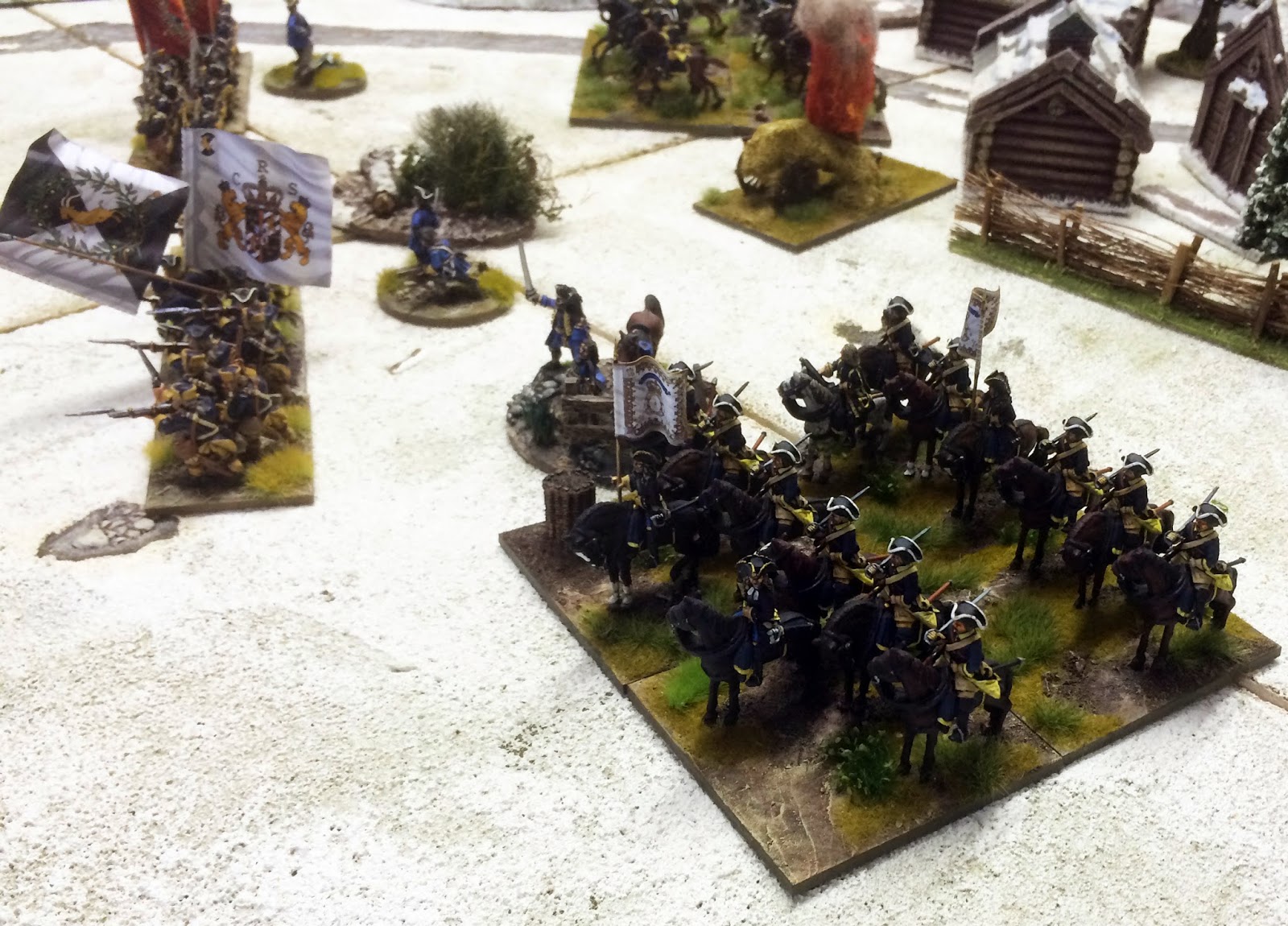 The three games were terrific and gave completely different results and allowed us to see different ways of modifying the rules that can only come with playtesting.  We fought three games each of which lasted around 20 moves over about a seven hour period which also included coffee breaks, a meal and resetting the terrain each time which just shows how well the rules seemed to be working.

There have been further modifications to the rules especially to the Swedes at the moment but these have still to be playtested just to make sure we haven't made them over powerful. 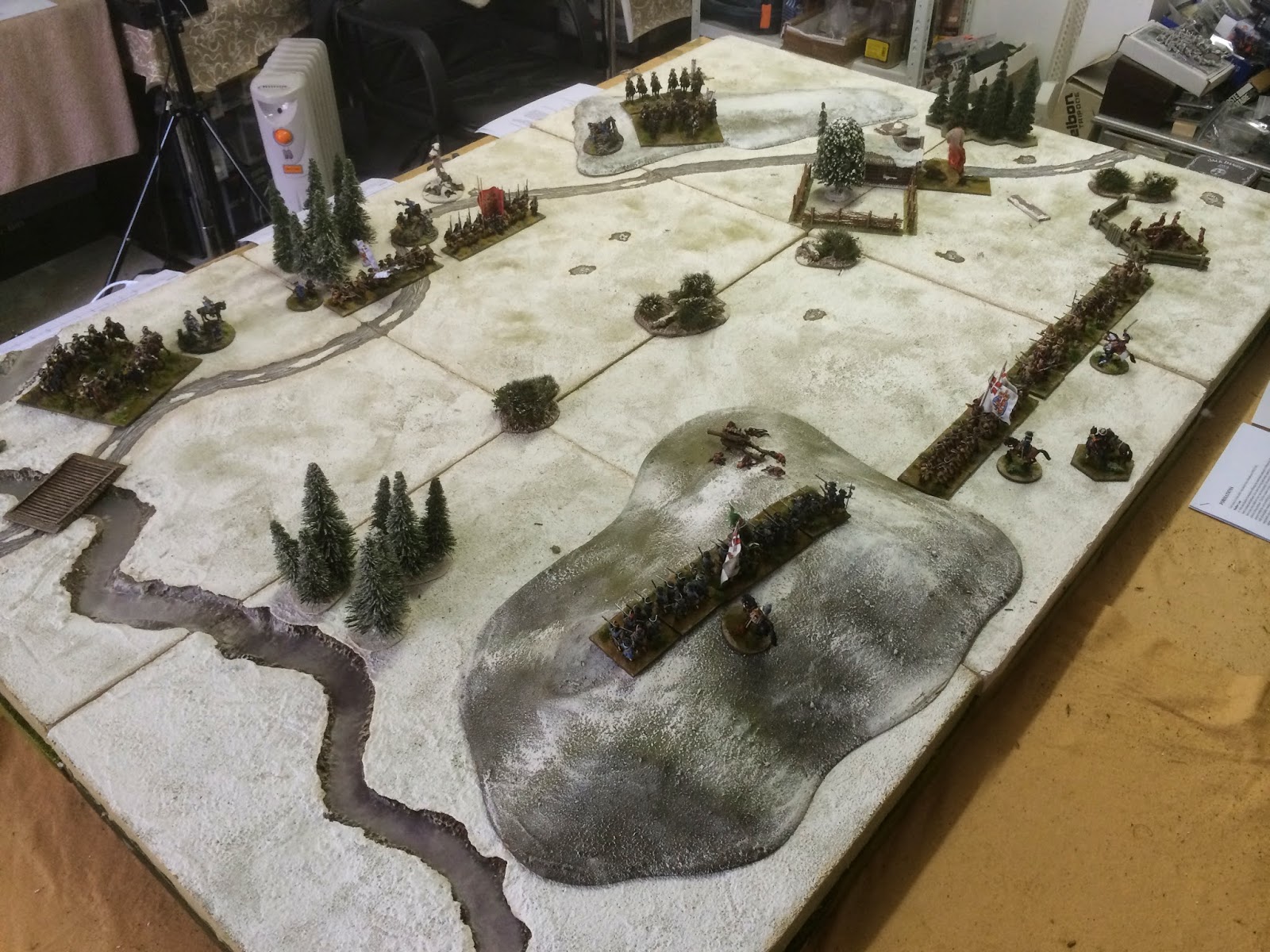 The display game that Barry, Gerry and myself put on at Paritzan also faced Swedes against Danes on the snowy terrain but this time during the earlier Skane wars so the Swedes never had the benefit of their special rules. This was Gerry's first try of the rules and he seemed to pick them up very quickly and the display and the rules generated a large amount of interest.
Share Share on Facebook Tweet Tweet on Twitter Pin it Pin on Pinterest
Back to The League of Augsburg