One man's story.. Building the Saxon Army for the Great Northern War Part 2

by Barry Hilton November 13, 2013
Günter Heim - The next step in building forces for Beneath the Lily Banners for me was to decide which miniatures I was going to use... It was about this time that Barry Hilton started his own range by introducing the famous Warfare Miniatures! I was almost immediately taken by their look and started to compare the miniatures with the drawings in Dan's notes. So I found my suitable figures after some time and I decided to built the Saxon Army at the outbreak of the conflict. I was able to use the figures already available in the range with no significant gaps.

The last straw was my attendance at the League of Augsburg Derby Game in October 2012. After this great weekend I made up my mind and forced the issue so to speak! I contacted my long time painter and friend Neil Wilson and asked him if he would like to paint my Saxons. He jumped on the matter with eagerness as he already is painter in chief for my Napoleonic Saxons. 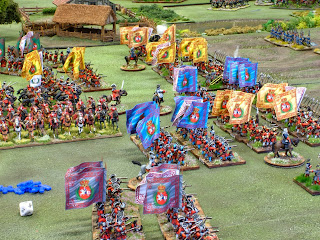 We agreed on a kind of power-painting style for the GNW period army by doing it in the shortest possible time which so far seems to have work perfectly. I ordered a lot of battalion packs from Warfare Miniatures well in advance of this agreement and Barry took the effort on himself to handpick the figures for each pack. I instructed Neil to use the uniform details provided by Dan Schorr's Notes on the Saxon Army to paint the battalions. As he was a very busy bee one or two details evaded his attention but they were not so serious as to do any damage in terms of accuracy.
Whilst this activity was running I started to think about the flags I would use. I searched the I-Net using clues from Dan's notes and found a website named  Historischer Bilderdienst
which provided me with some pictures and also with digitized images of a book called "Hottenroth:

Sächsische Fahnen und Standarten". Within this superb book I found information's about  no less than 19 different styles of Saxon Flags of the GNW, all of them drawn by the hand of the Elector of Saxony and Polish King Augustus II  also known as August the Strong.

After posting again on the Fighting talk I got more and more information's about those flags such as a link to the Swedish Army Museum and its vast collection of the War Prize of these days. Many Members provided me with insights and knowledge that lead me to the Flagg style I wanted to have.
Now the main problem was to find a company to provide me with the flags I was looking for. My first choice was The Flag Dude who supplied my Napoleonic Saxon Flags. At least four more companies were thoroughly searched but with no results.
Then my eye fell upon the range of Flags by Quindia Studios aka Clarence Harrison and closely associated with Warfare Miniatures. I started to talk to both Clarence and Barry about the possibility of commissioning Saxon flags.
I was heard but had to wait until current running projects were finished. The discussions lasted several months until I thought I must spur them a bit. So I endeavoured to encourage Clarence by offering a reason to look into the matter. You can see the results in the accompanying images.
In the final part Günter will offer more information on the journey and many photos of his Saxon Army in action.