One man's story.. Building the Saxon Army for the Great Northern War Part 3

Günter Heim - What Clarence achieved within a few weeks of labour on the Saxon flags stunned me and can now be seen in the Shop now. With his help and by his requests for further information we discovered certain details which I missed in my research. 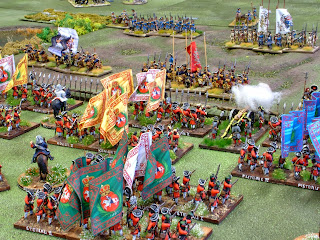 So, after the figures and flags have been in the process of being painted and created I could now focus on what time frame I wanted to cover with this army. The most obvious one was to use the style of the Warfare Miniatures to do the trick. The broad brimmed hats gave me the clue that the early stages of the creation of the Saxon standing army until the introduction of the tricorne hat would decide the time frame, the Years 1680 to 1706. 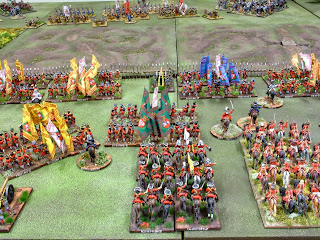 The army which I had in mind had to be in its full strength as I am no fan of having only a portion at hand so I searched for a Order of Battle that would suit me. I found it on the website of the DiGaM- 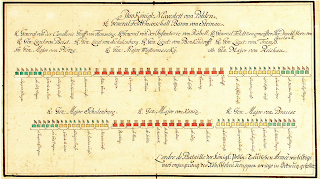 This order of battle would gave me the opportunity to play battles from the Siege of Vienna (1683) over the Reich's-Krieg of the Holy Roman Empire against France as well as the involvement of Saxon troops in the Wars against the Turks in Hungary and Serbia. In the Great Northern War in Poland starting with the Siege of Düna and Riga in 1700, Damm, Krakau, Pintschow in 1702, Posen and Punitz 1704 over to Fraustadt  and Kalisch in 1706. 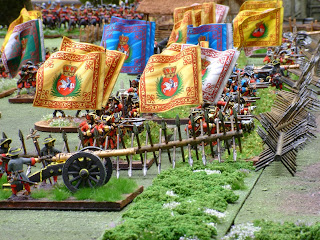 So the jouney is not yet complete. I have dragoons and further regiments to add but my beloved Saxons earned their spurs in Derby between 12-13 October 2013. They fought four battles over the two days, or to be more accurate the fought the same battle four times with different commanders each time! Barry had prepared a scaled down version of the Battle of Klissow 1702. I transported my Saxons over 2,000 miles round trip by car from Vienna to Derby to take the field of honour against the northern barbarians in blue! 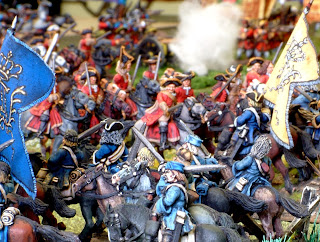 I commanded the Saxons  with Adam Hayes against Colin Napier in the first battle. General's Gerry Donohoe and Les Rumble won a famous victory over the Swedes in the second battle by defeating the relentless attacks of brave Bill Robertson. In the thirs great struggle Alan Cuggy's Swedes were stopped dead by my skilled commanders Paul Allen and Marcel Hurst and finally, I once more took the field in the final struggle against Paul Patrick. 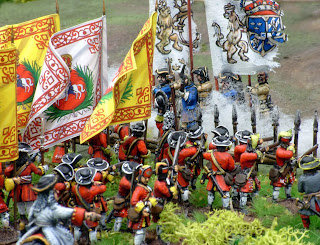 My boys returned home with the colours of the 2nd Battalion Swedish Lifeguard regiment lifted from the bloody piles of dead before my barricades. The honour went to 1st Battalion Regiment Pistoris. My cuirassiers also captured Swedish cavalry standards and on one memorable occasion destroyed the legendary Drabant Guard of Karl XII himself. 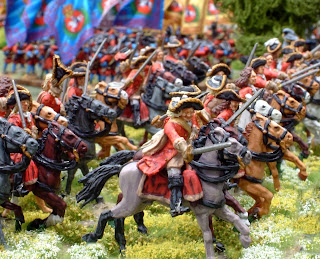