One to one wargaming: A visual study in British company deployment 1685-1698


I have been planning this particular post for about three years. Why has it taken so long? I needed to get a run at it. I am fascinated by the compromises necessary in wargaming particularly in relation to scales. Vertical scale distortion, ground scale distortion and finally the challenges in representing the depth of formations relative to their width. This last one has always bothered me, especially when battalions were capable of expanding and contracting their frontage and, when the norm seemed to alter from six deep to three deep lines.


In order to experiment I needed to paint a full company one to one so that I could model the different formations without compromise. I chose a typical British company of the 1680-1698 period. This could be English, Scots, Irish or Welsh. I also chose to model it with a ratio of four muskets to one pike. In between other demanding projects I painted, in a very basic format:

I based these individually on pennies (Queen's head preserved!) and used sabot rectangles with no distinction between the distances between pikemen and musketeers.

The models used are all Warfare Miniatures and they are painted in a white under coat with flat colours over washed with soft tone from Army Painter. The varnish is matt and applied by hand. Basic I know but effective en masse and ideal for this experiment.

I batch painted over many months and varied the tone of the reds on the coats with each batch and then mixed these up across the sabots in order to get a muted and smooth blend of British brick red.

I chose for the purposes of these pictures to represent the oldest regiment of the line - later to be known as the 1st of Foot, The Royal Scots but in this period known as Dumbarton's under James II and Orkney's under William III.

I have photographed it in three configurations - six deep, four deep and three deep. I am certain wargamers will be interested in the huge change in the appearance of the company when in these different depths.

The visual impact is remarkable as the depth and width varies leading to many questions around command and control, fire effectiveness, ability to withstand enemy pressure and psychology of security for the soldiers themselves. 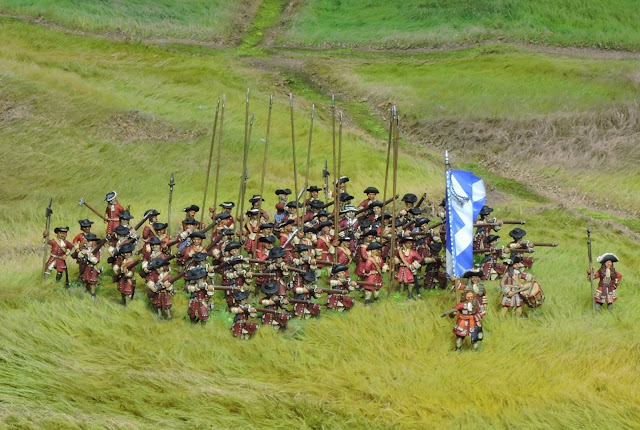 Six deep. This box like formation was standard for the period. It was probably used at Sedgemoor and in Ireland. The French continued to use it long after the British and Dutch began to adopt the thinner, wider line.

Four deep. In this formation I have all the super numaries outside of the company mass. Captain, Ensign, Drummer to the fore, Lieutenant to the rear, sergeants and corporals distributed as file-closers and straggler catchers.

Three deep. The formation is getting long and unwieldy. Bearing in mind British battalions could theoretically have deployed twelve full companies in this formation with the pikes massed centrally for all companies and the thirteenth company - the grenadiers, either detached and on the right or, split and on both flanks, or out front somewhere.

On to the separation of the pikemen from the musketeers. The three shots below show the musketeers forward and the pikes to the rear. Quite a contrast with the six deep looking very box like and the three deep having the appearance of a traditional line.


And finally, marching columns. Several sources exist describing battalions marching six files wide as in the top picture however, in Ireland some of the causeys across bogs were so narrow that men had to pass three wide and sometimes two wide. Imagine a battalion of six hundred men having to thread three or two wide through a narrow log pass across deep bogs which may have been several hundred yards wide. The deployment challenges so irritating to wargamers desperate to get their battalions into action need some serious consideration.