One to one wargaming: expanding the idea

I was very pleased that the first post on this subject was popular and that visitors were stimulated to consider the implications of frontages, deployment, fire methodologies and movement around the battlefield and its table top imitation.


To continue, I thought it might be useful to reflect on what we are currently using as tabletop representations and the suspension of disbelief necessary to imagine it can be in any way realistic.

It calls to mind innumerable conversations over the years revolving around what I call 'nippy battalion syndrome'. That is, where gamers attempt to squeeze formations of 28mm models through gaps in their lines barely 25mm wide in order to replace worn battalions with fresh ones.

Or, those tedious discussions around.. "why does it take a full turn or even two turns to deploy out of march column?" and, "Why can't my battalion shoot over the crest of the hill?"  I guess you have heard a lot of those too.

Gamers are eponymous and primarily, wargaming is no more than a large board game. The collective tacit acceptance is that too much reality gets in the way. We are interested (but only to an extent) in how long it takes a man to walk a mile, how heavy a musket is or whether someone on a horse can see over a hedge 20 metres away.

Any deeper level of analysis pushes us into the domain of the re- enactor, amateur historian or researcher. Of course many of us have stakes in several of these camps which makes a commentary piece like this relevant and not just random sniping from the roof tops. I enjoy rolling high just as much as anyone and winning is a great feeling but sometimes competitive edge nudges logic off the road.

I was once told during a FoW game that the rules were w***. A T34 will always take out a Tiger at that distance and angle (side shot at three inches range). The naked upturned Subbuteo pitch was of course, a highly accurate representation of Byelorussian countryside. I stopped playing with this very nice gaming system at that point.


The real interest in wargaming for many, like sport or theatre, is in the drama - how many sixes were rolled, how many routs did I cause? what were your casualties when compared to mine? Who won?


I think the frustration created by not being able to get your tiny troops to do everything you want them to is the difference between Mel Gibson history and reality.
If Monmouth's Army had been a little quieter and a bit quicker, would it have routed Feversham at Sedgemoor? What if King James had not sent 80% of his troops towards Slane Bridge and had contested the Oldbridge crossing with all of his infantry? If only King William had been quicker getting his Dutch battalions into action at Steinkirke. Each of these situations can be directly related to the problems created by lots of relatively untrained men, amateur commanders, poorly understood terrain, unwieldy formations, weather and time. None of these famous historical figures rolled 100% movement allowance, had a private helicopter or a hot line to God (although at least two thought they did!). Hence,  the first lost his head, the second a kingdom and the third mostly failed on the battlefield, being more successful on the political champ de bataille.

The dangerously seductive thing about wargaming is that our eyes and brain begin to believe that what we see on the tabletop is real. We then calibrate our expectations on this alternative reality and true life insurmountable challenges become abstract problems predicated around neatly based toys soldiers on a terrain mat. Is a bit like kids being so far removed from food production that they cannot connect a cow in a field with a burger in a bun.

If anything, the cavalry pictures above and below are even more dramatic than those of the infantry.
I managed to scrape together enough models to represent a single troop of Horse in 1:1. Circa 50 models. Note the frontage and the depth relative to the frontage. 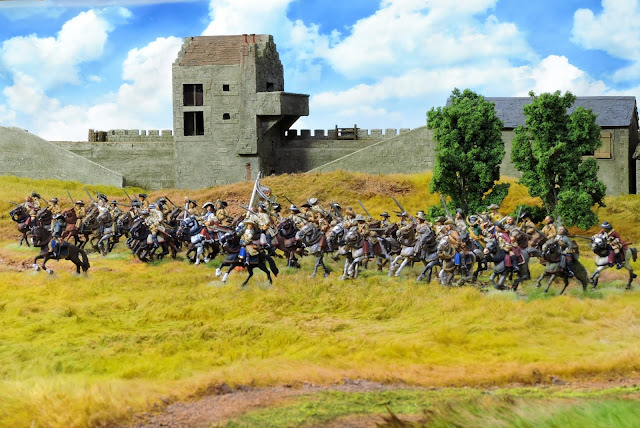 Now contrast that the formation below (not untypical for any set of Horse and Musket rules) which represents the above multiplied by a factor of two. A tabletop squadron of six models represents over 200 men or four times the size of the above. The  width to depth ratio is off the chart inaccurate, yet it looks nice so our eyes accept it. 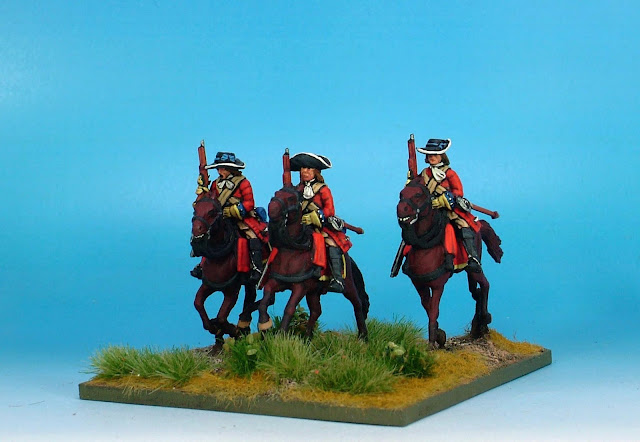 Of course, very practical considerations such as protecting the painting work invested by all of us in our minis compounds the depth issue by making the bases deeper so as to guard against chips and scrapes. My own over compensation for this had led to some of the mechanisms relating to deployment, change in formation and order transfer which occasionally rankle with some players.

I read with interest a lot of play testing reports about games, particularly in relation to the Horse and Musket era and much of the grumbling that comes from players is about what they are not allowed to do in order to win. Why can't troops move faster, why can't I incline units? Why must I turn around, move back and turn around once more instead of moving backwards?  Can I shuffle sideways? Why do orders take so long to change? why must we have a senior officer present to change orders? These are all gamer related issues - Why can't I get £1,000 for passing Go in Monopoly? That's just as valid a question. 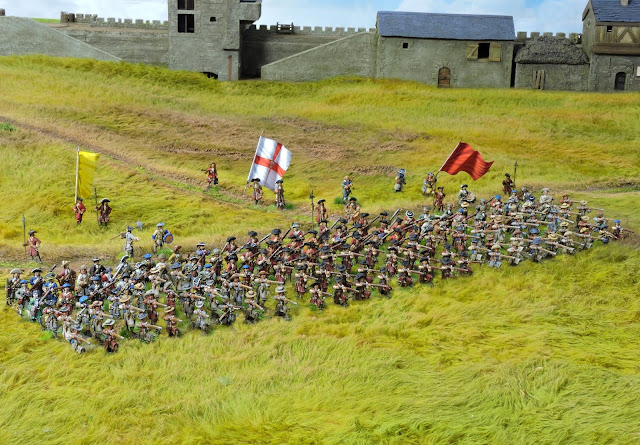 This final shot shows three 'all musket' companies representing a tiny fraction of the garrison of Derry in 1689. The citizen volunteers who made up the vast majority of the force had no military training. Pikes would have been relatively useless in the defence of a walled city and so, the companies varying in size from around 50 to well over 100 men would have looked much like this. How easy would it have been on a windy Ulster day for the man on the far left of the sixth rank to communicate with his brother who in the blue bonnet on the far right of the first rank?