by Barry Hilton September 18, 2013
Barry Hilton - The territories in grew in importance to over the time between first being claimed by Cartier in 1534 and the early 1620s. During this period several efforts to colonize foundered but ever increasing demands for furs from thrust the difficult outpost to prominence as a gateway to potential riches for whoever owned it. Repeated attempts at settlement gradually made inroads and by the early 17th century stone fortifications were in place and the fundamentals of military and economic permanency established around what was by then being called Quebec.  It was temporarily lost by Champlain to English privateers in 1629 but returned through treaty to the French in 1632. The French were easily the most active Europeans in North America during the 16th and 17th centuries exploring and ‘claiming’ vast swathes of   land the size of with less than 500 native Frenchmen insitu. There is nothing like ambition! Other Europeans were not idle during this period but the Swedes, Dutch and English had restricted their efforts to the north eastern seaboard. A process of consolidation took place between the 1630s and the 1670s with the English by far being the most energetic and it seems, prolific of the three other powers. The Dutch eclipsed the Swedes and the English the Dutch. Having been in North America in one form or another since the 1530s the French had managed to amass about 14,000 settlers by 1688 whilst the English starting almost 100 years later had accrued  a truly mind boggling 250,000 by the same date!

English awareness of French empire building coupled with a jealousy regarding the volume of trade riches the French were ripping out of the interior fuelled hostility in the main English colonies of and . Perfidious Albion (at it even then) persuaded the Iroquois to conduct brutal raids around the much smaller French settlement of Montreal and war was declared in 1689 in parallel with the events in Europe. The Iroquois’ savagery so appaulled the French that vengeance had to be exacted on the real villains; The English. All of this activity coincided with the arrival in Canada of  Le Comte Frontenac for his second term as Governor General. Frontenac was a big man in all senses of the word. He was noble and of ancient lineage, an accomplished soldier, haughty in temperament but brave and symbolic of the kind of remarkable men who would carve out empires in a wilderness. He immediately sought the counsel of his professional officer corps and efficiently organised revenge on ’s traditional enemy.
In early 1690 three expertly planned raids were successfully undertaken. ,(modern ) was hit  in January, , (modern ) in March and Sasco, (modern ) in May. Each attack was noteworthy for its thoroughness and brutality. The French military has assembled mixed forces of French professional soldiers, volunteer militiamen and Indian allies led by Canadian officers. The three separate raiding forces operated in the ‘Canadian style’ a mixed form of warfare incorporating Indian wood craft with European discipline. Characteristics of this style were stealth, surprise, ambush and savagery on contact in other words a sort of 17th century Shock and Awe. 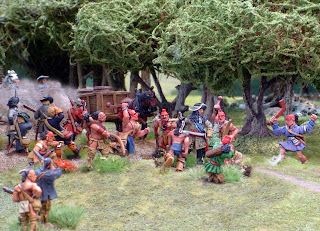 This was all too much for the New Englanders. Something had to be done. Money was raised entirely by the colony of via a paper bond scheme funded in futures those being, the booty that would be liberated from the enemy when fell. The expedition would travel by sea and the objective would be the destruction or capture or surrender or all of these, of French Canada. The obvious leader of the venture was the famous or some might say notorious Sir William Phips, a native of who had initially made his name as a privateer in the . He salvaged treasure from wrecked Spanish galleons amongst other things and had recently taken the surrender of the French colonies in at that time known as . The deported inhabitants ended up in as the ancestors of the Acadians or Cajuns without a shot being fired! His reputation was stellar although his military credentials were perhaps suspect but as we all know when the bandwagon starts to roll it’s a brave mad who’ll stand in the way. So, Phips got the job and the planning began in earnest.
For those of you like me interested in King William III’s European wars against Louis XIV, all of the above was going on around the time of the siege of Derry and the preparations for the of the . Requests for regular troops from were flatly turned down by William who cited the far more significant (well it was for him as he might get booted out of and lose the throne) threat posed by James II’s Jacobite Army in . The colonists had to go it alone, a portent of thing to come. Consequently Phips land contingent was formed from 2,300 colonists organised into seven battalions named for their commanding majors; Quincy, Phillips, Hutchinson, Henchman, Appleton, Gedney and Saltonstall. All of these men were volunteers or drafted militia and in the main were from the colony. A few companies came from and the Plymouth Plantation which at that time was not part of . Six brass cannon manned by the Honourable Artillery of Boston accompanied the Foot. A small contingent of Indian scouts under Lt Thomas Swift was attached aping the French use of Native Americans. Overall command of the army was given to Lt General (Parkman cites Major) John Walley of . It is understood that the training and operating practices of the New Englanders was modeled on the Trained Bande principle and they would have therefore behaved in the same fashion as contemporary European infantry. This was in complete contrast to the tactics already demonstrated by the French during their raids of early 1690.
Phip’s fleet of thirty four ships left on August 19th which is late to begin a campaign in this period and theatre. His flag was carried by a 44 gunner the Six Friends. Including sailors the entire expedition comprised somewhere around 3,500 men, the largest military foray in North American history until the middle of the 18thcentury. Without maps it took the New Englanders till October 16thto reach . Phip’s first act upon arrival was to deliver a missive to the garrison demanding surrender within the hour! This impudence from English pirates so enraged Frontenac that he is said to have uttered the immortal and rather splendid “I will answer him (Phips) through the mouth of my cannons!” (par la bouche de mes canons) 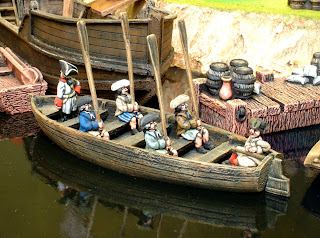 This unexpected retort fazed the New Englanders who resorted to an ineffectual naval bombardment for a couple of days whilst they tried to work out what to do. Storming this natural fortress, reinforced with excellent military engineering was not part of the original plan hatched in . contained a formidable garrison of 900 colonial regulars (Compagnies Franches de la Marine). These men, under Navy control were trained not only in the European style but are also thought to have been organised into field battalions for offensive tactics in the Canadian terrain. A small castle guard and Governor’s bodyguard combined, provided a further 50 regulars. To supplement this excellent core 1,100 Canadian militia were also present. These men did not operate in the style of their adversaries but when mustered spent their time on shooting practice and woodland warfare tactics in the style of the Native Americans they lived beside. With perhaps 100 Indian allies present the French force totalled some 2,000- 2,200 men.

Faced with extremely limited options Phip’s chose to put 1,200 men ashore on 18thOctober in an attempt to come upon the city from the landward side. The north eastern approach had been identified as the weakest. A point called La Canardiere on the shore, east of the was where unopposed, John Walley landed his men. Walley had to get his little army across firstly the and then the before he could attack the enemy defences guarding the city approaches. Frontenac had lined the banks of the with earthworks and was poised to reinforce the position with three battalions of his regulars. In advance of this location he placed militiamen and Indian marksmen led by regular officers. These advanced picquets immediately began to harass the close order battalions forming up before entering the woods. This one sided cat and mouse affair continued for two days.

To cover his land manoeuvres Phip’s had moved the fleet inshore to provide a bombardment of . The garrison responded so effectively with counter battery fire that many ships were damaged, Phip’s flagship was allegedly dismasted and troops from the garrison paddled out in canoes and scooped his personal standard from the river as trophy. Nothing was going the New Englander’s way.

On the 20thWalley decided to force a crossing of the and storm the earthworks beyond. They formed up in the European style and advanced into the hungry muskets of the woodsmen and Indians. Despite bringing up half a dozen brass cannon they could not force their way into the woods and eventually retreated to their boats on the evening of the 21st abandoning most of their guns. It is thought up to 15% of Walley’s force was lost in the abortive attacks whilst French loses were no more than 60 killed or wounded. Phip’s fleet ignominiously sailed for home on the 23rd experiencing many more hardships and loses on the way. So ended the first Anglo Saxon attempt to seize French Canada. 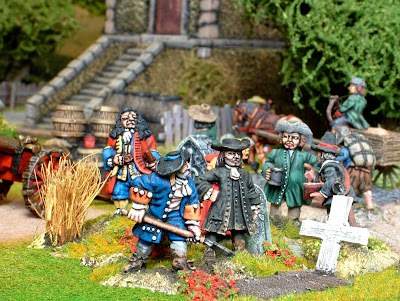