by Barry Hilton October 16, 2013
SCENARIO 2 (WHAT IF) Assaulting the Breastworks
Walley has succeeded in reaching the western shore of the with the majority of his force. He must now carry the breastworks defended by soldiers of Le Compagnies Franches de la Marine. He has lost many men fighting through the woods and his gunners are finding it very difficult to drag their pieces through the dense undergrowth. 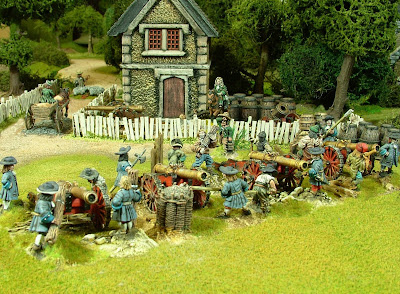 Deployment
The New Englanders and French regulars deploy as shown on Map Two. The French player may then place his militia and Indians anywhere in the woods. 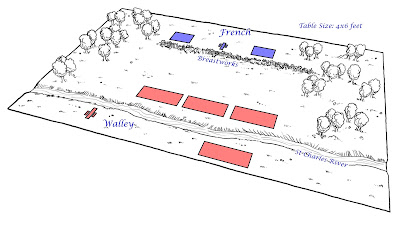 Objectives
Walley must get his men over the French breastworks. The French must prevent this to win. There is no turn limit.

Special scenario conditions
Walley has a single battalion remaining on the eastern shore at the start of the game. He must accrue a score of 13 to get it across the river to support his attack. From turn two he rolls a D6 every turn. He carries a running total of this score. When it reaches 13 then the unit crosses and forms up in line on the following turn when it can then move off.

The breastworks count as hard cover. If the New Englanders succeed in getting over the breastworks with a single battalion the French units all take a morale test at the end of that turn at a -2 modifier. This even applies to French units in melee who are winning. This simulates the psychological effect of the enemy achieving an extremely tough set of objectives and the morale ascendency this would create for Walley’s embattled command.
Share Share on Facebook Tweet Tweet on Twitter Pin it Pin on Pinterest
Back to The League of Augsburg