by Barry Hilton October 23, 2013
SCENARIO 3 (WHAT IF) Open battle – the great men meet!
Phips has persevered with his harassment of the garrison. Frontenac, tiring of the skulking hit and run warfare practiced by his irregular troops has decided to give battle on an open forest grove to the east of . His troops are outnumbered but he feels confident of overcoming the rag tag rabble of the English Pirate Phips.

Deployment
As shown in Map 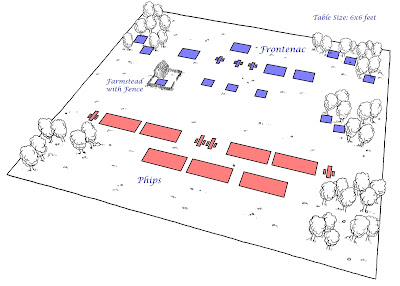 Objectives
To vanquish the enemy and secure the City of for King and Country.
Special scenario conditions
Phip’s Indians operate as explained in the article for Frontenac’s tribesmen.
Uniforms
The Compagnies Franches de la Marine were from 1680 uniformed in grey-white lined blue with blue cuffs, vest, trousers, stockings and brass buttons. The source for this data is http://www.besner.org/1-10-The.Comp.Franche.html. The Militia of New England appear to have worn standard European type clothes and carried similar equipment to their contemporaries in the . At http://www.military-historians.org/company/plates/images/US.htm#za plate of Governor Phip’s Expedition shows men in coats of brown, taupe and red with the standard felt and what looks like fur, hats. There are a series of three Osprey books on American Colonial Troops (#366, #372 & #383). These do have information, prints and plates from the period but I have never been able to get my hands on the books or see them at the usual stockists on the show circuit. 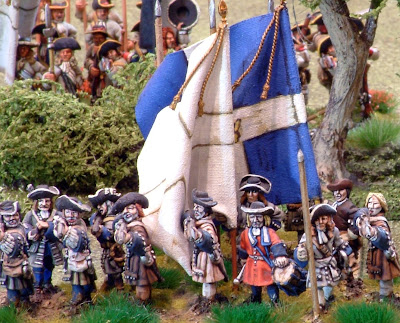 Figures
In 28mm, my preferred scale, the choice of figures is much wider than ever before. For the New Englanders the Grand Alliance/Monmouth Rebellion range from Dixons would be ideal. There are now figures from Reiver Castings. Some of Foundry’s earlier Marlburian range could also be used. Many of  the Warfare Miniatures range could be used with some of the characterful Cuirassier officers guising as minor leaders and the big personalities like Phips and Frontenac.  Any of these could be used for the French regulars. French militia are a little more tricky. Some late ECW or TYW types in ragged clothes may do as may some of the more simply dressed figures from the ranges above. At a pinch later French Courier du Bois or even bonneted pirate figures could be deployed. The Indians can be picked up from a wide variety of sources.
Share Share on Facebook Tweet Tweet on Twitter Pin it Pin on Pinterest
Back to The League of Augsburg