by quindia April 27, 2019
Clarence Harrison - It has been a very long time since I've posted. In fact I haven't really painted anything since.. err.. last November! I don't ever remember sitting out of the hobby for that long. There have been other things going on in my life and it seems like when I've had free time, the painting desk just wasn't calling to me.

As Barry has mentioned, I've been working on artwork for Talon & Claw and the book is almost ready to send to the printer. There is something about this stage of a project that seems to linger and it always takes longer to wade through the final edits, but the end is definitely in sight! 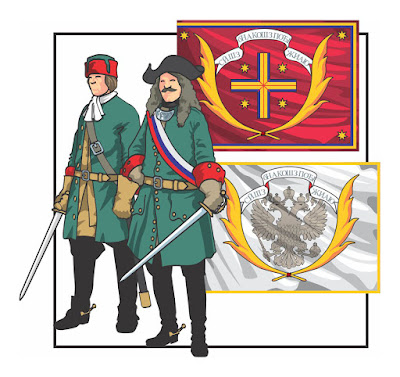 I'm also ready to turn my full attention to Donnybrook Dark, a kind of Gothic horror setting for our popular skirmish rules...

The Mourne Vale lies between the kingdoms of Scandavia and Rusland. This fell region is a land of brooding forests, lonely hills, and haunted ruins, but amid it's desolation lies treasures of a forgotten empire.

The king of Scandavia is wedded to a Fey Queen (some claim ensorceled). The men of Scandavia do not practice magic, but have an alliance with the folk of the Queen and may call on creatures of the forest and darker places when called to war.

The shadowed realm of Rusland is ruled by a dread necromancer. Warlocks and sorcerers march in the armies along side mortal soldiers and they may call on dark powers, marshaling spirits, undead, and other wicked creatures to their banners.

Getting into the spirit, I was moved to actually take a brush to something - a dryad, one of the handmaidens of the Fey Queen. This model is from Reaper Miniatures. 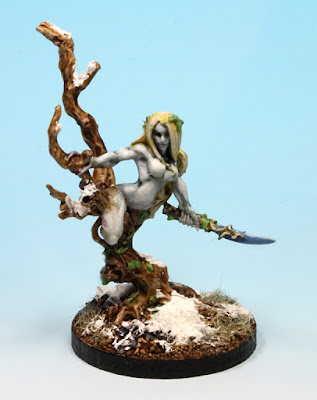 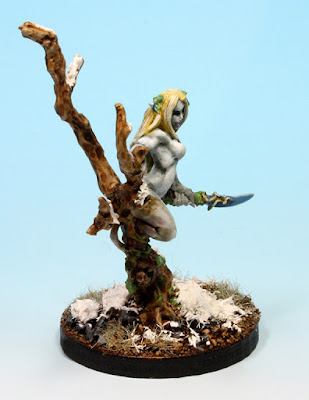 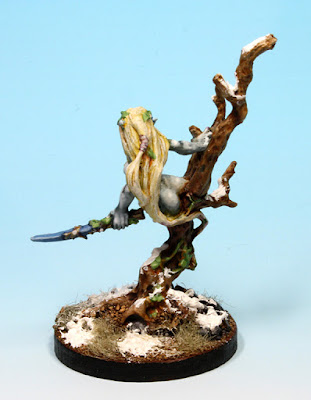 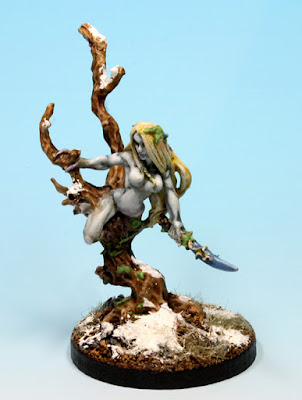 These Fey folk are tree spirits who guard the dark forests of Scandavia, but may sometimes accompany mortal expeditions into the Mourne Vale, often with agendas known only to the Fey Queen. Dryads come in many forms, but the most common often appear as nymphs.

Charm: A dryad may attempt to charm a target within 6 inches. Both roll an Ability Die. If the dryad's score is higher, the target acts under control of the dryad for the rest of the game. If the score is a tie, the dryad controls the target for one turn. If the victim's score is higher, that model is immune to the dryad's charms for the rest of the game. A dryad may only control one victim at a time.

Fey Blade: A dryad may manifest an enchanted blade which is an anathema to the unquiet spirits of Rusland, allowing them to sever the tenuous energy that binds the undead to this plane. These may be actual swords or knives or may take the form of hooked claws as the dryad prefers. They are as deadly as normal blades would be against mortal foes as well.

Options: Lesser dryads or wood sprites (d6) lack the Fey Blade ability but are often encountered in small groups. The dreaded treekin (d10) replace the Charm ability with Terror which causes all mortal enemies within 12 inches and line of sight to test morale.

Or something like that. I'm still writing and I'm not sure these are the final rules for this creature.

I have some good ole fashion cuirassiers on the table next, also for Donnybrook. I'm hoping to be a little more prolific with my painting so hopefully my next post won't be as long in coming.