As part of the Eastern Expansion initiated by Toggy I received a large box containing 47 painted Polish cavalry from the brush of talented Rob Goodyer.


Perry Brothers' sculpting has come a long way form the 1990s but these models still have a charm all of their own and hold the same place in my heart as Mark Copplestone's big handed Grand Alliance sculpts which were released by Dixons in the 90s. The character is all there even if anatomical ideas for sculpting have moved on.


I had several of these models of my own but alas sold them in a moment of weakness sometime between 2004 and 2010. I have no idea where my own efforts went although thankfully some photos of them still exist in WI from days past.


Anyway, back in the now.. I had to organize the figures from Bob and Rob into units and so chose to place the Pancerni models into two twelve model units giving four squadrons in total. 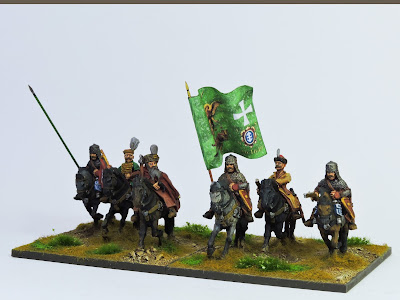 As the lances for these were not complete I chose to theme the lance colours and coordinate those with the banner colours. I picked out a red and a green banner for the two lead squadrons and those figures requiring lances were given said weapons in the colour of the flags. The rearward squadrons had to take what was left after I had given some Eagle banners to the superior caste Winged Hussars.

As we are going to use these models primarily for a period past the zenith of the Polish cavalry's legendary heyday of 1620 -1690 the Pancerni are equipped with a variety of weapons and not just lances.

As 'supporting' cavalry they are often not seen as being in the same league as their legendary brothers in the boas but the Pancerni as proven here can look pretty impressive too.

A couple more units of these should make the Polish cavalry horde complete but for now - marvel at the Perry classic sculpts of yester-year, Rob Goodyer's lovely painting and some attractive table top units set off by pretty flags and neat basing.
Share Share on Facebook Tweet Tweet on Twitter Pin it Pin on Pinterest
Back to The League of Augsburg