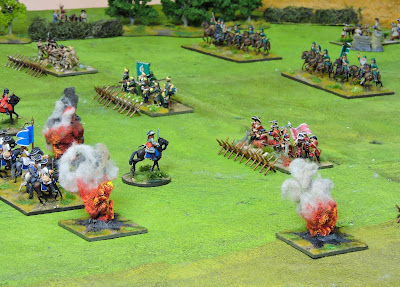 Toggy and I ran the race today: 10 Turns, 4 competitors and all to play for!

The objective is to breach the French defences and capture their Marshal in the camp at the far end of the table.The game is played long ways on an 8 x 6. The player forces were as follows:

The The French camp had three layers of protection:

On the flanks were more field guns and behind a brook on the French left was a super heavy mortar raining down carnage on the advancing Germans!

The process:
Each turn the players throw a D4. They can then move between one and four of their squadrons. They can also play cards to foul up their 'Kameraden'!


Turn 1: In the photo above from left to right the light blue die denotes the Bavarians, the red - Saxons, the White, Prussians and the yellow - Austrians. As the forces race towards the first obstacle the Prussians and Austrians have mass with three squadrons each moving in the turn.

Turn 2: The Bavarians are first to launch a charge and destroy the French dragoons whose chevaux de frise were badly positioned thus offering no protection. The second mortar barrage throws back a Prussian squadron and hot fire from the French dragoons forces both the lead Austrian and Saxon squadrons to veer away from their targets. 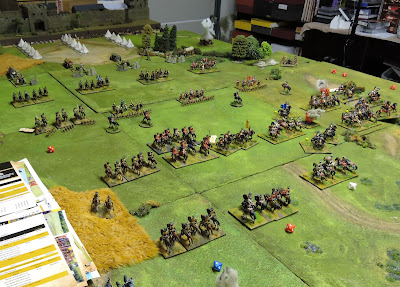 Turn 3:  The over ambitious Bavarians try a follow on charge when disordered but fail and have to fall back. The lead Saxon squadron crashes through the chevaux and minces the dragoons. The Austrians are in a right old pickle and the Prussians have left half the regiment on the start line! 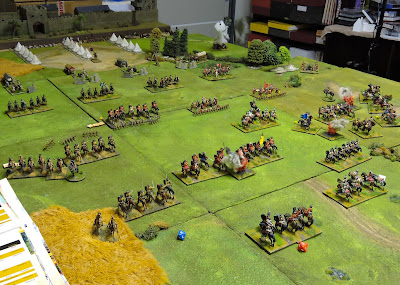 Turn 4: The Saxons are showing the most promise. The Bavarians seem to be consolidating for the next jump. The Prussians are very strung out and the Austrians are all over the place being hit by cannon, mortar and musketry fire. 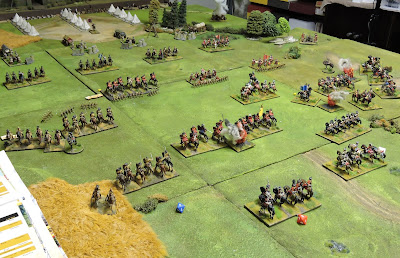 Turn 5: The Bavarians are forging ahead with a squadron ready to face off the French mounted dragoons. The lead Saxon squadron has routed under cannon fire and taken the brigadier with them. The Prussians seem to be making little headway whilst the Austrians are mostly out of shot to the right having been repeatedly thrown back by fire. 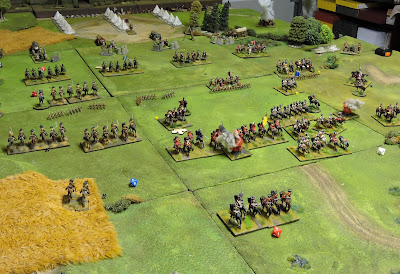 Turn 6:  It's all about the Bavarians who have now routed their mounted dragoon opponents and are going for a disordered push on to take out the gun line. Saxons and Prussians are routing in the centre although a single model (stand of three in the upper right centre) is trying to sneak through for the Prussians. The Austrians are slowly but surely re-organizing for a panzer push! 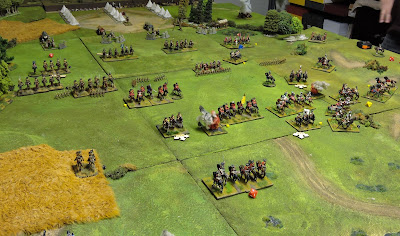 Turn 7: A charge too far! Now the Bavarians are in bits having been routed and thrown back by artillery fire from front and left flank (out of shot). Surprise, surprise! The Austrians have cleared the dismounted dragoons but in the centre the stoic Irish dragoon battalion has already seen off three or four Prussian charges. The Saxons and Austrians are neck and neck and ready to jump on towards the guns! 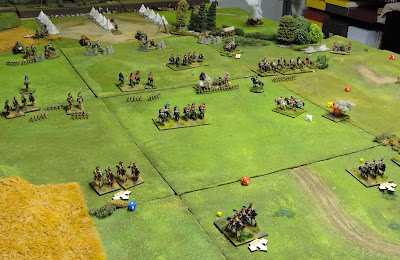 Turn 8: Shock! A follow on charge has taken a Bavarian squadron over the gun line and destroyed the battery ( top left). A depleted Austrian squadron is about to charge the gun to its front and the Prussians are still trying to get past those bloody stubborn Irish dragoons at the first fence. The Irish are nailed to the ground! Saxons sneaking back up to try a push for the camp. 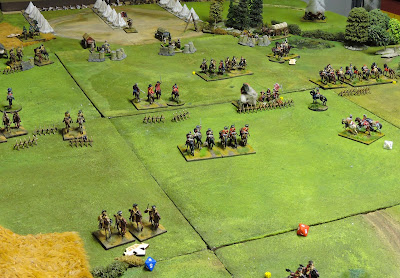 Turn 10:  How it finished. The Bavarians win it by a nose. Formed up and ready to charge into the camp but not there yet so no coconut! The Austrians have two squadrons ready to go for the gun line. The Prussians have finally wiped out the Irish but now face their mounted brethren.

We were laughing so much we didn't even realise the race was over. The French Marshal survived and the remaining non routed models were: