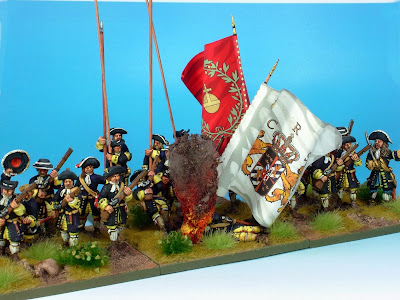 Barry Hilton - I'm into BLUE these days. Not hugely layered and highlighted shades of blue but dense, flat, slap you in the mush sort of BLUE. It is a technique I have seen used before by people in the hobby I respect very much such as Dave Andrews. Make the primary uniform colour of the model flat and dense. Contrast everything else against that mass. I think the effect is very pleasing. 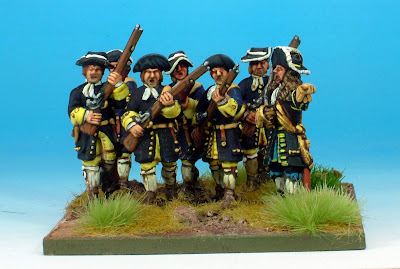 With the emergence of my venerable Swedes from retirement for a rare table top appearance at LOA DERBY 12/13 Nov 2013 I faced a perplexing problem. I rummaged through more than 40 box files looking for three missing battalions... Dal 1, Dal 2 and Ostergotland. Could I find 'em?... only after over two hours of fruitless searching did I realise why I couldn't find them.. I sold them last year!!! 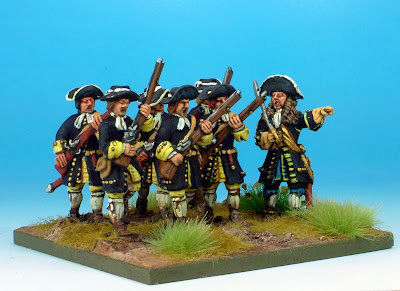 So, I had rostered 7 Swedish battalions but in fact possessed only 4 serviceable. So I set myself a bit of a task.. finish one (6 models) and paint another from scratch (25 models) in a week whilst also organizing the scenarios for the weekend, cleaning out my mother's house, doing my day job and trying to keep fit... yup, typical week for yours truly. 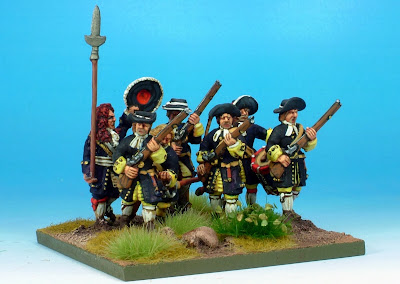 Anyway, the task was made easier by the motivation of watching my DEEP BLUE chaps take shape. I resisted the temptation to paint my residual Musketeer Miniatures and decided to complete a unit which could be used in the NYW as Lowenhaupt's or Oxenstierna's in Dutch service. 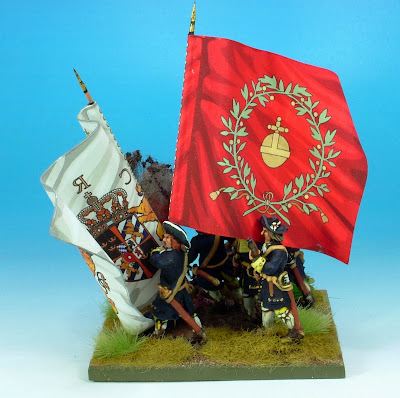 I didn't have time to do flags from scratch and I knew these boys would have their first outing against Gunter Heim's Saxons so I use the Uppland flag designed by Clarence. It fits rather nicely I think and I may just leave it in place when the blonde boys take the field in Flanders pre 1697. 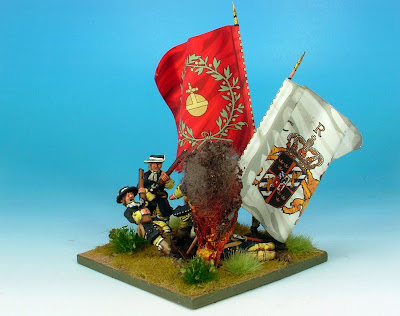 You may be interested in the little explosion scene happening on the central base (more of that in a series I am writing for the blog now on Story telling with model soldier vignettes). The explosion.. mortar shell? grenade? is made from steel wool suitably worked up.

The falling chap next to the colonel's colour is another Warfare mini which I have never put on commercial release. I have a few lying around. He was designed with the casualty pack but dropped we only wanted to use five from six. 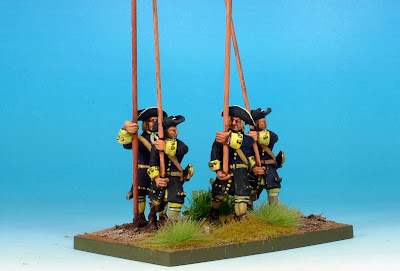 Lots going on here. I like the look of the unit. One more innovation is the slightly smaller pike base gone from 60 x 60mm to 60 x 40mm. Gives us back a little table space! 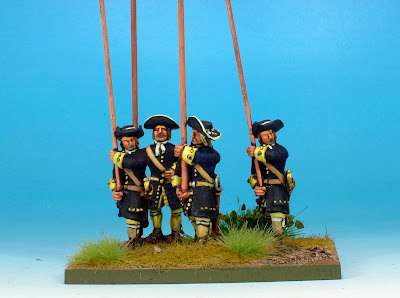