Where we have differed from existing conjectural flags which have been available for some time from other sources, it is for reasons we deemed logical and equally possible. 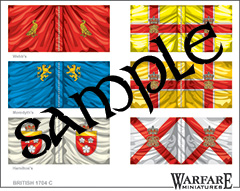 One battalion of the 1st Guards, two battalions of Orkney's (Royal Scots), Ferguson's (Cameronians), Rowe's (Scots Fuzileers), Webb's (which was Beaumont's/Princess Anne of Denmark's)), Marlborough's which was Dering's old regiment ( the colonel was John, Duke of Marlborough), Churchill's which became the Buffs ( under Charles his brother), Meredyth's (a relatively new regiment formed in 1703),  Lord North and Greys (The Earl of Bath's old regiment), Frederick Hamilton's ( formerly The Earl of Granard's , then Meath's- one of the old estabished regiments of Ireland), Derby's (Robert Hodge's old regiment), Howe's which was Clifton's old regiment  and Ingoldsby's (Charles Herbert's regiment). To make up the fifteen over the five sheets we added everybody's favourite regiment Portmore's (previously Piercy Kirke Senior's and soon to be Piercy Kirke Junior's!) 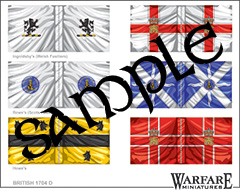 Several of these regiments in their previous guises have appeared in our games over the years. 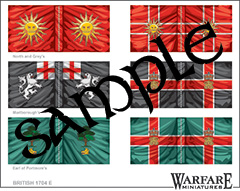 Clarence has done a wonderful job on these and of course they are pre Act of Union so the Union flag which had been in use by the Navy for nearly a century, still had not been adopted by the army for its  regimental colours.
These five sheets are available here...