by Clarence Harrison April 10, 2017
Clarence Harrison - I have posts on the way about my trek across the pond (organizing my notes and photos), but I'm working around the house today reorganizing my figure cabinet. I'd run out of space to display my LoA collection and several units have been cluttering my painting desk. Here is my entire collection so far... 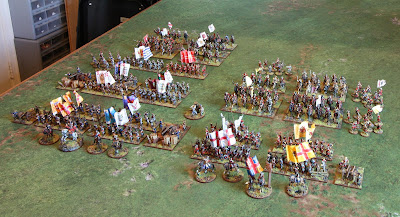 Fourteen battalions of foot, fourteen squadrons of horse and dragoons (including two squadrons of ECW cavalry I use as rural militia), two detachments of dragoons on foot, a detachment of converged Dutch grenadiers, two battalion guns, two field guns, and eight commanders.

This project will never really be done, but for my initial goal of replaying the Boyne I am getting close! I still need to paint:

After this, I'll just start smaller goals of adding a brigade at a time. I want to paint three more battalions of Danish foot to complete the entire contingent in Ireland, three or four units in civilian attire to use as Irish troops for either side, two or three battalions of French for 'what if' games (or the action at Duleek), and the Dutch Guard Dragoons (though Warfare Dragoons with fur caps are still on the horizon).

The ultimate goal is to amass enough troops for a multi-player LoA weekender in Virginia (the Boyne game would certainly be a candidate).

Anyway, back to work! I just saw all of the models laid out on the table as a photo opportunity...